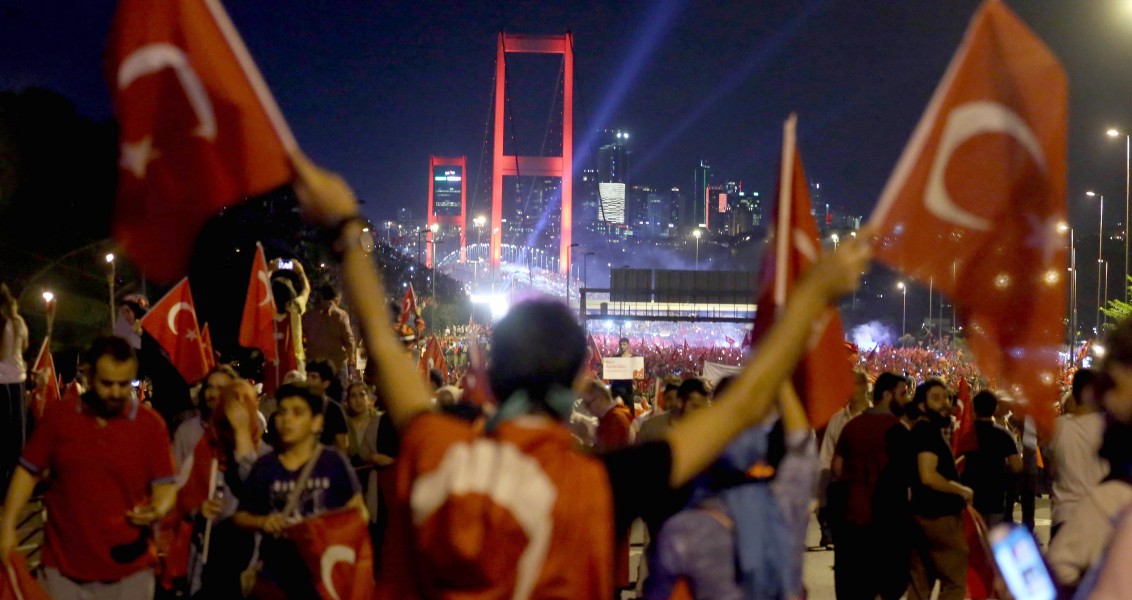 The coup attempt that shook Turkey on July 15 was an important test for Turkish democracy, and Western democracy as well. Turkey passed this exam and, in addition, it brought great contributions to the country’s democratic culture. The coup attempt, behind which was an organization that for 40 years had extended within state institutions and had created ties in the international arena, was stopped by the resistance of the people.

Many citizens went out to the streets as soon as they got news of the coup attempt.

Nevertheless, after the call from President Recep Tayyip Erdoğan upon the people to protect democracy, they started to march en mass. The people stood in front of tanks and stood up to heavily armed coup forces.

Unfortunately, these images are not transmitted in the Western media. However, the resistance of many Turkish citizens during the coup attempt made history. Currently, thousands of images that show this are available on social media and in Turkish media. As you watch these images, the brutality of the coup forces, the civil resistance and their strong character is obvious. Everything is clearly evident.

How could Turkish citizens be so determined to stop the coup attempt? There is no single answer to this. Without a doubt, Erdoğan’s call was crucial. However, this is not enough to explain why the people responded to that call without hesitation, or even why people did not care when the soldiers fired on them.

To start with, Turkish citizens considered this attempt abnormal and historical. The socio-political environment on July 15, 2016 could not provide a basis for a coup in Turkey. Certainly, affected by the Syrian civil war, Turkey is struggling with terrorism and political tensions have never subsided. However, the people considered these problems as resolvable within the system through political means. It is exactly because of this reason that on the night of July 15 the people believed that with their intervention the system easily could return to normalcy and that history could advance at its natural pace. From the images available on social media from July 15-16, it is possible to see how women and men tried to convince the soldiers that what they were doing was wrong and they were claiming that the soldiers were deceived.

Second, nearly all the people in Turkey believe that Fethullah Gülen was behind the coup attempt, and as a response to these actions their anger literally turned into madness. Even with the public aware of Gülen’s secret organization within state institutions, no one thought they would dare take such a step.

Moreover, the people believe that there was an international conspiracy against Turkey behind this coup attempt. For this reason they considered the coup as an attempted occupation.

Another important point was the people’s reflex to protect their daily lives. After 2000, the Turkish economy and national well-being increased considerably. The modernization policies that were applied after 2000 provided possibilities, that until then, Westernization policies had not. After 2000 the civil-military relations in Turkey favored the citizens, and this was one of the elements that increased the civil resistance. This contributed to the internalization of democratic culture. After 2000, the ideas that the military has the right to intervene when something is wrong with the system lost its importance for the people. When the military tried to intervene with an e-memorandum on April 27, 2007, the government opposed it and the military took a step back. This lingered in the people’s memory. The people considered this coup attempt an oppression of popular sovereignty and this made it easier for them to stand against the coup.It is true that Turkish democracy successfully passed the exam on July 15. The political institutions, parties, different parts of society, businesses and media performed well.

Unfortunately, the same thing cannot be said for the West. The attacks from Western states on Turkish democracy will remain a black stain in the history of democracy. Directly after the news of the coup attempt came out, the Western media and politicians considered the situation a power struggle between two legal powers. Moreover, these states were disappointed after the coup attempt failed. Especially statements in the media like: “Is there democracy in Turkey?,” “In Turkey the military is the most Western fraction,” “Except Erdogan, everyone else can be” and “There were no civilians in the streets during the coup night, there were only military powers” showed the evil and hypocrisy that Turkey faces.

How to Prevent another Coup In Turkey
Previous

It Is Not Against What Us Is, But What Us Does
Next
Loading...
Loading...
We use cookies to ensure that we give you the best experience on our website. If you continue to use this site we will assume that you are happy with it.Ok