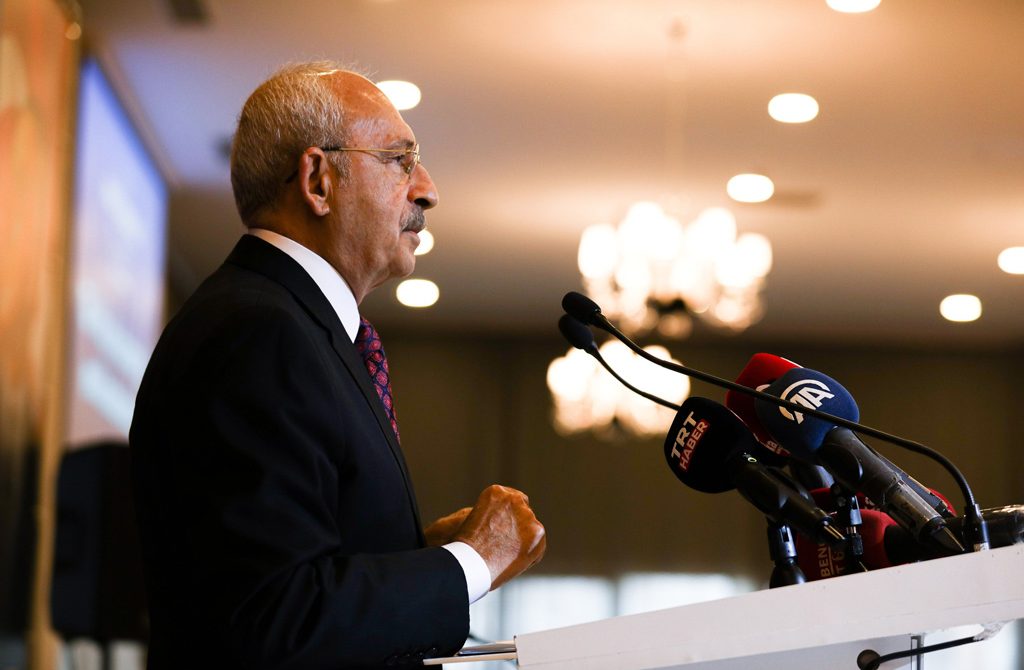 Turkey’s political elite are talking about the circumstances under which the 2023 elections will take place. President Recep Tayyip Erdoğan, who overcame many hurdles in his political career to grow stronger and stronger, says the country could face certain attacks ahead of the next election. That warning is rooted in past experiences, namely a series of attacks since 2013 – including the July 15, 2016 coup attempt.

Kemal Kılıçdaroğlu, who chairs the main opposition Republican People’s Party (CHP), expresses concern from a different standpoint. He says that he won’t discuss constitutional reform with the Justice and Development Party (AK Party) under any circumstances, claiming that such negotiations would “grant legitimacy to the authoritarian government.” He uttered those words right after describing the Peoples’ Democratic Party (HDP), which cannot distance itself from the PKK terrorist organization and faces a closure case, as a “legitimate counterpart.” At the same time, Kılıçdaroğlu speculates that Erdoğan will “escalate tensions to the highest level and call for elections.” He argues that “certain groups could take up arms and carry out political murders” – murders he ties to the president, who, he says, “will explore every avenue to stay in power.”

Ironically, that threat is actually posed by opposition parties willing to do anything to get rid of Erdoğan. They have explored all kinds of avenues in the past, and they will do the same thing again today. It is no secret that Turkey’s top enemies, the Gülenist Terror Group (FETÖ) and the PKK, threw their weight behind the CHP’s brand of opposition on various occasions. Indeed, Kılıçdaroğlu’s attempts to be “proven right” by foreshadowing certain developments are now beginning to catch everyone’s attention. Yet, the main opposition leader seems to think that he gets to accuse the government of “openly fueling tensions,” while his party’s members and pro-CHP media outlets promote “veiled tensions” without anyone noticing.

To reject talks with Turkey’s president, for whom 52% of the people voted, on constitutional reform in order not to “legitimize the authoritarian government” is an accusation directed at the people’s will. At the heart of the current level of polarization in Turkish politics is the opposition’s commitment to “getting rid of Erdoğan no matter what” and the discourse of “dictatorship.”

Nowadays, Kılıçdaroğlu talks about “political murders” to draw the spotlight in his own way. At the same time, he attempts to avoid criticism for collaborating with the HDP and viewing that party as a “legitimate counterpart” in attempts to address the “Kurdish question.” Yet the main opposition leader’s charge of “escalation” cannot hide the fact that the coalition he formed with his “friends” at home and abroad is deeply problematic. How could the CHP, which cannot even get the HDP to engage in some level of self-criticism, stand up to the demands of PKK/YPG terrorists and separatists? Instead of playing games and hinting at the possibility of “political murders,” Kılıçdaroğlu should present the opposition’s vision for Turkey’s future to the electorate without delay.

The opposition’s mentors know too well that the makeshift coalition that the CHP leader put together has no common ground except anti-Erdoğanism and that they look “as fragile as they did in the 1990s.” Indeed, Kılıçdaroğlu’s coalition cannot generate a positive vision with concrete policy proposals for Turkey’s future. As such, it cannot stop being fragile.

Turkey’s opposition parties would lack a common ground to create a shared narrative of democracy, even if they were to agree on an “augmented and reinforced parliamentary system.” The presidential system, which they staunchly oppose, did not emerge in a vacuum. It was shaped by the struggle against the guardianship regime to overcome the crises caused by the political system that the 1982 Constitution put in place. In other words, Turkey got to where it is now thanks to Erdoğan’s 16 years in charge, by breaking the chains that domestic and foreign “guardians” put on the country. Indeed, politics, as an institution, became the most important phenomenon shaping our future as a result of that process.

The “augmented and reinforced parliamentary system,” by contrast, threatens to reinstate the guardianship regime, which Turkey dismantled through hard work and sacrifice. Keeping in mind the deep crisis that coalition governments with two or three partners threw Turkey into in the 1990s, there is no telling where a coalition with six or seven members could take the country.

At a time when the global system is undergoing rapid changes and Turkey is raising its international profile by taking advantage of geopolitical voids, such a coalition could cost the country more than what they cost it in the 1990s.

What does Iran want in the South Caucasus?
Previous

'Political murders': What is this all about in Turkey?
Next
Loading...
Loading...
We use cookies to ensure that we give you the best experience on our website. If you continue to use this site we will assume that you are happy with it.Ok