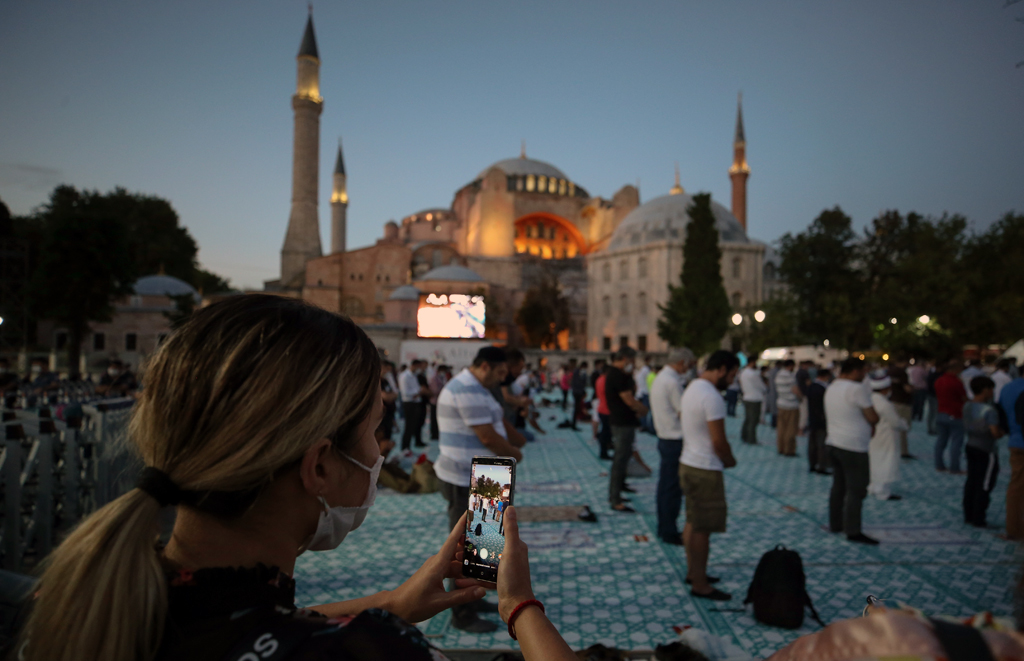 ISTANBUL, TURKEY - JULY 26: People perform prayer outside the Hagia Sophia Grand Mosque after it was reopened for worship for the first time in 86 years with Friday prayer in Istanbul, Turkey on July 26, 2020.

The resurrection of Hagia Sophia

The Hagia Sophia Grand Mosque's reopening, an embodiment of Turkey’s free will, could not have been possible without Erdoğan’s leadership and the Turkish people’s confidence in him. Hagia Sophia’s "resurrection" has become a symbol of Turkey’s efforts to become a prominent player in the international arena. A missing piece of our national identity has thus been put back in place. No politician would ever dare to reverse this decision as long as Turkey remains a democracy.

The Hagia Sophia became a mosque once again following last week’s Friday prayer. I was pleased to witness that blessed day.

That first Friday prayer in 89 years was very symbolic. The joy of hundreds of thousands of people merged with President Recep Tayyip Erdoğan’s recitation of the Qur’an, the two green banners atop the minbar and the historic visit to Mehmed the Conqueror’s tomb.

The Hagia Sophia Grand Mosque’s reopening, an embodiment of Turkey’s free will, could not have been possible without Erdoğan’s leadership and the Turkish people’s confidence in him. Hagia Sophia’s “resurrection” has become a symbol of Turkey’s efforts to become a prominent player in the international arena. A missing piece of our national identity has thus been put back in place. No politician would ever dare to reverse this decision as long as Turkey remains a democracy.

Some welcomed the Hagia Sophia’s reclassification as a mosque by chanting Takbir. Others felt remorse, which they could not freely express out of concern that it would play into Erdoğan’s hands. Unlike Turkey’s concerned secularists, the majority of Muslims around the world were at the Hagia Sophia in spirit. Those who were there in spirit, but could not find a place inside the mosque to pray, were no less excited and present than those inside. Indeed, the Hagia Sophia will always remain open to worship by Muslims. The people who buried the pain of that mosque serving as a museum for years now rightfully celebrate this reunion.

To come from a Muslim conservative background, yet failure to feel the joy of the Hagia Sophia’s resurrection is, in my view, unfortunate. Those who turned down the invitation to attend last week’s Friday prayer and stated that they had not dreamed of praying at the Hagia Sophia in their youth missed out on this blessed moment. I felt sorry for their lack of fortune on their behalf.

International expressions of disappointment and regret won’t result in anything except an eventual acceptance of Turkey’s decision. With the exception of the Greek government and some Christian clergymen, the Hagia Sophia’s reclassification is not expected to entail a serious political wave. The Western media will resume its ideologically-charged campaign by claiming that Turkey intends to reinstate the caliphate. Political leaders will occasionally employ certain symbols but ultimately focus on real interests and calculations. From their perspective, Turkey’s moves in Syria, Iraq, Libya and the Eastern Mediterranean will be the only steps worth considering. Symbols and ideological labels will only be invoked to resist those moves. At the end of the day, Ankara won’t stop trying to protect its national interests proactively just because some people describe Turkey’s policy as neo-Ottomanist or Islamist.

Turkey’s dynamic foreign policy is informed by a commitment to regional stability, rather than ideology. The country protects its national security interests and engages other players, whether in competition or cooperation. As the meaning of alliances is redefined in the international system, fresh power vacuums will continue to emerge. Needless to say, individual leaders make a big difference in terms of each nation’s ability to fill those vacuums. That U.S. President Donald Trump recently criticized his opponent, Joe Biden, by saying that the Democratic candidate cannot compete with smart world leaders like Xi Jinping, Vladimir Putin and Erdoğan. As former national security advisor John Bolton stated in his book, Trump does not place any European leader, including French President Emmanuel Macron, in that category.

In other words, the reversion of Hagia Sophia into a mosque under Erdoğan’s watch was directly related to the Turkish president’s performance as a leader. Erdoğan’s opponents attempted to prevent him from engaging in identity politics by not challenging the decision to reclassify the Hagia Sophia. Orhan Pamuk was the most vocal critic of that silence: “(The decision) shows that Turkey no longer respects the secularism of its founding father Kemal Atatürk. They are saying that they want to be populists, unhappy with the West.”

In other words, Pamuk is unhappy with the opposition’s silence in the face of a step to “undermine Westernization and Kemalist secularism.” He is indeed lagging behind.

Main opposition leader Kemal Kılıçdaroğlu knows too well that any public debate regarding the Turkish people’s values and symbols will serve Erdoğan’s interests. This nation’s perception of the West, too, has changed considerably. Pamuk, however, was right about one thing: The resurrection of the Hagia Sophia challenged the view that Erdoğan’s AK Party embraced “Kemalist statism” and pleased Turkey’s conservative voters.

Whether or not the opposition objects to his decisions, Erdoğan seems to win.

Reversion of Hagia Sophia: Normalization of Turkish politics
Next
Loading...
Loading...
We use cookies to ensure that we give you the best experience on our website. If you continue to use this site we will assume that you are happy with it.Ok