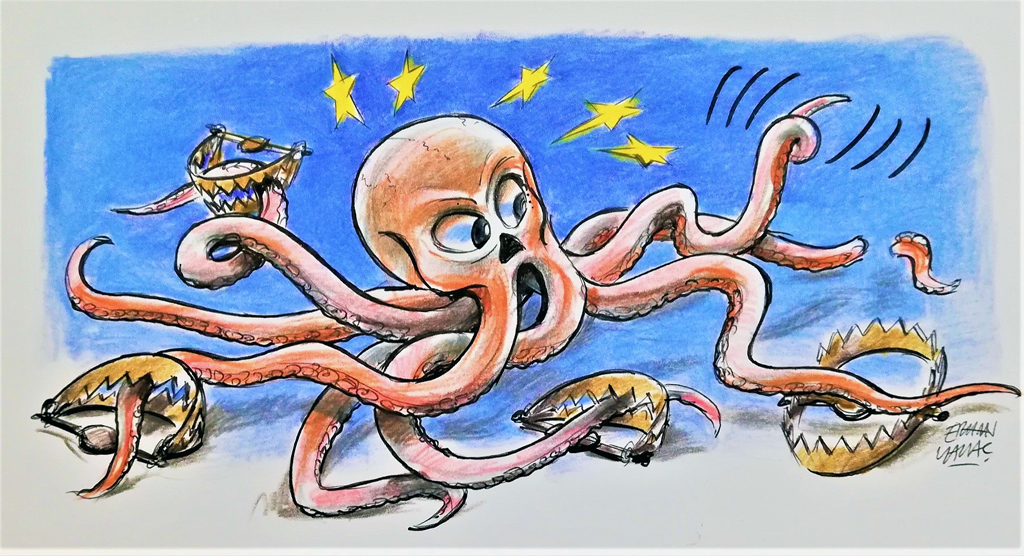 The new face of anti-Turkey rhetoric

The latest escalation in Nagorno-Karabakh reignited anti-Turkey rhetoric in the international arena. Turkey, under President Recep Tayyip Erdoğan's leadership, threw its weight behind Azerbaijan to help the country reclaim its Armenian-occupied territories.

The latest escalation in Nagorno-Karabakh reignited anti-Turkey rhetoric in the international arena. Turkey, under President Recep Tayyip Erdoğan’s leadership, threw its weight behind Azerbaijan to help the country reclaim its Armenian-occupied territories.

Armenia’s prime minister, Nikol Pashinian, made a huge mistake by attacking Azerbaijan’s Tovuz region on July 12. To cover up his miscalculation, the Armenian premier doubled down on violence and fueled anti-Turkey and anti-Erdoğan sentiment by accusing Ankara of “resuming the genocide” – as if Erdoğan, not Pashinyan, started the conflict. Certain groups in the United States, Europe and the Gulf, too, echoed Armenia’s claims.

One could easily think that Armenia, in recent weeks, has been fighting Turkey, as opposed to Azerbaijan. A French magazine even referred to the Nagorno-Karabakh clashes as “Erdoğan’s new war.” The Turkish president, they say, opened a new front in the South Caucasus following his operations in Syria, Libya, the Eastern Mediterranean, Iraq and Cyprus.

Le Point, a French magazine, took anti-Erdoğanism to the next level by comparing Turkey’s president to Adolf Hitler and accusing him of promoting Ottoman nationalism to “go back to the good old days.” The magazine pointed out that Erdoğan, once again, stole Emmanuel Macron’s spotlight, which is undoubtedly the cause of France’s current aggressiveness.

Azerbaijan openly questions France’s involvement in the Minsk Group and urges Turkey to be at the negotiating table. Macron may think that picking on Erdoğan’s vast experience is a good way of hiding his own inexperience, but he’s not fooling anyone. The desperate aggressiveness of Eurocentric vanity is all too familiar.

Whenever Ankara makes a new foreign policy move, the Western media comes up with new labels, which are not necessarily compatible with others: The new sultan. Caliph. Dictator. The minds behind the ideologically charged fight against Turkey cannot seem to make up their minds. Is Erdoğan an Islamist leader of the Muslim Brotherhood? Is he a neo-Ottomanist? A pan-Turkist or a Eurasianist? Or, perhaps, a leader who embraced nationalism to make up for his declining popularity? A neo-Kemalist?

Obviously, the Turkish president is none of these things. He is a strong, experienced and talented leader who strives to safeguard Turkey’s national interests.

Turkey’s activism with its new foreign policy is not rooted in ideology but rather it reflects an ability to identify changes in regional and global affairs. The country’s goal isn’t territorial expansion but to strengthen its agency.

Le Point certainly took the anti-Turkey rhetoric to the next level by drawing parallels between Erdoğan’s unofficial nickname, Reis (Chief), and the word Führer. Turkey’s adversaries add fairytales about military aggression to their existing stories of authoritarianism. At the heart of this new rhetoric is their unhappiness over Turkey’s military operations, which were designed to safeguard its interests. They seek to target Turkey’s military footprint in Syria, Libya, Qatar, Iraq, the Eastern Mediterranean and Cyprus – not to mention Erdoğan’s leadership style and ability to take initiative at times of crisis. They are indeed jealous of Turkey’s latest moves and initiatives.

The same people who do not question the military presence of the United States, Russia, or France in those parts of the world keep attacking Erdoğan in an attempt to contain Turkey. Ankara faces the charge of expansionism whenever it attempts to help manage crises in its own part of the world.

Judging by that rhetoric, one would think that Bashar Assad and his sponsors, Russia and Iran, did not start the Syrian civil war. One would assume that putschist Gen. Khalifa Haftar and his sponsors, including France, declared war on Libya’s U.N.-recognized government. One could indeed think that Nikol Pashinian and his reckless sponsors did not restart the fighting in Nagorno-Karabakh. Saudi Arabia and the United Arab Emirates, one could assume, did not blockade Qatar and attempt to overthrow its government.

A “great power competition” has become the name of the game in the international arena with the United States creating a power vacuum by withdrawing from regional and global theaters. Russia, Iran and Israel are picking up their pace in the game. This is a time when one’s absence from the theater often results in one’s inability to safeguard its rights. Under those circumstances, nobody has the right to tell Turkey to refrain from using hard power.

Actors and perspectives in the Nagorno-Karabakh conflict
Previous

Analysis: TurkStream | The U.S. Opposition and the Reasons behind It
Next
Loading...
Loading...
We use cookies to ensure that we give you the best experience on our website. If you continue to use this site we will assume that you are happy with it.Ok