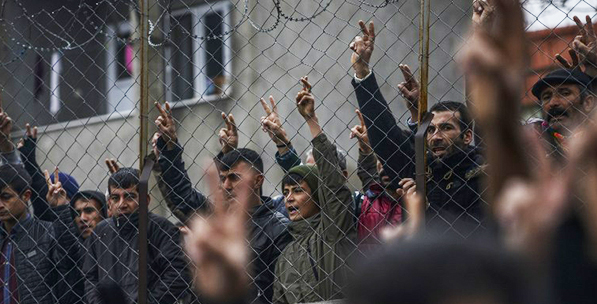 The PKK's new strategic discourse in its fight against the state is determined by the HDP's leadership which has recently brought up the self-governance' debate. In this way, the HDP's organic connection with the PKK has been proven with the party's own hand.

In the past week, the Democratic Society Congress (DTK), a component of the PKK, placed the concept of self-governance at the center of its concluding declaration and said: “We take up the self-governance declarations of people’s assemblies.”

This announcement was understood as a declaration of autonomy by the Turkish public and caused serious disturbance. The president and other government officials gave various responses to the announcement. For example, presidential spokesman İbrahim Kalın said: “Fantasies such as separation, division, autonomy, self-governance [and] canton administration do not find a response within societies acting with democratic maturity.”

HDP Co-Chair Figen Yüksekdağ characterized these reactions on the part of the government as “asking not for democratic politics but for conflict, fighting, and death.”

THE CALL TO KURDS TO RISE One important factor that must be kept in mind throughout this debate on self-governance is that it has come on the agenda at a time when the PKK has re-started its armed struggle against the state since July 14, 2015 and wants to carry this struggle to a new dimension.

What does a new dimension mean?

Since July 14, the PKK has been digging trenches in cities it believes to have support in, in the southeast, and is attempting to gain territory while insulating itself and using the civilian population as human shields. At the point where we have arrived, the PKK has announced that it will begin terror attacks throughout Turkey and not just in the southeast – within this context it has called on all Kurds in Turkey to rise up. The new dimension the PKK is attempting to add to its struggle is to carry the battle to all of Turkey.

With this setting, the statements made by the PKK’s two leaders, Bese Hozat and Cemil Bayık, are noteworthy. In his statement to Kurds living in Turkey’s metropolises, Hozat claimed that it is “legitimate to attack whatever belongs to the AKP [Justice and Development Party – AK Party]”. In his turn, Bayık said: “We foresee the establishment of a revolutionary resistance front with other organizations coming from within and outside Turkey.”

In this tense environment, the Peoples’ Democratic Party (HDP) is wholeheartedly and openly supporting the PKK, having completely left behind its pledge of being Turkey’s party that it campaigned in during the Aug. 10 presidential and June 7 parliamentary elections.

THE HDP’S CHANGING ROLEIn order to support the PKK, the HDP has proposed the concept of self-governance in a very dogmatic manner. As reflected in HDP Co-Chair Selahattin Demirtaş’s statements, the HDP claims that political struggle in Turkey is between self-governance and dictatorship. This state of the HDP is transforming it into a factor receiving less and less support from the people. While some party elites are uncomfortable with this situation, it appears that the HDP has no choice but to support the PKK’s new strategy without question. The reason for this is the PKK’s organic connection to the HDP, as well as that the HDP grew by profiting from the presence of the PKK in the east and southeast.

Another factor is the need the PKK feels for the HDP, now more than ever before. Interestingly enough, this is not true just for Turkey. The PKK’s Syrian affiliate Democratic Union Party (PYD) also seriously needs the HDP’s lobbying activities on the international arena in northern Syria.

If I am to be clearer, the HDP starting up a debate on self-governance over the PKK and keeping to an increasingly radical discourse, is due in large part to the ongoing power struggle in northern Syria. Specifically, the PYD’s capture of Jarabulus and the creation of a PYD Kurdish corridor has become one of the main targets.

In this context, the PKK thinks it has gained a historic opportunity. It thinks that it has gained U.S. support with the rhetoric of the struggle against DAESH while also thinking that it is protected by Russia because it supports Russia’s irredentist policies in Syria. At the same time, it believes itself to be conducting smooth relations with Iran and the Syrian regime, and thus that it can establish an independent Kurdish state.

THE HASTINESS OF THE PKK AND HDPOf course, the critical question here is what will happen when the interests of the various actors supporting the PKK conflict cease to intersect. The PKK does not regard this as a small possibility and is therefore attempting to gain as much territory as it can on the battlefield.

At this point, the PKK regards Russia as its closest ally. Demirtaş’s visit to Russia was about clarifying the frame of this support and to make it as permanent as possible.

The HDP has left its becoming Turkey strategy far behind. Since July 20, the HDP has attempted to legitimize PKK violence. Now, with discourse on self-governance, it is attempting to obstruct the increasingly intense operations against the PKK. It is working to increase mass support for the PKK.

Those who want to understand the debate on self-governance, not as a regional management issue, but as a national security problem, should keep these factors in mind.

Thinking Development in Troubled Waters
Next
Loading...
Loading...
We use cookies to ensure that we give you the best experience on our website. If you continue to use this site we will assume that you are happy with it.Ok