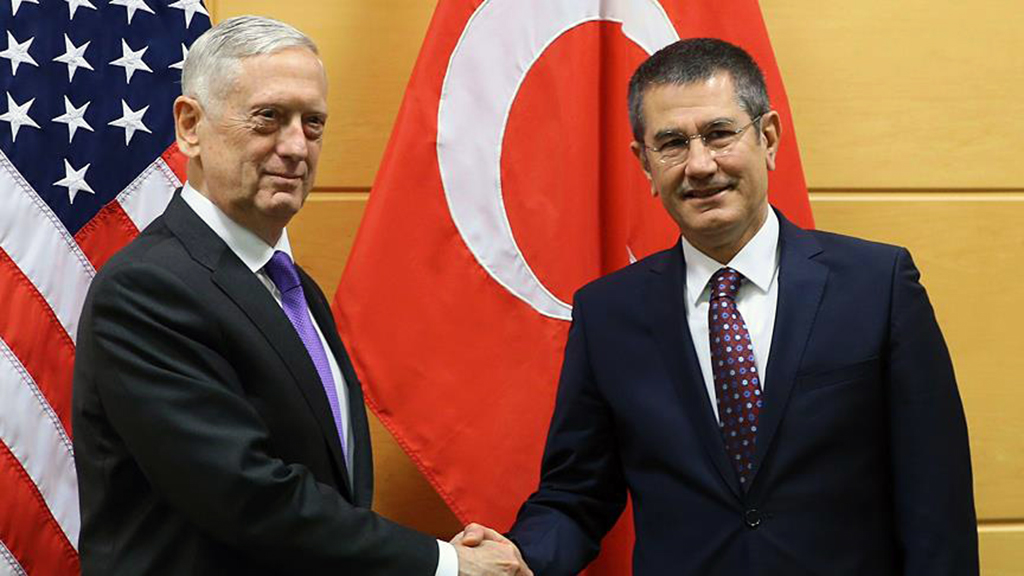 Last exit before the bridge

If Washington continues to test Ankara's patience by pushing for the creation of a ‘terror corridor' and state-like entity on its doorstep, then the make-or-break time for relations might be upon us

Observers of Turkish-U.S. relations have been experiencing one the most intense periods of diplomatic wrangling between Ankara and Washington in recent weeks aimed at preventing the ever-deepening political rift from turning into strategic divergence. Bilateral relations are at their lowest level in decades as President Recep Tayyip Erdoğan received U.S. Secretary of State Rex Tillerson at the Presidential Complex in Ankara for an unusually long three-and-a-half-hour meeting during which written and visual evidence of U.S. support for the People’s Protection Units (YPG) militant in Syria was presented. Pursuing a hasty strategy of crisis management, U.S. National Security Adviser Gen. H.R. McMaster was in Turkey last week to discuss pressing military issues on the ground, while Defense Minister Nurettin Canikli and U.S. Secretary of Defense James Mattis held closed-door talks in Brussels.

Despite the intense diplomatic contact, the acute problem of miscommunication seems to continue between the two key NATO allies or, put differently, Washington prefers to ignore Ankara’s national security concerns stemming from its extended support to the YPG. Although the U.S. and Turkey have entered Syria in the same international coalition and collaborated in the fight against Daesh, the U.S. has radically shifted its support since 2013 from the Free Syrian Army (FSA) to the YPG, an affiliate of the PKK, which for its part perpetrates terrorist attacks in Turkey. Although Ankara tried to utilize all existing diplomatic channels to voice its concerns, strategic steps taken by the U.S. in Syria aimed at creating a YPG corridor in the north continued to raise an existential threat to Turkey’s national security interests. Dramatically, the two NATO allies fell on opposing sides in a very complicated conflict zone, and the announcement that Washington intended to turn the YPG-led Syrian Democratic Forces (SDF) into a 30,000-strong border security force finally broke Turkey’s patience.

Having early come to the point that enough is enough, Turkey launched Operation Euphrates Shield and is currently conducting Operation Olive Branch in northern Syria to secure its border from terrorist infiltration and to prevent the formation of a YPG corridor. Both of these military operations have been directly against the strategic objectives of the U.S. in northern Syria, which were to a large extent determined by a desire to create a buffer zone via the YPG in order to control Iran. This obsession led to a process through which substantial American economic and military support provided to a terrorist organization was formalized and entered into the Pentagon’s 2019 budget at the sum of $550 million.

Washington’s stubborn refusal to reconsider its deeply flawed Syria policy based on the provision of political, economic, military and moral support to the YPG lies at the heart of escalating tensions. While the two countries have recently engaged in unusually detailed and serious negotiations to keep tensions from spiralling out of control, public statements such as Tillerson claiming that the U.S. has never provided heavy weaponry to the YPG, or Mattis claiming that they could use the YPG to fight against the PKK, do not carry even the minimum level of seriousness required from responsible statesmen. Ankara has pretty much lost all of its confidence in the U.S. as a strategic ally and has started to find new ways of dealing with Washington through a mixture of hard and soft power assets.

The latest escalation took place in the context of a confluence of critical global and geopolitical circumstances in which the U.S. administration disregarded its presumed responsibilities for the provision of stability as a global hegemonic power. While the image of the U.S. as the vanguard of human rights and democracy has swiftly eroded, its legitimacy in international and regional platforms has followed suit. Conventional American allies such as Turkey are now adapting to this new environment by forming alternative issue-based alliances with countervailing powers, establishing dynamic multilateral networks and following balancing strategies via smart power.

In a nutshell, if Washington continues to test Ankara’s patience by pushing for the creation of a “terror corridor” and state-like entity on its doorstep, then the make-or-break time for relations might be upon us. The historical depth of mutual, strategic relations and the resilience of the NATO alliance have so far prevented structural damage, but the U.S. administration is advised to take the last exit before the bridge and stop their support for terrorist groups at the expense of Turkey in order to maintain any realistic chance of normalization in the long term.

Is it still worth talking to the Americans?
Next
Loading...
Loading...
We use cookies to ensure that we give you the best experience on our website. If you continue to use this site we will assume that you are happy with it.Ok