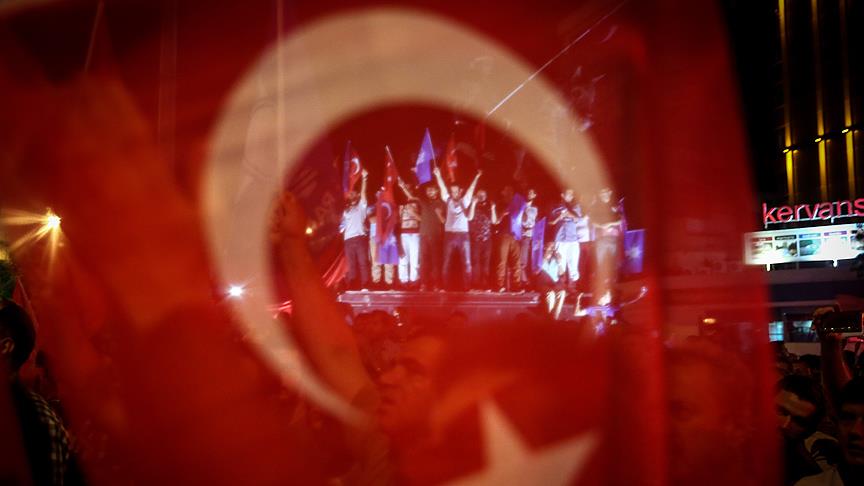 July 15: Anniversary of the resistance for democracy

On Sunday, Turkey will commemorate the resistance of the Turkish people to the July 15 coup attempt. On that fateful night hundreds of thousands of Turkish people went to the streets to protect their democracy and stop the putschists before they took over the democratically elected government of Turkey. The resistance has become an exemplary instance of non-violent struggle against military coups around the world. The sudden emergence of hundreds of “tank men” from different parts of Turkey and “democracy watch” nights for more than a month in all of the major cities of Turkey displayed the commitment of Turks to their rights and their democracy.

Since that heinous coup attempt, Turkey has gone through significant transformations. On the one hand, the Turkish government took measures to prevent another possible coup attempt by similar groups, and on the other hand investigations have been pursued to eradicate those who infiltrated state institutions to form a parallel structure within it. This critical period also witnessed significant structural reforms in the government mechanisms of Turkey. Domestically, in a referendum last April, the Turkish people decided to change the system of government, from a parliamentary system to a presidential one. One of the major reasons for people to support this amendment to the constitution was their willingness to prevent the emergence of another tutelage system in government. A very high turnout for this referendum demonstrated that Turkish people are actively participating in democratic electoral processes and will not let this right be intercepted by any other actor or group. Following that with presidential and parliamentary elections last month, the Turkish people once more went to the ballot boxes in record numbers. After a vibrant political campaign, the voters had their say and elected Recep Tayyip Erdoğan as president of the Republic in the new government system.

In the meantime, in these two years since the coup attempt, the government also had to deal with three significant national security threats to the country and the people. The coup attempt took place in a period when both the PKK and Daesh were organizing their most violent terrorist attacks in Turkey. Gülenist officers aimed to catch Turkey in its very vulnerable phase and overthrow the democratically elected government. The group was declared a national security threat for Turkey by the National Security Council. The state was taking measures to cleanse critical institutions of the impact of the Gülenist Terror Group (FETÖ). Thus, when the coup attempt happened and the officers that joined the coup attempt started to be rounded up, many assumed that this would create a significant vulnerability for the Turkish security forces. Some launched discussions about the capacity and capability problems of Turkish security forces. However, in the last two-year period, while trying to eliminate the criminal networks from its mechanisms, Turkish security forces organized the most extensive counterterrorism operations in Turkey and across the border in Syria. The number of terrorist attacks sharply declined in the last two years, and the Turkish military organized the most comprehensive cross border operations. In both Operation Euphrates Shield and Operation Olive Branch, against all odds and against some projections of failure, the Turkish military successfully cleansed border areas of terrorist organizations. Together with the Manbij road map agreement and the Qandil operations against the PKK, this period has become the most successful period of cross-border operations.

In this period, Turkish political history, despite the trauma of the coup attempt and the ensuing economic shock, the Turkish government and the people did not change their stand in regards to humanitarian crises in the Middle East, and the government was actively involved in every attempt to resolve conflicts around the world. Turkey continues to be the provider of the largest amount of humanitarian assistance in the world. In critical humanitarian crises – in Syria, Somalia and Rakine State – Turkey has become the most significant humanitarian nation. Neither the domestic shock of the coup attempt nor the rising anti-immigration far-right wave around the world has changed the attitude of Turkey in regards to responding to the plight of the oppressed and the weak.

In the two-year period since the coup attempt, Turkey not only recovered from the trauma and shock of the attacks to its most fundamental organizations and institutions but also grew stronger than before by building more extensive capacity in the fight against terrorism, by participating with a great majority in the electoral process, by eradicating the infiltrated elements of the putchists from its agencies and security forces and by continuing its aid, assistance and conflict resolution attempts in the region. Resistance to the coup attempt thus became another major turning point in Turkey’s political history and a critical threshold in its capacity to deal with illegal networks and groups. The hundreds who lost their lives and thousands who were wounded during this resistance have been those who created the building blocks of this new era.

Turkey's new Cabinet and the transformation of bureaucratic rule
Previous

The future of NATO after Brussels
Next
Loading...
Loading...
We use cookies to ensure that we give you the best experience on our website. If you continue to use this site we will assume that you are happy with it.Ok