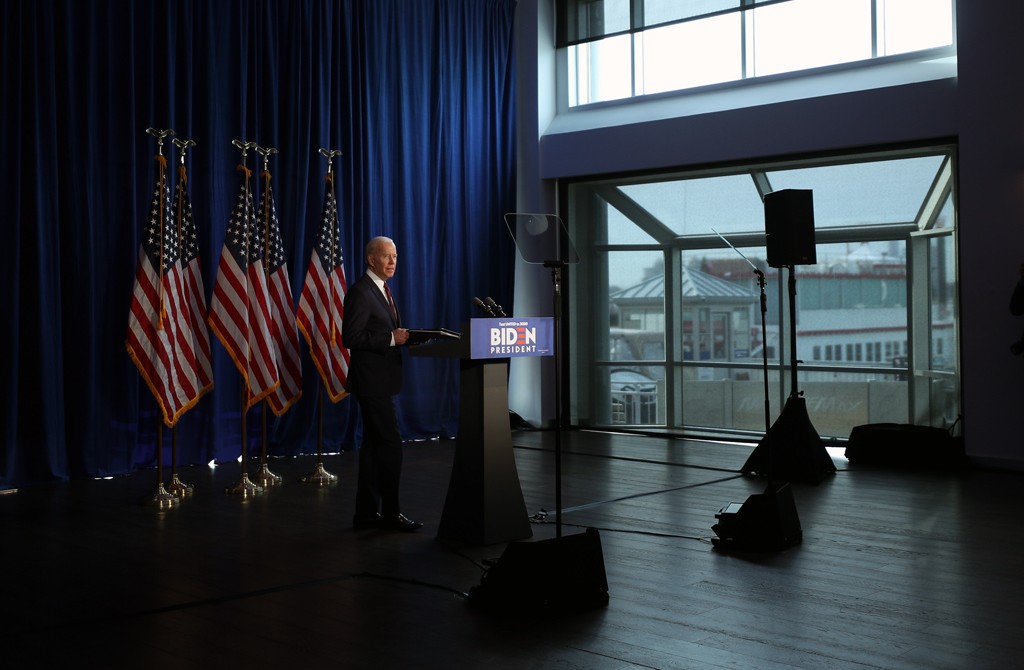 During a meeting with the editors of The New York Times seven months ago, former U.S. Vice President and current Democratic presidential candidate Joe Biden labeled President Recep Tayyip Erdoğan an “autocrat” and criticized Turkey for its constructive relations with Moscow and policies over northeastern Syria.

During a meeting with the editors of The New York Times seven months ago, former U.S. Vice President and current Democratic presidential candidate Joe Biden labeled President Recep Tayyip Erdoğan an “autocrat” and criticized Turkey for its constructive relations with Moscow and policies over northeastern Syria.

Biden promised to encourage and offer more overt support to the opposition in Turkey if he came to power against incumbent President Donald Trump in November’s presidential race.

Biden’s arrogant comments were disturbing. Still, his deliberate plans to intervene in Turkish politics and reshape the political scene in Turkey have whipped up outrage among the Turkish public.

Such undiplomatic views, however, are a significant blunder for a presidential candidate well-known for his long list of political blunders.

Washington’s string of liberal interventionism since the 1990s has left behind a terrible legacy and destabilized many countries. Biden, as such, signaled his support for broader interventionism and deeper involvement in the domestic politics of other countries if he succeeds in the presidential race.

Those statements may be considered as part of his public relations campaign, yet those views also outline his mindset as an experienced and old-fashioned politician. It would be tough to change the mindset of a politician nearing 80 years old.

Both pro-government political actors and the opposition in Turkey condemned Biden’s arrogant comments. There was already a profound skepticism in Turkey about the negative legacy of the Barack Obama presidency on Turkish-American relations. The failed coup attempt of the Gülenist Terror Group (FETÖ) on July 15, 2016, is often associated with Washington’s involvement during the Obama presidency. Biden was one of the actors orchestrating those interventions during his role as a senator and Obama’s vice president.

Biden is believed to be one of the leading actors behind Obama’s foreign policy and is thus responsible for the deterioration of Turkish-American relations. The second term of the Obama presidency in particular marks one of the lowest periods of Turkish-American ties for decades. Washington sponsored the PKK/YPG and continued to protect and support the members of FETÖ while trying to contain Turkey by supporting its regional competitors.

Biden is promising the media he will topple Erdoğan by supporting the opposition, but he also signals the intensification of support for terrorist organizations that target Turkey. According to public opinion polls, more than 80% of the Turkish population considers Washington Turkey’s enemy rather than its ally. This is mainly because of Washington’s destructive interventions to Turkey’s internal affairs and the sponsoring of Turkey’s international enemies. Thus, Biden’s comments have not been helpful to opposition parties in Turkey either.

What is more frightening is the overall attitude of Biden, which recalls the liberal interventionism that has dragged Washington to unwinnable wars in the Middle East and Afghanistan. Biden has been involved in Washington as an essential figure dealing with foreign policy files for more than 40 years. He experienced the legacy of the Cold War era, post-Cold War American liberal hegemony, and the post-9/11 quagmire. Liberal interventionism and liberal foreign policy did not last long and left behind a mess.

Many liberal analysts assumed that the world would be a much more peaceful place if the liberal democratic system prevailed as the ideological mainstream all over the world. Armed or unarmed interventions into domestic politics with various means to change regimes became fashionable among policymakers in Washington and some European circles.

While change has been achieved through elections or popular protest movements in some countries, the overall legacy of liberal interventions is quite bleak. Some authoritarian leaders, such as Iraq’s Saddam Hussein and Libya’s Moammar Gadhafi have been toppled with such methods. Sanctions have weakened some authoritarian regimes, yet these interventions did not help resolve any conflict and did not make the world a more peaceful, more stable place.

Liberal interventionism has left behind a catastrophic legacy in the region. Washington has used civil society, supported opposition media, trained and mobilized opposition movements and sponsored ethnic, religious and ideological separatists as some of its methods. All those interventions have been legitimized in the name of democratization efforts.

Autocratic regimes like the United Arab Emirates (UAE) and Saudi Arabia have also formed a league of authoritarians and invested more than the liberal actors have in their own agenda. Liberal interventionism stimulated this authoritarian counter-interventionism. The overall outcome of all those maneuvers is a much more destabilized region.

Washington may help stimulate constructive change in the global economy and sponsor or lead peace initiatives but taking sides in the domestic affairs of other countries and international conflicts will backfire. What Biden misjudges is that while Washington may still be a superpower, it is no longer the actor that can shape international politics unilaterally.

Washington’s interventions will trigger the counter-interventions of other actors like Russia and China and will backfire. Internationalism and investment in norms and institutions that promote peace and stability should be the priority of Washington, rather than another cycle of interventionism.

The UAE-Israel agreement and the Arab world
Next
Loading...
Loading...
We use cookies to ensure that we give you the best experience on our website. If you continue to use this site we will assume that you are happy with it.Ok