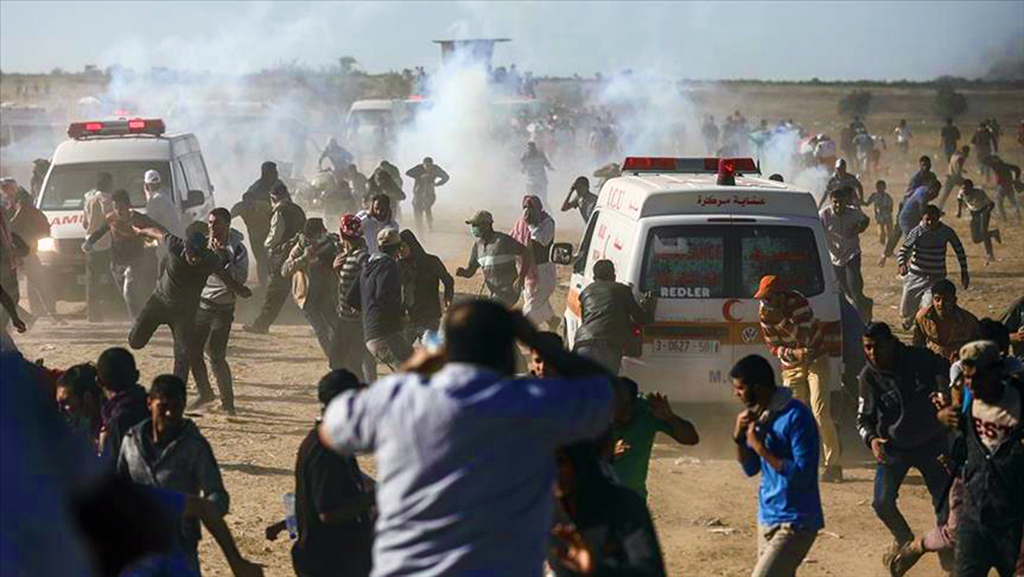 Is the idea of A two-state solution dead?

Netanyahu's greed and the brutality of Israeli security forces will only push Palestinians away from a diplomatic solution. It is the international community's responsibility to create a peaceful environment for a two-state solution

The Israeli assault on unarmed Palestinians during the protests against the opening of the U.S. Embassy in Jerusalem and the commemoration of the Palestinian Nakba (catastrophe) led to the deaths of scores of Palestinians, including children, and wounded hundreds more. This massacre once again demonstrated Israeli brutality against unarmed Palestinian protesters. For the time being, the Donald Trump administration’s unwavering support for Israeli Prime Minister Benjamin Netanyahu’s government makes Israeli officials feel safe but with the recent move, the Trump administration has also partnered with Israel’s brutality. Despite all the criticism, the Trump administration decided to open the U.S. Embassy in Jerusalem and lost its mediator status in the Palestinian-Israeli conflict. The possibility of a negotiated peace deal is becoming almost impossible with Israel’s unilateral moves that also violate international law and norms.

The Netanyahu administration and the Israeli extreme-right systematically undermine the possibility of a two-state solution for the Palestinian-Israeli conflict. A two-state solution according to the 1967 territories is considered the only viable solution compatible with international law and standards of sustainable peace. So far, this option was considered the standard for any solution that would fulfill the expectations of the Palestinians and provide security assurances for Israelis. Netanyahu and the Israeli right-wing’s plans for the long term are to make the West Bank a part of Jordan; to completely isolate Gaza; to move the Gazans somewhere else; and to extend the illegal Israeli settlements further. Criminalizing the entire population in Gaza and collective punishment is another pillar of their brutal plans. Israeli security forces are testing the limits of Hamas and expecting Hamas to retaliate with violent means. So far, Hamas has managed to stay away from armed confrontation with Israeli forces or attacking Israeli civilians, but Israel’s brutal strategy puts great pressure on Hamas’ leadership.

The status of Jerusalem, which constituted the most significant sticking point in the Oslo Peace Talks of the 1990s, is expected to be unilaterally controlled by Israel, according to Netanyahu and Israel’s right-wing. Controlling all of Jerusalem and possibly destroying the religious sites and monuments of other religions with the pretext of archaeological work are probably essential parts of their one-sided plan. Palestinian hopes for a just peace are diminishing under such a systematic attack.

The Trump administration’s policies and relations with the Israeli government facilitate the claims of the Israeli right, undermining the possibility of a just peace in the Palestinian-Israeli conflict. The current administration, unlike former American governments, supports the complete destruction of the Palestinian cause. Netanyahu wants to keep the Jerusalem issue off the negotiation table in future peace deals. However, such a move, including the full-scale isolation of Palestinians, will not leave any incentive for Palestinians to make peace. Such peace would mean the complete denial of Palestinian identity and the Palestinian cause, which is not just limited to the region.

It seems that the bloodbaths and massacres perpetrated by Israel security forces will continue; and with every move, Netanyahu will try to push the bar higher, testing the international community’s responses. The United Nations, the Arab League and the Organisation of Islamic Cooperation (OIC) are unlikely to deliver change due to Washington’s pressure and fragmentation within the institutions. Both Netanyahu and Trump’s policies concerning the Middle East as a whole contradict with the medium and long-term regional interests of their countries. However, with such solidarity, both leaders push forward some of the criticisms and allegations they face in their domestic politics. The personal agendas and preferences of the two leaders contradict the broader interests of their countries. Every move of the Trump administration, especially concerning the Middle East, tortures international conventions, norms and institutions. Similarly, the Netanyahu government’s brutality violates every humanitarian value and humane standard. Israel’s recent moves, which are also approved and supported by the Trump administration, leave no hope of peace for the coming generation of Palestinians.

If this brutality continues, there may be a new generation of Palestinians who will further distance themselves from political settlements or diplomatic deals with their Israeli counterparts. It is the responsibility of the international community, institutions and regional actors to bring back the idea of a negotiated diplomatic solution for the Palestinian-Israeli problem. International actors also have a responsibility to keep the hopes of peace alive, but so far no one has tried to take diplomatic initiatives other than Turkey and few other actors.

Don't cry for Al-Quds, take a stand for justice
Next
Loading...
Loading...
We use cookies to ensure that we give you the best experience on our website. If you continue to use this site we will assume that you are happy with it.Ok