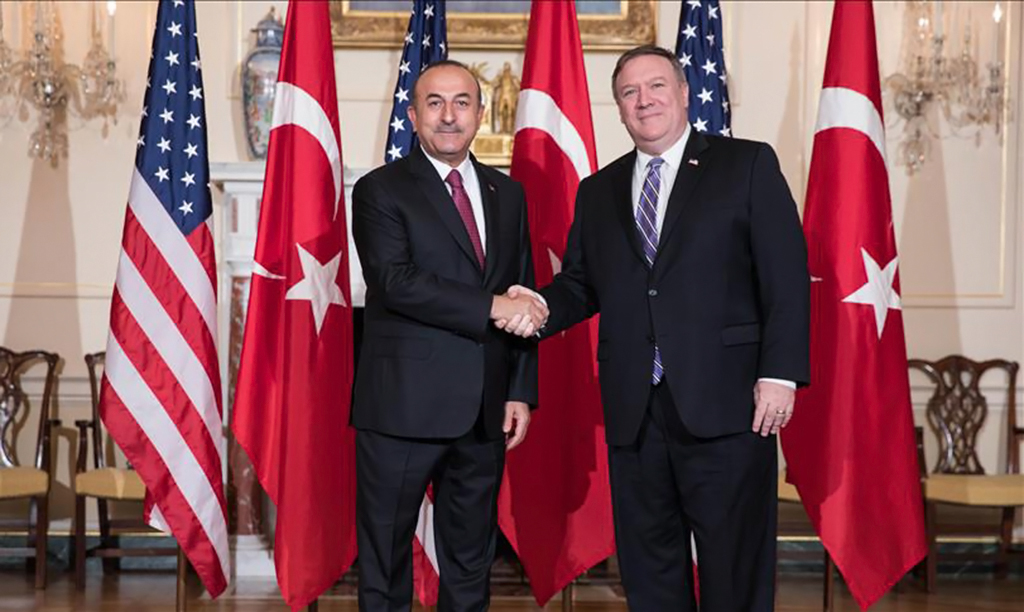 Turkish Foreign Minister Mevlut Cavusoglu (L) shakes hands with his US counterpart Mike Pompeo (R) ahead of their meeting in Washington, United States on June 4, 2018.

Is it the end of Turkey-US partnership?

There have been a lot of questions about the future of the Turkish-American partnership for the last few weeks.

There have been a lot of questions about the future of the Turkish-American partnership for the last few weeks. There are pessimists who contend that relations will never recover from the turbulence that it entered, and this historic partnership will fall apart. There are also optimists, now fewer in number and more cautious than they used to be, who see the current state of relations as just another phase of Turkish-American relations that has been sometimes unstable but overall rather steady. For pessimists, the latest phase of the crisis between the two countries that erupted as a result of the trial of pastor Andrew Brunson is only a symptom of deteriorating relations. For cautious optimists, the reason for this crisis is due to the misunderstandings and miscommunication that took place between the leaders of the two countries.

It is important to understand that the partnership between the two countries reached a certain point after the end of the Cold War. In the 1990s, the partnership had a chance to be revived and reset by the two countries. However, the U.S. administration preferred to follow a policy of establishing ad hoc partnerships during this period, and the NATO allies failed to reform and renew the nature of the alliance. Turkey and the U.S. also made ad-hoc alliances in the Gulf War and during the humanitarian intervention in Somalia. These partnerships became the rule of the game. However, as we entered into the 2000s, the two countries started to have disagreements in regards to crisis areas. The divergence of interests and concerns reached a high point with the Iraq War, and since then in most of the Middle East crises, the two countries failed to reach a policy convergence. This has led some observers to offer the concept of transactional relations to define the new state of Turkish-U.S. relations.

In this new conceptual framework those observers were expecting that the two countries could work in some areas of convergence and try not to bring relations to the brink in case of a divergence of interest. However, in the last decade we have seen that this is a rather difficult equation to keep. First of all, areas with divergences of interest have become too big to handle.

Furthermore, the U.S. side elevated the level of crisis to a major breakdown. Especially in the last few years, there was a constant threat to Turkey to adopt sanctions for different things, from S-400 missile system to the Brunson case. There was an obvious asymmetry in terms of the reactions of the two countries to the different crises. Second, there has been a major problem of trust. U.S. assistance to the PKK-linked People’s Protection Units (YPG), the arrest of Turkish banker Hakan Atilla and the way that his trial was conducted, the presence of Fetullah Gülen, the leader of the Gülenist Terror Group (FETÖ), in the U.S. and all the other public diplomacy accidents conducted by different institutions of the U.S. against Turkey all contributed to this crisis of trust and confidence. It was not just Turkey, but most of the U.S. allies suffered from the same problem in their relations with the U.S. On these shaky grounds, it has been very hard to establish a transactional partnership either.

In this critical juncture of bilateral relations it is important to realize that the relations need a new conceptual framework. This would necessitate a step-by-step approach that will start with the use of effective diplomatic mechanisms to find least common denominators in the crisis areas. The working groups established following former Secretary of State Rex Tillerson’s visit can be a first step for this. It is true that the two countries can work together in some critical issue areas. From Afghanistan to the Balkans, from energy security to the war on terror, the two countries share important goals and objectives; however, recent crises demonstrate that these common goals fail to generate a strategic partnership. What needs to be done in the coming period is for the two countries to start a strategic dialogue that will entail the key areas of geopolitical significance. It will be critical to give some meaning and content for the partnership. They have to establish a working relationship to stop the crisis from spreading to different areas. Containment and control of the crisis is the first step to be taken care of. Both negotiators and diplomats need to be innovative and creative to handle the crisis and end this. In particular, the U.S., which adopted unacceptable measures against Turkey during this crisis, needs to understand that public opinion is a very important part of decision-making mechanisms. The reaction to the U.S. from Turkey should not be underestimated. Unlike other countries, foreign policy is a very significant part of public opinion, and it will continue to be so.

Turkey-US alliance should not be 'black and white'
Next
Loading...
Loading...
We use cookies to ensure that we give you the best experience on our website. If you continue to use this site we will assume that you are happy with it.Ok