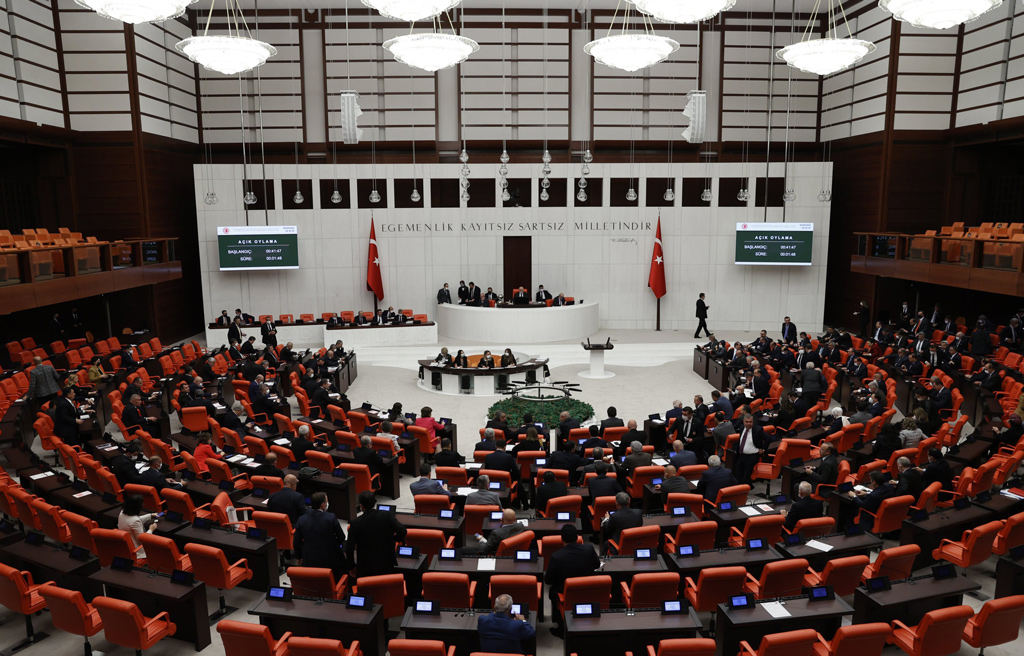 Lawmakers in a session at Parliament, in the capital Ankara, Turkey, April 8, 2022. (AA Photo)

It sounds funny, but it's true. The Turkish opposition pinned their hope on the recently held elections in Hungary and was disappointed with the result

I think that the current debate does more harm than good to the opposition. Still, the opposition cannot stay away from that discussion. Those members of the opposition, who believe that economic hardship will guarantee their win, fuel the competition for the candidacy. Others, worried that President Recep Tayyip Erdoğan could pull another rabbit from his hat and win again, urge the opposition to focus on the transition period and a common platform. Indeed, they dislike the fact that the international atmosphere that the Russia-Ukraine war ushered in, highlights the need for “strong leadership.”

When Hungary’s Prime Minister Viktor Orban won the election with 53.1% votes as the fourth landslide win, the Turkish opposition considered it an unpleasant development. After all, had the Hungarian prime minister lost, they would have been able to raise their spirits by talking about “the collapse of authoritarianism and populism” and drawing parallels with Turkey.

Instead, for the time being, they downplay the importance of Hungary’s election by saying that Turkey is quite different from it. CHP Chairperson Kemal Kılıçdaroğlu made that case at length. Yet, some more cautious pro-opposition commentators focused on the lessons to be learned from the Hungarian election while acknowledging the difference between the two countries.

Hungary’s six opposition parties picked a joint presidential candidate following a primary election, yet that plan failed to generate sufficient synergy, vision or a viable alternative. Again, the Hungarian opposition’s inability to deny Orban another victory with a pro-European Union platform says a lot about the impact of outside support on election results. However, one could not dismiss the whole thing as yet another victory by the populists either.

It would not surprise me if the debate over “finding an electable candidate” gathers steam with references to the Hungarian election at the expense of Kılıçdaroğlu’s potential presidential bid. In this regard, I do not view Istanbul Mayor Ekrem Imamoğlu’s remarks – “Kılıçdaroğlu is the party’s candidate and mine” – as forfeiture. Instead, one could call it repositioning, a frequently used phrase nowadays. I expect Imamoğlu to keep trying to run in 2023 as the opposition’s joint candidate by resorting to more indirect statements and tactics. In this sense, I disagree that he is prepared to wait until 2028 to pursue his dream of the presidency. (There are many others that consider running in that election and a lot can change in six years.)

The outcome of Hungary’s election laid bare the contradiction between the Turkish opposition’s proposed system and a candidate. Gathered around a roundtable, the six opposition leaders are compelled to develop two proposals for the system of government and find a suitable presidential candidate. They must come up with an alternative presidential system in addition to the “augmented” parliamentary system – which did not attract sufficient attention. In the end, the electorate expects clarity and stability instead of uncertainty.

What everyone wonders, however, is the opposition’s idea of an alternative presidential system. If they propose that the six opposition leaders assume Cabinet posts as vice president(s) and ministers, that plan begs the following question: What kind of joint presidential candidate do they need? If elected, will that candidate serve as a kind of coordinator (in line with the parliamentary system), or should they be a prominent leader with the potential to challenge Erdoğan?

I must say that the opposition’s pledge not to elect “another Erdoğan” seems quite naive. In reality, they must find a candidate that will contest the election like a president that will lead and later go on to become a symbolic head of state who can juggle the never-ending demands of six opposition leaders. For the record, it is unlikely for the opposition to address that dilemma by picking Kılıçdaroğlu, Imamoğlu or Ankara Mayor Mansur Yavaş.

If I had to say which was more difficult – being a “coordinator-president” or a president that leads – I would pick the former. That is indeed the textbook definition of being stuck between a rock and a hard place.

The course of the Russia-Ukraine war is changing
Previous

New energy in Turkey-US ties
Next
Loading...
Loading...
We use cookies to ensure that we give you the best experience on our website. If you continue to use this site we will assume that you are happy with it.Ok