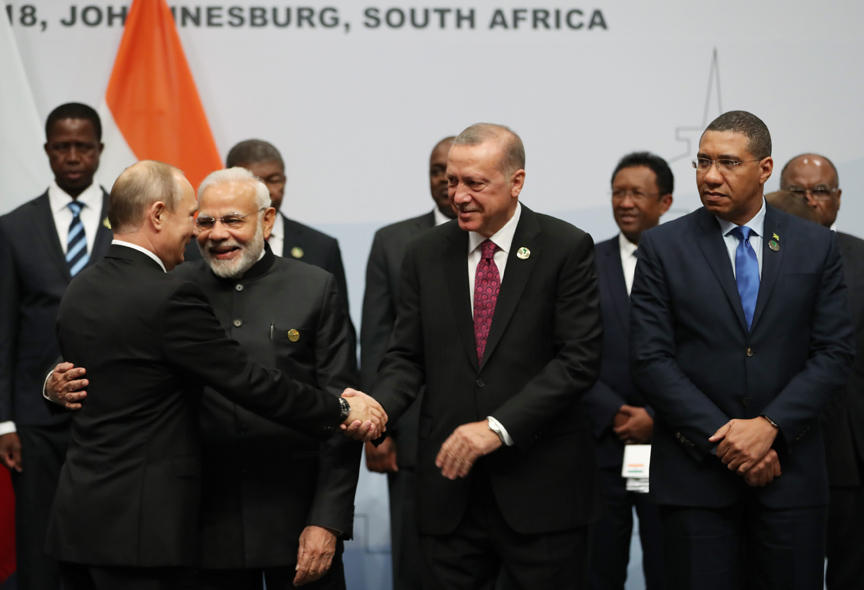 BRICS Summit and consensus-building efforts in a fragmented world

The 10th Summit of the BRICS countries began in Johannesburg, South Africa on July 25. The group includes five emerging economies: Brazil, Russia, India, China and South Africa. The BRICS countries comprise 40 percent of the world’s population. They accounted for around 50 percent of global economic growth in the last decade and used to be the fastest growing economies among the developing countries. Though Russian, Brazilian and South African economies have faced some severe challenges in the last couple of years, they still have the potential for accelerated growth in the coming years if they deal with their domestic issues and the new obstacles created by the Trump administration.

The theme of this year’s summit is “BRICS in Africa: collaboration for inclusive growth and shared prosperity in the 4th Industrial Revolution.” Africa will be at the forefront of the BRICS’s agenda of economic cooperation and growth.

This year President Recep Tayyip Erdoğan has also been invited to the BRICS summit, as the chair of the Organisation of Islamic Cooperation (OIC). He will be accompanied by Treasury and Finance Minister Berat Albayrak.

From there, Erdoğan will continue his Africa trip with an official visit to Zambia. It will be the first official visit of a Turkish president to Zambia. African emphasis on the BRICS focus is especially important because of the current trend of trade wars in the developed world. New markets and new zones of cooperation and collaboration are crucial for keeping the dynamism of the global economy.

The main agenda item for the BRICS summit will be the Trump administration’s initiation of global trade wars and a rise of protectionist policies. BRICS countries discussed their alternative strategies to deal with the problem of protectionism. China, India and other developing countries are likely to be affected by the trade wars very negatively. They have to revise their plans for economic growth and recalibrate their model of industrial development under the new conditions. They need to either find new markets for their manufactured goods and commodities, which seems to be a very difficult task under the emerging protectionist global trade regime or to strengthen their domestic markets and boost consumption.

Trump policies target multilateralism of any kind and the potential for global governance and collective action and responses to economic crises. This may lead the efforts to improve ties and cooperation among the countries of the global South. The south-south collaboration which used to be an abstract ideal or a popular slogan may turn into a solid reality that may revamp the problems in emerging economies. The agenda of incorporation of Africa to the “South-South cooperation” is also a significant effort which may further alienate and distance of the prosperous economies of the global North from the rest of world. Such a trend will not be beneficial for the North American and European economies as well.Formation of an independent economic and credit rating agency is also another critical agenda item within the BRICS discussions. The American Federal Reserve (Fed)’s monetary policies affected the BRICS economies very negatively in the last couple of years. Reducing dependency on Fed policies and sealing the influence of credit rating agencies is a common concern for the BRICS economies. The emergence of new and credible credit and financial rating agency is a shared interest of all the BRICS members as well as countries like Turkey that complain about manipulations and unfair assessment of the credit rating agencies.

Multilateral platforms like the G7, G20, and BRICS, are beneficial for formulating a shared understanding of global economic challenges and finding collaborative response mechanisms. In the last several months those mechanisms have been weakened because of the declined role and leadership of the U.S. under the Trump administration. Platforms like BRICS may play more critical roles under this new reality. Turkey’s involvement in such platforms and consultation mechanisms is also crucial for the future.

BRICS need objective credit rating agency: Expert
Next
Loading...
Loading...
We use cookies to ensure that we give you the best experience on our website. If you continue to use this site we will assume that you are happy with it.Ok