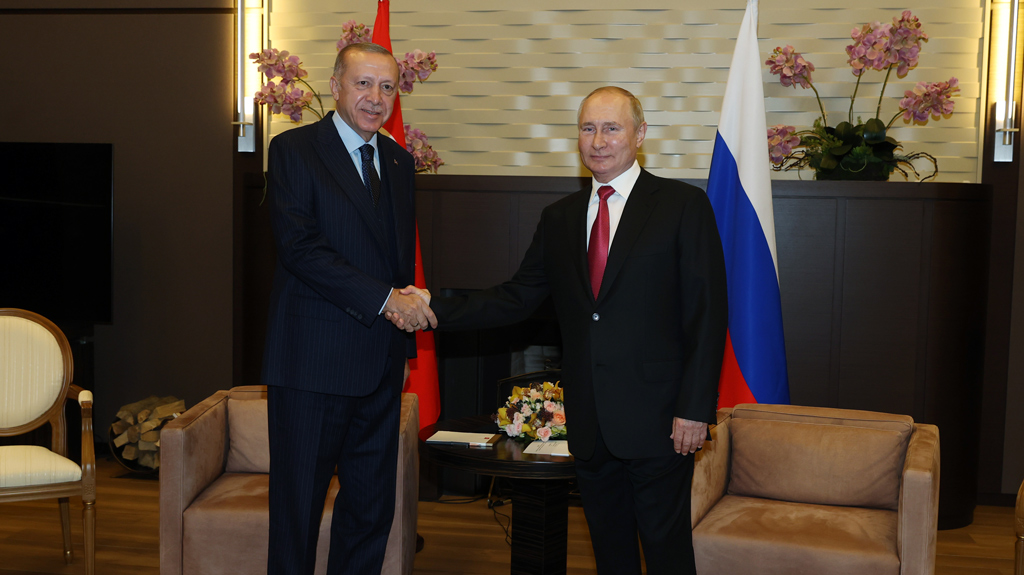 Turkish President Recep Tayyip Erdogan (L) and Russian President Vladimir Putin (R) pose for a photo prior to their meeting at the Russian Official Residence of Presidency in Sochi, Russia on September 29, 2021. ( Mustafa Kamacı - Anadolu Agency )

After escalation in Idlib, what’s next for Turkey-Russia relations?

The Turkish-Russian ceasefire in Syria has run its course, setting the stage for confrontation between Ankara and Moscow if a new buffer to smoothen tensions isn’t achieved.

Once again, Syria’s Idlib seems to be on the verge of a new war.

In spite of the ceasefire Moscow and Ankara signed in March 2020, Russia again pounded opposition-held Idlib with massive airstrikes on September 26. Additionally, Russia bombarded the Syrian National Army in Afrin, a region that was cleared from the YPG – the Syrian branch of the PKK terror group – by a joint military operation of the Turkish Armed Forces and Syrian National Army during Operation Olive Branch in 2018.

The increasingly hostile rhetoric from Moscow, the growing intensity of airstrikes, troop deployments, as well as political developments in Syria may indicate that war in Idlib might be on the horizon.

In 2020, an airstrike by the Assad regime killed 33 Turkish soldiers in Syria who tried to protect the 3.1 million civilians in the region and prevent another refugee flow towards Turkey. After the incident, Turkey launched Operation Spring Shield, devastated regime units, and forced Russia to sign a ceasefire it was previously unwilling to accept.

Since then, the Turkish army has increased its military presence in Idlib and the region seemed to enjoy a relative calm and security.

However, several dynamics made the ceasefire fragile and new developments have provided Russia with new momentum to flex its muscles in Idlib.

When the ceasefire was signed, it was grounded upon a power balance in Idlib. However, three problems remained and no significant progress was made to resolve them.

Therefore, Russia’s ultimate goal in Syria is to push Turkey out of the country and to eliminate the legitimate Syrian opposition. As long as Russia does not change its position that a political process in Syria is the better or only option, each and all ceasefires will remain fragile.

Secondly, the presence of Hayat Tahrir al Sham (HTS) in Idlib will always provide Russia with a pretext to attack the region. The attacks against the Syrian National Army in Afrin underline again that HTS is not Russia’s real motive. Nevertheless, the pretext to fight HTS provides Russia with a legal position and strengthens its hand in diplomatic negotiations.

On the other side, the presence of HTS in Idlib limits Turkey’s activities and weakens the Turkish position to protect the city’s three million civilians. Like Russia, Turkey considers HTS to be a terrorist entity. Despite some progress and evolution, HTS has still refused to disband.

Until then, Russia will continue to argue that its position is backed by the Astana accords and UN resolutions against Al Qaeda. Even so, this does not legitimise the cruelty in the Russian strategy to wipe out the legitimate Syrian opposition, killing hundreds of civilians and starting a massive migration wave.

Thirdly, even though Turkey fulfilled its part of the March agreement, conducting joint patrols on the M4 highway and establishing a security corridor, Russia has withdrawn from the patrols due to fear of attacks from underground Al Qaeda elements. Turkey continues to conduct these patrols.

On the other side, Russia has not fulfilled its obligations regarding the YPG. According to the Turkish-Russian agreement in October 2019, Russia is obligated to enforce a full withdrawal of the YPG from Tal Rifaat, Manbij, and a 30 km strip east of the Euphrates River.

Even though Russia could not deliver on its promise and even supplied the YPG with weapons and military protection, Turkey could not establish a moral high ground. The American support and protection of the YPG has shielded Russia from Turkish criticism.

Confrontation or a new buffer in Turkish-Russian relations

While a fragile ceasefire remained, the timing of the recent escalation is important as well.

Since 2020, Turkey has successfully waded into multiple proxy conflicts against Russia. From Azerbaijan to Libya to Ukraine and Poland, Ankara has stepped up its game against Moscow and achieved several strategic victories.

Moreover, Turkey had begun to export its model to limit Russia without the help of the US. Moscow was seemingly frustrated and signaled it with sanctions against Turkey. However, it did not work, and Russia seems to have resorted to confrontation.

For Russia, Idlib is a preferred arena to express discontent with Turkish foreign policy; where it can use a position of strength to camouflage weakness. Moscow knows that public sentiment against refugees in Turkey has massively increased, and by escalating the situation in Idlib, it could create a new humanitarian disaster to force millions of Syrians towards Turkey.

Moreover, by attacking Afrin, Russia is trying to exploit American disinterest in Syria and the diplomatic low in US-Turkish relations. Russia perceives Turkey as being alone, and that it has the military might to force Ankara out of Syria. By signaling that, Moscow wants Turkey to end its alliance formations and foreign policy to limit Russia.

As I wrote before, the export of this model would ultimately end in confrontation by Russia or Turkish incentives towards Russia in the form of new projects to buffer their relationship to avoid escalation.

To this point, Sunday’s remarks by the Turkish president showing interest to buy a new batch of S-400 air defense systems could be such an incentive to prevent confrontation. Either by the procurement of S-400s or some other deal, both nations might be able to give their relations a new buffer it desperately needs.

Russia seemingly prefers confrontation limited in temporality and locality, though this position appears to be based on a fundamental miscalculation.

In contrast to 2020, (a) the armed Syrian opposition has regrouped and re-organised itself, (b) Turkey does not build new bases nor sends in new armory as it did last year, but has them already stationed and prepared for any confrontation in Idlib, (c) Turkish produced defence equipment such as drones and air defense systems, (d) Turkish fighter jets may play a required role if necessary, and (e) Ankara has more allies and theatres of conflict to act against Moscow’s interests.

Despite this, Turkey prefers a new arrangement over confrontation as it knows that a military escalation in Idlib might endanger the lives of millions of civilians, with the chance Russia might target Internally Displaced Peoples (IDP) camps with ballistic missiles as it did before.

The outcome over the future of Idlib and Turkish-Russian relations will be decided in the upcoming summit between Erdogan and Putin. Until then, all military escalations should be seen as posturing.

UN as a thought platform on the international system
Previous

Solving or just discussing? Turkey's 'Kurdish question'
Next
Loading...
Loading...
We use cookies to ensure that we give you the best experience on our website. If you continue to use this site we will assume that you are happy with it.Ok