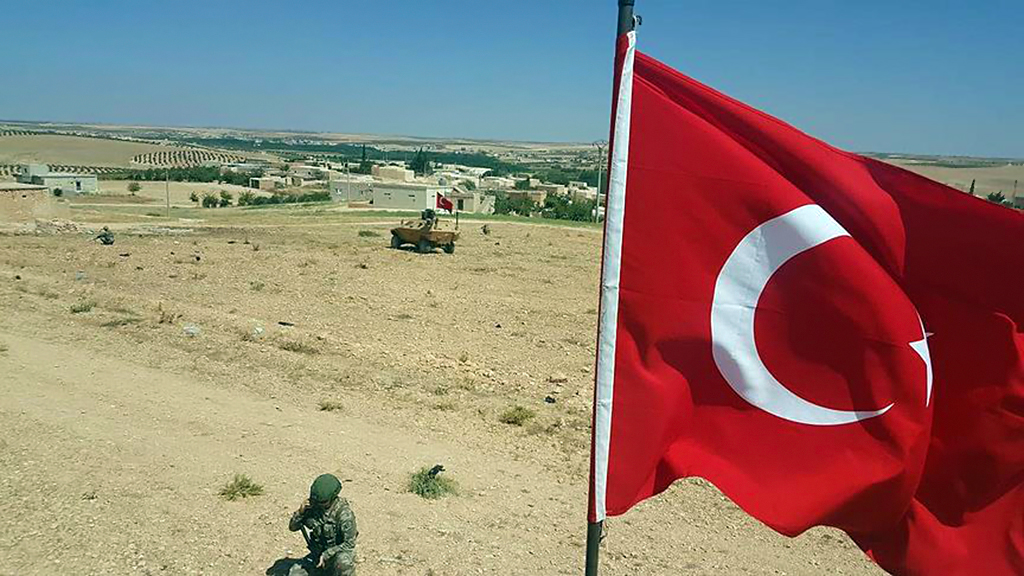 Last week, a controversial news story on northern Syria was leaked to the media, reporting that the People’s Protection Units (YPG) handed over the conflict-zone of Manbij to the regime and that regime forces had raised a flag in the Syrian city. It naturally urged both the Turkish army and the Free Syrian Army (FSA) to think about taking measures, but, in a short period of time, it was revealed that the report was fake. Then, Turkish and U.S. officials made sure that Manbij wasn’t in fact seized by regime troops and the photos circulating on social media were not true.

U.S. President Donald Trump’s sudden decision to pull U.S. troops out of northern Syria has already become a milestone in the region. Since Trump announced the withdrawal without making an international agreement or determining a road map, Ankara, although it welcomed the decision, is now concerned about a possible regime incursion in the locations that the U.S. will leave.

Firstly, the U.S.’ departure may fuel the tension and clashes near the Turkish border and will therefore put Turkey’s security at risk. Second, it may pave the way for Tehran to strengthen its hand by increasing its power in the region with the help of its proxies.

Indeed, the United States will not withdraw all of its almost 2,000 soldiers from Syria as it reportedly seems to be deploying some of them to the Iraqi border. Trump, in an interview with Fox News last week, also announced that he could intervene in Syria from Iraq, if need be. Unexpectedly, Trump, accompanied by his wife, paid a surprise visit to the American base in Iraq without any high-level diplomatic meetings scheduled, aiming to make an appearance in the Middle East and give the message that the U.S. is still there to stay.

The withdrawal decision may mean that the U.S. accepts the Turkish-Russian cooperation in Syria since its allies, Saudi Arabia and Iran, are already disturbed by the Iranian influence in the region; or Trump’s decision might cause the U.S. to lose control in the eastern Mediterranean, meaning the U.S. is about to change its year-long policy.

When taking into consideration the U.S.’ exit strategies both in Afghanistan and Iraq, it is sure that the U.S. withdrawal will not cost too much nor last too long. As usual, Trump doesn’t want to lose time or money anymore either in Iraq, Syria or Afghanistan. However, the complicated developments in Syria seem to prevent the U.S. from leaving the region as fast as the U.S. president wants.

For one year, Turkey increased its efforts and diplomatic initiatives in Syrian negotiations, and it seems the country has been very successful so far. For example, despite Ankara’s harsh reactions and warnings, Moscow had insisted on seeing the Democratic Union Party (PYD), a bloody group affiliated with PKK terrorists, as a legal partner in the Syrian peace talks. However, at this point, Russia is now maintaining close cooperation with Turkey in order to create a mutual road map rather than working with the PYD or YPG. By doing so, Moscow is playing a big role in saving the future of the area east of the Euphrates, which has been a hot spot for a while.

The PYD-regime rapprochement can be handled in a similar way. The close relation between the two parties was observed in Afrin and Idlib as well. Like today’s fake news about Manbij, some similar reports were also released in the media, saying that PYD/YPG fighters would hand over Afrin to regime troops. However, this never happened either.

The diplomatic affair between Russia and Turkey in Idlib harbingers that the two key states will pursue their close contact in the region. Therefore, it is more than normal to say that it is impossible for regime forces to occupy Manbij or the east of the Euphrates without Ankara knowing.

In the context of the developments that have so far taken place in Syria, it is safe to say that the PYD and the regime cannot jointly make a decision against Turkish interests. In addition, the main pillar of the intimacy between Syria and Russia is to secure the territorial integrity of Syria. Turkey, meanwhile, also wants to see a stable Syria with a political transformation, but under one condition: clearing the country and region from all kinds of terrorist elements, including the YPG and Daesh.In a nutshell, the U.S.’ withdrawal will not be the end of the rooted problems in Syria; on the contrary, the country is likely to be open to new balances and equations.

Even if the United States leaves Syria, there are other regional actors other than Russia and Iran, such as the anti-Daesh coalition and France. Furthermore, the latter disapprove Turkey’s counterterror offensives in Syria.

In the first week of the new year, John Bolton, Trump’s national security adviser, is scheduled to visit Ankara, and Deputy Foreign Minister Sedat Önal is scheduled to hold a meeting with U.S. officials on Jan. 8. In those two upcoming meetings, the Syrian crisis will be the top priority, and it won’t be a surprise if a new road map is announced for Syria. This means that the Turkey’s impending cross-border operations have been postponed, although the army did deploy some troops on the Turkish-Syrian border.

Manbij is located 40-kilometers from Turkey’s southern region on the border with Syria and has a strategically important location. Since a safe Manbij means a safe Syria, it has become the target of fake news.

The U.S.’ departure may trigger more fake news and even cause Turkey, due to the regime and opposition, to confront its two Sochi peace talk partners, Iran and Russia. As long as the U.S. pulls out of the region, the control of the Syrian city will be the topic of bargain. That’s why the YPG and the regime are already discussing the Syrian provinces of Ayn Isa, Manbij and Hasakah.

There is no doubt that Russia is the strongest state that can curb the Assad regime. Besides this, although Turkey and Moscow still differ in opinion about the definition of terrorist groups, the two parties pay attention to the Astana peace process. Russia can be another solution if it intervenes in Manbij like it did in Idlib.

Moreover, the Kremlin needs to be prepared for and take measures against a possible incitement by the regime due to the U.S.’ withdrawal. In this context, provocations, such as the fake news on Manbij, should be taken with a grain of salt. Meanwhile, it is worth noting that Ankara’s thesis that the YPG will hide behind the regime has already proved itself right.

A possible scenario: If regime forces take control of Manbij, Russia can guarantee that the YPG elements will not be there. Plus, in such a conjecture, if the safety of the opposition is provided and another refugee influx is prohibited, this is what Turkey also wants. Russia also needs to learn why Turkey plans to form a 10 to 40-kilometer buffer zone west of the Euphrates. In short, the fate of Manbij is not only dependent on the situation east of the Euphrates but also what happens in the west of it.

Perspective: The Future of the Balkans Will Depend on Itself
Previous

The US exit strategy from Iraq to Syria
Next
Loading...
Loading...
We use cookies to ensure that we give you the best experience on our website. If you continue to use this site we will assume that you are happy with it.Ok