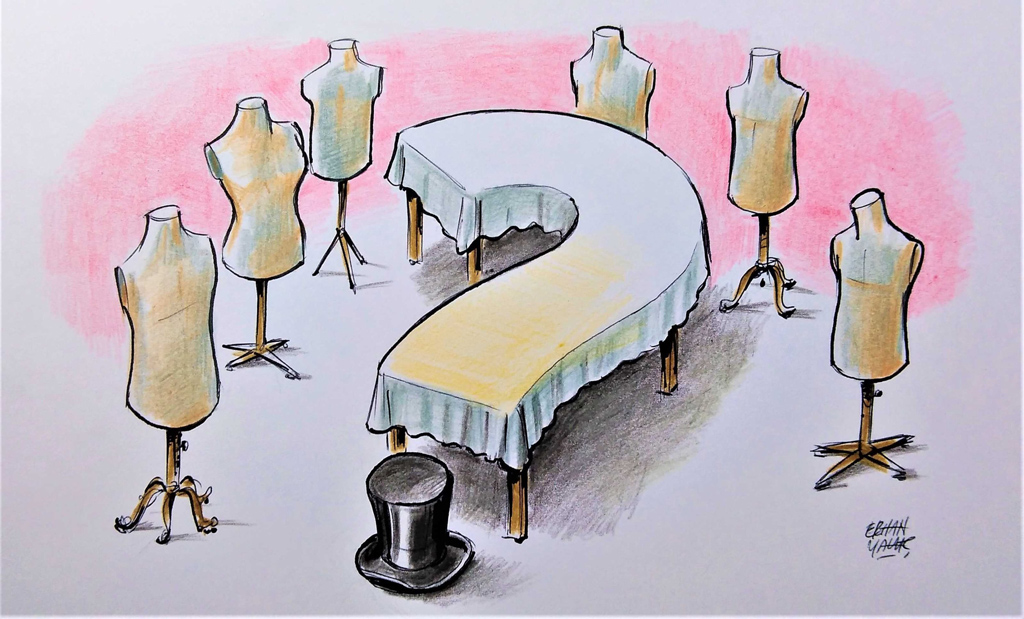 The group of six opposition parties, known as the “table for six”. | Illustration by Erhan Yalvaç.

4 discrepancies in ‘table for six’ in Türkiye

Needless to say, the election is just 11 months away and the People’s Alliance does a better job at highlighting the various contradictions of the “table for six.” Following in Erdoğan’s footsteps, the Nationalist Movement Party (MHP) Chairperson Devlet Bahçeli has been criticizing the profile of the opposition’s potential candidate.

Citing the special election in Dodurga, a district in the province of Çorum, the Good Party’s (IP) Chairperson Meral Akşener urged President Recep Tayyip Erdoğan to hold an early election. The group of six opposition parties, known as the “table for six,” made that same call in a written statement released after their fifth meeting.

For the record, the opposition has been constantly calling for an early election for three years and that rhetoric has no meaning and zero impact. As a matter of fact, it has become a defensive and tedious message since the pro-government People’s Alliance identified their presidential candidate and dared the opposition to do the same.

Needless to say, the election is just 11 months away and the People’s Alliance does a better job at highlighting the various contradictions of the “table for six.” Following in Erdoğan’s footsteps, the Nationalist Movement Party (MHP) Chairperson Devlet Bahçeli has been criticizing the profile of the opposition’s potential candidate.

In his most recent statement, Bahçeli described the opposition bloc’s ideal candidate as a “passive and ineffective puppet eager to hand over their seat as needed and willing to be commanded with a remote control.” He argued that the Turkish people would not settle for a presidential candidate that requires permission and has a lien on their name.

Obviously, the question of its ideal candidate’s profile is but one of the opposition bloc’s many contradictions. Those contradictions attract more attention as the glue that holds together the “table for six” – anti-Erdoğanism and the push for an “augmented” parliamentary system – proves unable to inspire hope in the electorate.

Here are the four main reasons why the Turkish people do not believe that the opposition could properly govern the country:

First, the opposition’s system of choice: The opposition leaders understand that restoring the parliamentary system will be a tall order even if the opposition were to win next year’s presidential election. Holding a constitutional referendum and another general election after the 2023 elections, too, would entail plenty of uncertainty. That is why they are holding talks on a coalition that would last five years. In other words, their plan is to establish a de facto government under the presidential system that would actually be based on the parliamentary system. That hybrid structure would not only cause plenty of problems vis-à-vis its constitutional mandate and responsibilities but also violate the very nature of political power. In this regard, it would have made more sense for the opposition to simply propose a different kind of presidential system.

Secondly, the opposition candidate’s profile: Establishing what kind of person should serve as president under the current system of government is a serious challenge for the opposition. This appears to have two different objectives: Their ideal candidate is supposed to pledge before the election that they agree to serve a symbolic role, do as the opposition leaders say, and even transfer their powers to the opposition leaders. At the same time, they are expected to defeat Erdoğan by outperforming the incumbent and showing leadership. If elected, that person would have certain powers and responsibilities under the presidential system, but would nonetheless “coordinate” the six opposition leaders, who would actually govern the country under the parliamentary system. Indeed, the opposition’s presidential candidate would then face the criticism that they have subjected the power of the majority to the guardianship of the six opposition leaders. Likewise, they would have to take responsibility for the power struggle among the six chairpersons. That idea of a symbolic president, which is rooted in the opposition’s “opposition to another Erdoğan,” would certainly be ruined by the limits of their powers, responsibilities and performance.

Thirdly, the coalition’s mandate and power sharing: The “table for six” wants to establish a concrete transition process and coalition structure ahead of next year’s elections. It remains unlikely for the opposition leaders and their presidential candidate, who have vastly different political backgrounds and opinions, to persuade the electorate about their union ahead of the election. If the opposition bloc were to win, the country might have to cope with an unprecedented level of incoherence, ineffectiveness and chaos under a coalition of six parties (which include nationalists, liberals and social democrats) as well as possibly the Peoples’ Democratic Party (HDP). The Turkish people still remember the 1990s, when coalition governments featuring two or three parties proved unsuccessful and caused many crises. As such, the kind of power struggle that could ensue within an odd coalition of seven political parties would be unimaginable.

Fourthly, a common vision/program: It is extremely difficult for that coalition, which brings together political parties with contradicting views, to present a common vision to the people – which would suggest that they could govern. They could perhaps reach weak and unambitious agreements on key issues like counterterrorism, foreign policy and the economy. Even those agreements would merely amount to an ambiguous stance in the face of the People’s Alliance’s unity. If, however, the opposition bloc were to develop an ambitious program, which would also cover the Kurdish question, those six parties could not possibly stay together. At the end of the day, they cannot connect with the electorate by sticking to abstract principles alone.

To address those four contradictions simultaneously, the “table for six” will have to meet many more times for sure.

Can they dare for a new ‘Kurdish opening’?
Next
Loading...
Loading...
We use cookies to ensure that we give you the best experience on our website. If you continue to use this site we will assume that you are happy with it.Ok