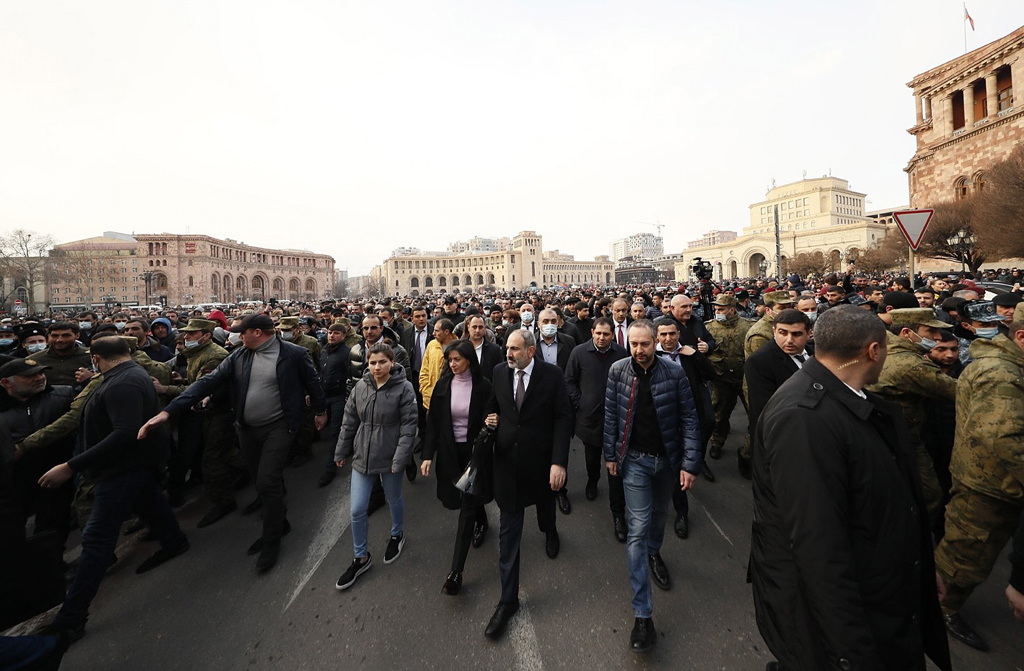 Will Biden save Pashinian from trouble?

Pashinian, a pro-American politician, could not strike a healthy balance between the Russian influence over his country and his government’s policy of closer cooperation with the Western alliance.

Armenia’s Prime Minister Nikol Pashinian is in trouble. The country’s military just issued a memorandum urging his government to step down. Describing the ultimatum as a “coup attempt,” Pashinian dismissed the military’s top commander and took to the streets with his supporters. That former President Robert Kocharian and former Prime Minister Vazgen Manukyan endorsed the military’s statement shows that Armenia’s politics are out of control.

Hardly anyone finds it surprising that Armenia, which suffered a humiliating defeat in the second Karabakh war, is experiencing turmoil. Tensions had been building up, as Armenians attempted to find someone to hold responsible for their defeat.

Under heavy pressure, Pashinian infuriated Moscow by claiming that Armenia’s Russian-made ballistic missiles did not work. The military, in turn, blames what happened on the prime minister’s misguided foreign policy.

To be fair, all of those claims are partly true.

Pashinian, a pro-American politician, could not strike a healthy balance between the Russian influence over his country and his government’s policy of closer cooperation with the Western alliance.

Failing to appreciate Azerbaijan’s military preparedness, support from Turkey and active diplomacy with Russia, he ended up making futile calls to Western capitals.

The solution was to hand over Azerbaijan’s sovereign territory, which was under Armenian occupation, to Baku. Instead, Pashinian, suffering from jingoism, started an unwinnable war.

It is no secret that Armenia’s Russian-made defense equipment proved ineffective against the Turkish armed drones.

For three decades, Azerbaijan made preparations to liberate Nagorno-Karabakh, whereas the Armenians planned its defense.

Indeed, the Armenian forces dealt heavy blows to Azerbaijan’s military in the early stages. Over the following days, however, armed drones devastated Yerevan’s line of defense and determined the outcome of the war.

Armenia, whose hopes were tied to Russian weapons and political support, is unmistakably disappointed in Moscow’s wartime policy.

Pashinian’s attempt to blame the defeat on Russia, however, disturbed the fragile balance.

Pro-Russian soldiers and politicians thus joined forces to remove the Armenian prime minister from power. Pashinian, who came to power on the back of popular protests in 2018, is unlikely to keep his seat after his humiliation in Nagorno-Karabakh.

He has to choose between resignation, early elections or the threat of a coup, in which the military and the opposition will be complicit – as was the case in Egypt.

Several questions now need answering: Is the Kremlin merely threatening the Armenian prime minister or intent on ending his rule? Or do the Russians want to finish what they started before Joe Biden, the White House’s new resident, takes action?

Will the Joe Biden administration rush to Pashinian’s aid, per its commitment to “defend” democracies? We will soon find out.

Whereas Moscow expressed concern and called for a peaceful resolution, Ankara condemned the coup attempt unequivocally. Foreign Minister Mevlüt Çavuşoğlu said that Ankara was “opposed to coups and coup attempts wherever in the world they may take place.”

The Turkish government’s opposition to the coup attempt is, first and foremost, a matter of principle.

That policy is directly related to the fact that Turkey experienced a coup attempt just five years ago.

Moreover, Turks do not want Armenia to suffer from political turmoil or to set the stage for a civil war.

Turkey’s preference is to promote peace, cooperation and economic integration in the South Caucasus. Hence the proposed establishment of a six-party mechanism.

Stability in the Caucasus, the Caspian and Central Asia would facilitate the transportation of energy and trade – which serve Turkey’s interests. The creation of a land corridor between Turkey and the Turkic republics via Nakhchivan, too, is good news for Ankara.

Peace between Azerbaijan and Armenia, normalization between Turkey and Armenia, and Armenia’s reintegration to address its economic problems are key to stability in the Caucasus.

The rise to power of coup plotters, who will launch a new war against Azerbaijan, or Armenia’s deterioration into a failed state due to Russian-American competition, would create many problems, including irregular migration.

It would seem that the coup attempt in Armenia will test the Biden administration’s commitment to containing Russia and defending democracies.

Biden's test with post-Trump Middle East
Next
Loading...
Loading...
We use cookies to ensure that we give you the best experience on our website. If you continue to use this site we will assume that you are happy with it.Ok