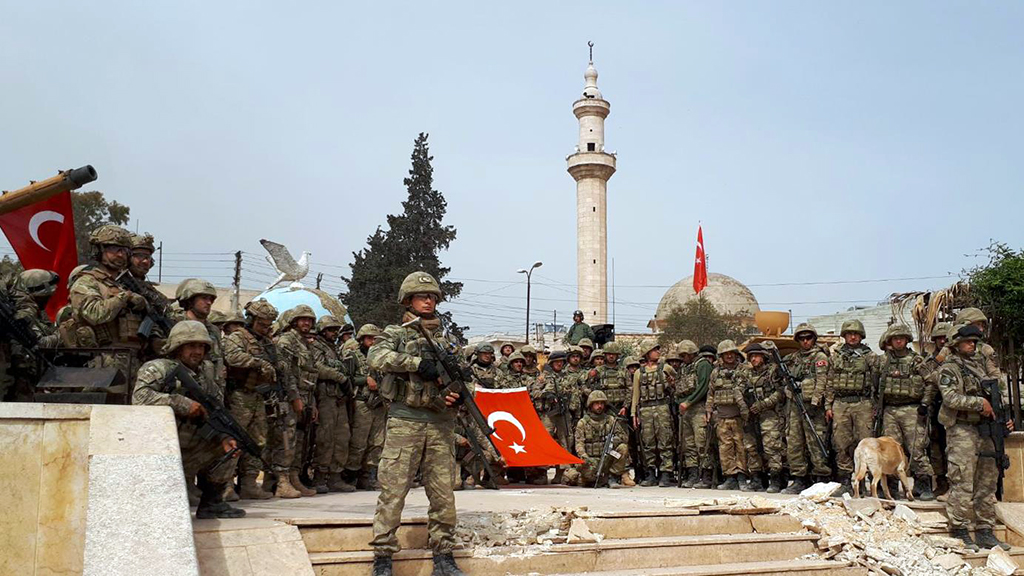 Why Western media is wrong about Turkey’s fight against Daesh

After U.S. President Donald Trump's decision to withdraw U.S. soldiers from Syria and his ensuing statements where he attributes the strong positive role that Turkey would play in the fight with remnants of Daesh, many analysts in Western media have expressed their doubts.

After U.S. President Donald Trump’s decision to withdraw U.S. soldiers from Syria and his ensuing statements where he attributes the strong positive role that Turkey would play in the fight with remnants of Daesh, many analysts in Western media have expressed their doubts. Although reasonable critics exist, many pieces are shocking given the extent of nonsense within their arguments. These pieces are significantly biased, uninformed, and misguided which stem from the fact that these analysts observe Turkey mainly from the perspective of power struggles in Turkey’s domestic scene, rather than the country’s everlasting search for security in the volatile Middle East. Providing some essential facts could help explain how Turkey has fought against the notorious Daesh and to clarify Turkey’s military and intelligence capabilities, considering the fight on many fronts against the terrorist groups from Daesh to the PKK’s affiliate groups, namely the Democratic Union Party (PYD) and its armed militia People’s Protection Units (YPG).

The extent of willingness

Turkey has been consistently blamed for focusing its fight against the YPG, which has often been vehemently characterized as the most effective fighter force on the ground against Daesh. It is argued that Turkey, by taking on the fight against the YPG, complicates the war on Daesh. Similarly, it is often contended that although Turkey agreed to join anti-Daesh coalition, it never actually fought with the terrorist group. The argument follows that it was the YPG militias backed by U.S. special operation forces that led the war on Daesh. Furthermore, it is claimed that Turkey does not have sufficient capabilities to deal with the remnants of Daesh and the possible retaliatory attacks of the YPG concurrently.

Given Turkey’s adjacency to the civil war in its south, its close proximity to the Daesh operational zone as well as the PKK’s exploitation of the power vacuum in Syria, Turkey has been exposed to substantial security challenges to an extent hardly matched by any other country recently. Indeed, Turkey may be criticized for its inability to prevent previous egregious Daesh attacks in Turkey, which left hundreds dead and many more wounded.

The problems in controlling the Syrian border are compounded by an unprecedented modus operandi of the new face of terrorism which posed unique security challenges. Nonetheless, Turkey has ensured that large-scale security raids are going to be continued until the eradication of the last terrorist Daesh cell in the country.

Daesh launched its latest attack in Turkey on New Year’s Eve, Jan. 1, 2017, meaning that the terrorist group has lost its capacity to conduct new attacks on Turkish soil for two years despite its opportunities to carry out such strikes in Europe and the North America throughout 2017 and 2018. Turkey’s successful achievement in halting Daesh attacks stems from a multitude of factors, including enhancements in awareness, readiness, experience and intelligence.

Turkey’s counterterrorism policy has undergone profound changes to counter quietly trained and battle-hardened Daesh militants who often resisted Turkish police with sophisticated assault rifles and explosive materials during security raids, causing casualties among security forces and reducing the effectiveness of operations. On the other hand, a careful observer of the issue can grasp that as a result of the increased readiness and awareness against the Daesh threat in Turkish counterterrorism, numerous Daesh attacks were foiled without losing single security personnel despite continuing armed resistance.

What is more is that Turkey accelerated its efforts to boost the number and quality of special operation brigades in recent years ranging from the Police Special Operation Department to Army commandos, including specialist soldiers. The urban warfare against the PKK in 2015 and the fight against Daesh in northern Syria in 2016 proved the effectiveness of these components in dealing with asymmetric threats in different environments.

Enhancements in intelligence gathering and the boost of operational tempo were other decisive elements in halting more Daesh attacks in Turkey. Interrogations of captured Daesh militants, including key individuals from its leadership cadre, provided the Turkish security and intelligence community with information on the organizational structures, procedures, strategies and tactics of the terrorist group. For instance, the capture of nightclub attacker Abdulgadir Masharipov led to the dissolution of many sleeper cells where key terrorists from the Daesh leadership cadre were arrested. Turkey arrested more than 4,000 individuals for being members of Daesh and about 1,000 suspected Daesh foreign terrorist fighters are currently being held at repatriation centers.

According to some senior retired figures in Turkish security bureaucracy, key intelligence warnings about potential Daesh attacks in Turkey were deliberately covered up by Gülenist Terror Group (FETÖ) members in the past. Similarly, Interior Minister Süleyman Soylu argued that, “FETÖ provided intelligence and action support to terrorist groups like Daesh and the PKK and leaked classified information through these actors.” The clearance of FETÖ elements from security bureaucracy facilitated the effectiveness of intelligence gathering and interagency intelligence sharing while increasing the operational initiative.

Furthermore, Turkey planned and started its physical border security project which visions protecting the country’s southern border with high-tech equipment, professionally trained security personnel and concrete walls, among others. Therefore, although Turkey was initially caught unprepared for the Daesh threat, the country has made considerable investments in enhancing its capabilities in a multitude of key sectors to fight Daesh. Ultimately, these measures deterred Daesh operatives in Syria from attempting to cross into Turkey while making an important contribution to the efforts to cut off the flow of more foreign fighters into conflict zones. Turkey prohibited tens of thousands of individuals from entering the country because of their suspicious ties to Daesh.

Turkey’s Operation Euphrates Shield is often criticized in the international media for aiming to stop further YPG advances and to preclude them from unifying their enclaves, rather than fighting Daesh. It’s true that one of the major concerns of the operation was to block the YPG’s expansion toward eastern Syria, which originates from perfectly legitimate security concerns due to the YPG’s logistical support of PKK terrorism in Turkey. Nevertheless, evidence suggests that as a result of the operation, thousands of Daesh members were neutralized and the bloody Daesh was eradicated from strategic areas such as al-Bab and Dabiq by the Turkish Armed Forces (TSK) and the Free Syrian Army (FSA).

Furthermore, Operation Euphrates Shield has contributed to Turkey’s intelligence, surveillance and reconnaissance efforts thanks to the military-administrative monitoring, surveillance missions of special operations forces and increased technical intelligence gathering in northern Syria, which could be seen as critical tasks to dispel terrorist threats at their origin; thereby, blaming Turkey for curbing the territorial ambitions of the YPG by disregarding the former’s contribution to wiping out Daesh in northern Syria, which constitutes a dilemma if the main mission of the anti-Daesh coalition was to degrade and destroy Daesh.

Bearing in mind the basics elaborated above, blaming Turkey for fighting with the YPG and denigrating its fight against Daesh is unfair. Contrary to conventional wisdom in Western media, where it is often claimed that Turkey has neither the intention nor the capability to deal with the remnants of Daesh after the U.S. withdrawal, Turkey can basically take over the fight. Standing as the second-largest army in NATO as well as experienced in counterterrorism, counter-insurgency and urban warfare, Turkey has a strong will and the capability to handle the Daesh remnants where Turkey could also significantly contribute to preserving the territorial integrity of Syria.