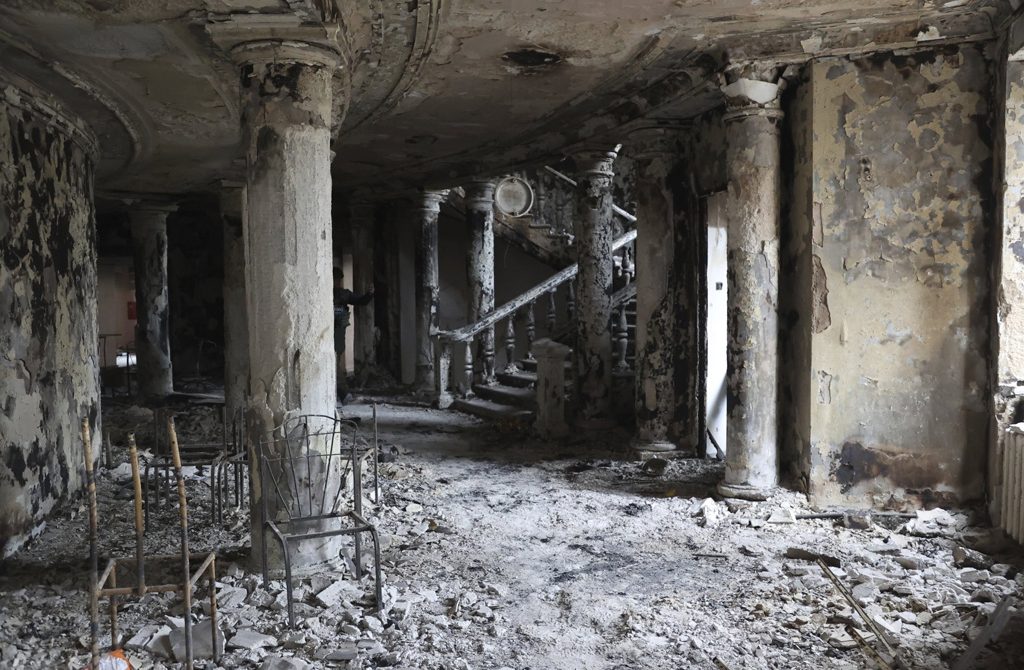 Debris covers the inside of the Mariupol theater damaged by Russian attacks in Mariupol, eastern Ukraine, April 4, 2022. (AP Photo)

Where is the Russia-Ukraine war heading?

Despite all their humanitarian rhetoric, Western countries insistently refrain from participating in the peace process to end the Russia-Ukraine war

Before the eruption of the conflict, Western countries did little, if anything, to deter Russia from declaring war against Ukraine. As a matter of fact, some even encouraged the Russian leadership to initiate the war by clearly stating that they would not send any military troops to Ukraine. Western countries did not respond harshly to the Russian invasion of Crimean Peninsula and the creation of independent political entities in the Donbass region. In addition, Russia’s gains in its previous military interventions, such as in Georgia and Syria, also contributed to the intervention decision.

With the beginning of the war, Western countries consolidated their powers and mobilized their resources to punish Russia. Considering Europe’s high level of dependence on Russian gas, the Russian leadership likely did not think the Western front would unify in a short period of time. The Russian attempt to invade the Ukrainian capital Kyiv and its attacks on almost every Ukrainian city caused a shock not only to the Ukrainians but also to the global public – Western countries in particular – since Russia had breached expectations. That is, with the overall attacks on Ukraine, Russia crossed a red line. Therefore, I believe the Western front’s quick response was a reaction to the national scale of Russia’s war and its violation of the red line declared by Western countries.

Most observers were expecting Russia to conduct a limited military operation focused on the southeastern part of the country, namely the Donbass region and Crimean Peninsula. In other words, based on the prewar explanations made by the Western leaders, it seems that the West was ready to accept a limited Russian military operation against these two pieces of Ukrainian territory.

The most recent reshuffling of Russian forces from Ukraine’s north to the Donbass region can be seen as an indication of the Russian return to Western expectation levels. Thus, the Russian leadership is demonstrating its intention to begin diplomatic negotiations.

The Turkish leadership, which is trusted by the warring sides, has repeatedly declared that it’s ready to host negotiations. As a country with cooperative relations with both sides, Turkey emerged as an alternative to Belarus, which has been following a strictly pro-Russian policy throughout the crisis. While Turkey has criticized Russian aggression against Ukraine, it is not trying to punish the Russian state.

Since the eruption of the Ukrainian crisis, the Turkish government has been following an independent policy in regard to the situation. Turkey has been trying to prevent an escalation and contribute to the resolution of the crisis through diplomatic means. For that reason, Turkey’s President Recep Tayyip Erdoğan declared at the beginning that the issue must be solved by reviving the Minsk Process negotiations within the context of the Organization for Security and Co-operation in Europe (OSCE). Unlike some Western countries, such as the United States, that attempted to deal with the problem through the NATO alliance and viewed the situation from a military/security perspective, Turkey has opted to approach the issue from a political perspective.

Since the war’s outbreak, Turkish officials have continued their efforts to bring the conflicting sides to the negotiation table. They managed to take the first step when the foreign ministers of the warring countries met at the Antalya Diplomacy Forum. Then, Turkey hosted representatives from the Russian Federation and Ukraine in Istanbul on March 29. President Recep Tayyip Erdoğan also participated in the negotiations and made a speech, which was applauded by both sides. Erdoğan has declared that he is ready to host the two leaders, Ukraine’s President Volodymyr Zelenskyy and Russia’s President Vladimir Putin, and has underlined several significant factors. First, he called Putin to consider a cease-fire and ultimately peace. Second, he recommended that Russia does not expand its occupation, which will ultimately cause more casualties on both sides, and urged Putin not to close the door on an “honorable exit.”

Will they sit for talks?

On the one hand, considering the explanations made by the Ukrainian officials, Kyiv is prepared to give up on joining NATO and remain a neutral state and to stop its efforts to acquire nuclear weapons. On the other hand, the most recent Russian withdrawal from the north of Kyiv indicates that Russia is also ready to sit down for negotiations to end the war.

However, there are many questions to be answered and it remains to be seen whether the negotiations and mediation process initiated by Turkey will yield a final result or not. It seems that the warring sides are gradually coming to an agreement. One of the biggest challenges, however, is the position of the Western countries. On the one hand, they may want Russia to remain stuck in the Ukrainian swamp and suffer more. That is, they will continue to impose sanctions on Russia and prevent the country from making an honorable exit.

On the other hand, they do not want Turkey, which is still otherized by many Western countries, to reap the benefits of mediation. We should not forget that Western countries in 2010 prevented Turkish (and Brazilian) efforts to mediate between Iran and the “P5” countries, a reference for the U.N. Security Council’s five permanent members, China, France, Russia, the U.K. and the U.S. Even though Turkey and Brazil had persuaded Iran to accept the international community’s demands, the Western countries did not accept the deal. It would not come as a surprise to see a similar reaction from the West in this instance. Unfortunately, in spite of all their humanitarian rhetoric, as long as the national interests of Western countries require the continuation of the war, they will try to undermine the negotiation process.

The course of the Russia-Ukraine war is changing
Next
Loading...
Loading...
We use cookies to ensure that we give you the best experience on our website. If you continue to use this site we will assume that you are happy with it.Ok