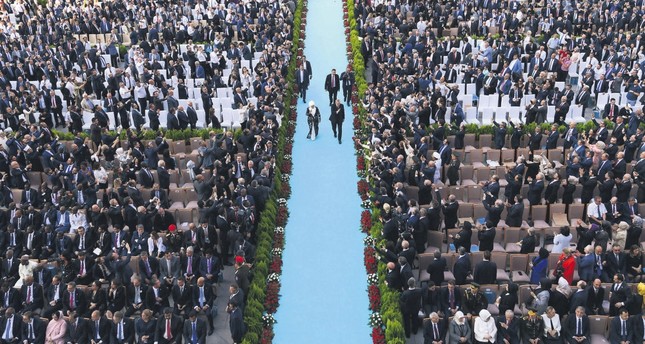 President Erdoğan and his wife first lady Emine Erdoğan greet people as they arrive at the Beştepe Presidential Complex in Ankara, July 9.

Turkey’s new Cabinet and the transformation of bureaucratic rule

Following President Recep Tayyip Erdoğan's announcement of the Cabinet under the new presidential system, Turkey's bureaucracy will also face a major transformation in accordance with the requirements of the new system.

Following President Recep Tayyip Erdoğan’s announcement of the Cabinet under the new presidential system, Turkey’s bureaucracy will also face a major transformation in accordance with the requirements of the new system. The government published new emergency decree laws to regulate institutional structure and create more efficient state bodies. All regulations up until now have carried the essential characteristics of the presidential system and will trigger transformation in Turkish bureaucracy. Thus, it is crucial to evaluate the changes in Turkish bureaucracy with a path-dependent approach to predict the possible outcomes of the new regulations in the short and long-term.

Indeed, the main characteristics of the new Cabinet also carry the traces of the new bureaucratic structure. Almost all the names in the Cabinet carry profound experience in their area of expertise. Most are from the bureaucracy, politics, nongovernmental organizations or the business world and are highly experienced in the areas of their ministries. Their profiles are compatible with the appointments based on experience and expertise in the presidential systems. So, it is not surprising that ministers from outside politics make up the majority in the new Cabinet.

Roots of the guardian bureaucracy

At this point, the most pressing question is: How will bureaucratic tradition transform with the new regulations and practices? Giving a proper answer to this question necessitates understanding the role of bureaucracy in Turkish politics. After the foundation of the Turkish republic, Turkish bureaucracy became in charge of representing the national will and protecting Republican values in accordance with their caste and guardian bureaucracy identity. After the Democrat Party (DP) came to power, the bureaucracy conflicted with politicians in this party, especially Adnan Menderes, because the party came to power on the claim that they would represent the people’s will contrary to bureaucracy. This conflict was the first phase of the clash between bureaucrats and politicians in Turkey.

During these terms, bureaucracy aimed to shape ideologies, behaviors and values in this direction. Research conducted with bureaucrats during the 1960s showed that they had put faith in their competence in policy-making and decision-making, compared to politicians who were not fit to rule according to their approach. Indeed, these bureaucrats produced their own version of Kemalism to serve as guardians of the system, especially after the 1950s with the beginning of the multi-party period.

The first striking rupture in the bureaucratic hegemony happened in the 1980s with the effects of Turgut Özal’s neoliberal perspective. Since the 1980s, Özal had tried to transform bureaucratic structure in Turkey by emphasizing civic values and the primary positions of politicians in the governance rather than appointed bureaucrats serving the official ideology. One of Özal’s aims for transforming bureaucracy was creating more open-minded bureaucrats with deep expertise in their field. Nonetheless, even though he tried to make major changes in bureaucratic rule, he was unsuccessful due to resistance from both the bureaucracy and military, which still held an enormous amount power on politics.

The second and permanent rupture happened when the Justice and Development Party (AK Party) came to power in 2002. The AK Party governments emphasized the establishment of transparent and efficient bureaucratic rationality in Turkey, with reforms formed, implemented and evaluated in accordance with this aim. As the DP and the Motherland Party had faced in the past, the AK Party has also faced off with the civil, military and judicial bureaucracy from time to time. Nevertheless, the AK Party has managed to overcome the obstacles in the bureaucracy and has continued to serve the people.

The final stage of the transformation of bureaucracy was switching to a presidential system in which efficiency and accelerated decision-making are crucial. After the approval of presidential system in a public referendum, adjustment laws were passed to align state institutions with the new system. All these regulations also aimed to reduce bureaucratic inertia in Turkey – which was very common indeed – to increase efficiency in state bodies. After the June 24 elections, the full-fledged and clear-cut implementation of the presidential system required new regulations to shape bureaucratic institutions. Thus, the recent emergency decree laws were issued to abolish old institutions and to form new ones.

It should be emphasized again that the transformation of bureaucratic rule will bring transparency, efficiency and bureaucratic rationality and accelerated decision-making to Turkish bureaucracy. It will also settle more democratic rules in Turkish bureaucracy in the long-term and prevent the emergence of an ideology-oriented bureaucracy again. As Erdoğan emphasized in the past, the state should serve the people, not the opposite. Thus, Turkish people not only witnessed a regular Cabinet formation on Monday, they also saw an important step toward the further democratization of state institutions, which will help Turkey become a more consolidated democracy in the future.

* Researcher at the SETA foundation, Ph.D. student in political science at Bilkent University

July 15: Anniversary of the resistance for democracy
Next
Loading...
Loading...
We use cookies to ensure that we give you the best experience on our website. If you continue to use this site we will assume that you are happy with it.Ok