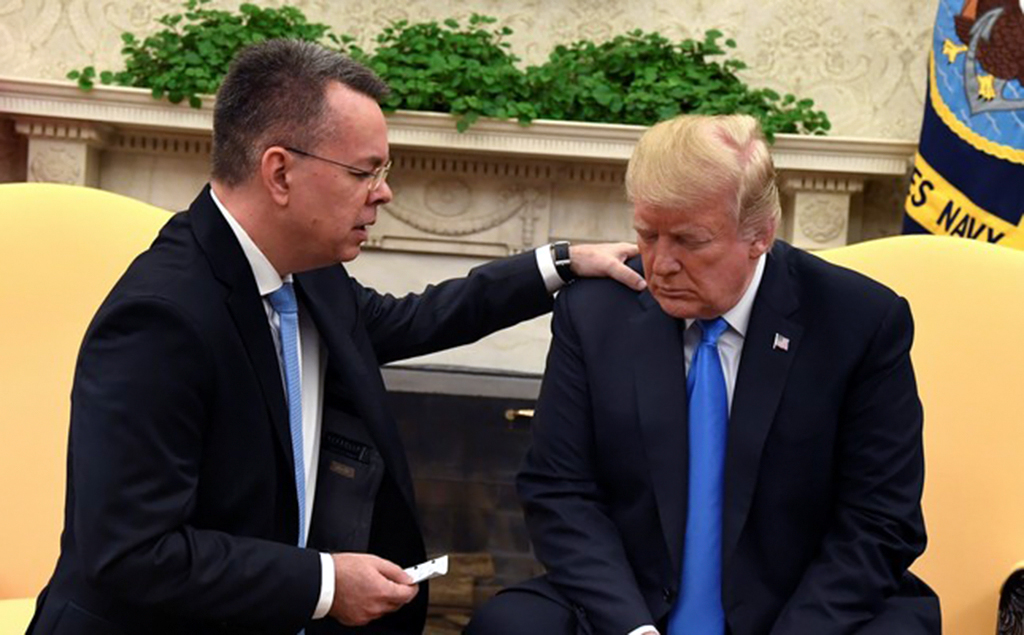 U.S. President Donald Trump closes his eyes in prayer along with pastor Andrew Brunson, after his release from two years of detention in Turkey, in the Oval Office of the White House, Washington, Oct. 13.

Turkey-US relations after the Brunson affair

Turkey is still the most significant regional actor enabling the U.S. to secure its credibility and reputation across the whole Middle East

A Turkish court sentenced Andrew Brunson to three years, one month and 15 days in prison on the charge of “assisting a terrorist organization.” Espionage charges have been dropped as multiple witnesses changed their testimony. The court ruled for Brunson’s release, taking into consideration the amount of time he had spent behind bars during the proceedings. In other words, the man at the center of a diplomatic crisis between Turkey and the United States hasn’t been acquitted. The court has reached a decision akin to Enis Berberoğlu’s three-year prison sentence. An appeals court will review the ruling.

The Brunson trial wasn’t just a legal affair but also a politically-charged case that fueled tensions between Washington and Ankara. Under pressure from evangelical leaders, U.S. President Donald Trump targeted Turkey on Twitter and proceeded to sanction two members of President Recep Tayyip Erdoğan’s administration. In this sense, Friday’s court ruling made it possible for the two countries to cross off one item from their list of political disagreements. There is no doubt that Trump will present Brunson’s release as a major success ahead of next month’s midterm elections to score points with evangelical voters. Although the ruling will be subject to speculations and public debate, it is important to keep in mind that Turkey succeeded in bringing the legal process to its conclusion.

In the end, the elimination of a flashpoint between Turkey and the United States, which crippled leader-to-leader diplomacy in recent months, will benefit bilateral relations. Yet a range of other problems continue to put strains on the relationship. Hakan Atilla’s incarceration, problems with the implementation of the Manbij agreement, Washington’s continued military support for the People’s Protection Units (YPG) militants, Turkey’s plan to purchase the S-400 missile defense system from Russia, uncertainty surrounding the delivery of F-35 fighter jets to Turkey, and additional U.S. sanctions on Iran, which will kick in next month, immediately come to mind.

Having cleared the Brunson hurdle, Turkey and the United States must launch a new period of negotiations.

First, the two leaders should have a face-to-face meeting to repair their relationship. Then there ought to be a breakthrough in bilateral relations. As the Khashoggi affair has established, the Trump administration’s failure to cooperate more closely with Turkey has resulted in new crises and scandals in the Middle East.

Spoiled crown princes could serve Washington’s short-term interests by stockpiling weapons. Yet the United States must remember that Turkey remains its strategic partner if it wants to counterbalance Russia’s growing influence over the Middle East, the Black Sea and the Eastern Mediterranean. Growing tensions between Iran and the Gulf could potentially spark new conflicts, which will either pull Washington in or push it further away from the region.

Meanwhile, the balance of power in Syria continues to shift to the disadvantage of the United States. An agreement between

Turkey and Russia on Idlib turned all eyes east of the Euphrates River. In other words, the successful demilitarization of the area designated under the Turkish-Russian deal isn’t just fueling optimism about the future. At the same time, the agreement makes it easier for Turkey and Russia to be more vocal about their concerns regarding the situation in certain parts of Syria that are controlled by the U.S.-backed YPG militants. In recent days, Russian Foreign Minister Sergey Lavrov said that Moscow was concerned about efforts by the United States and YPG militants to undermine Syria’s territorial integrity. Erdoğan, in turn, continues to reiterate his commitment to launch a military operation east of the Euphrates River.

In the wake of the Brunson ruling, President Trump must pay more attention to the recommendations of James Jeffrey, the State Department’s special representative for Syria engagement, and work more closely with the Turks. Tensions won’t go away completely until the United States revises its Syria policy and stops supporting the YPG militants. If bilateral issues between Turkey and the U.S. evolve into structural problems, leader-to-leader diplomacy won’t be enough to solve them. That’s why the two countries must make an effort to repair their relationship now.

The ball is in Washington’s court.

Remaining obstacles for the betterment of Turkey-US ties
Next
Loading...
Loading...
We use cookies to ensure that we give you the best experience on our website. If you continue to use this site we will assume that you are happy with it.Ok