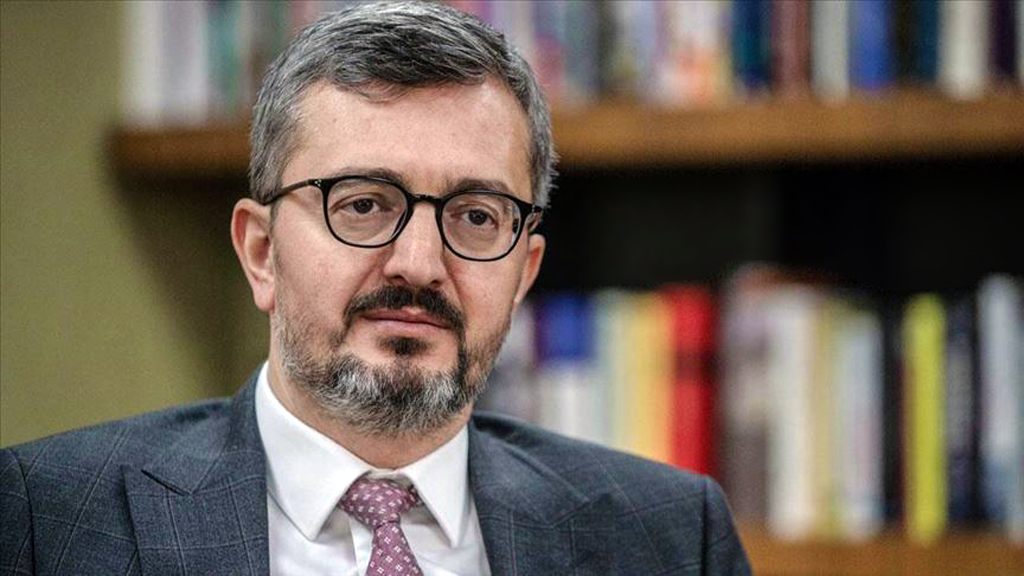 Burhanettin Duran, Director of the Foundation for Political, Economic and Social Research (SETA)

With its anti-terror operations, Turkey thwarts emergence of terror corridor near its borders, says think-tank chief

Having carried out three counter-terrorism operations in northern Syria, Turkey prevented the emergence of a terror corridor on its southern border, foiling plans made in the U.S. Department of Defense, according to an expert.

Burhanettin Duran, Director of the Foundation for Political, Economic and Social Research (SETA), spoke to Anadolu Agency about separate deals Turkey reached with the U.S. and Russia on northern Syria, as well as Ankara’s fight against the terror groups PKK/YPG and Daesh, also known as ISIS.

Referring to a recent Pentagon report claiming that Daesh took advantage of a U.S. plan to pull part of its troops out of the region where Turkey was conducting an anti-terror operation, Duran said the report was a response to U.S. President Donald Trump’s withdrawal decision which was partially due to pressure from Ankara.

Duran argued that the Barack Obama administration in the U.S. sought to fight Daesh terrorists with another terror group — the PKK/YPG — and did not care about the damage to the region.

“That [policy] was inherited by Trump,” he said, adding that the U.S. Central Command (CENTCOM) made brought Trump to support the PKK/YPG despite his initial inclination to cooperate with states, not non-state actors.

According to Duran, ties between PKK/YPG and U.S. had reached such a high level that Washington began to push for them to be elevated from a “tactical” relationship to “strategic”. In doing so, it sought to use the terror group against Iran, or else turn it into a state-like structure that would protect U.S. interests in the region.

He went on to say that Turkey’s anti-terror campaigns in northern Syria — the Euphrates Shield, Olive Branch and Peace Spring operations — prevented the formation of such a terror corridor.

Duran said that through the report, the Pentagon expressed its disdain at Turkey for foiling these plots that it “cooked up”, by raising the most common issue about the Syrian conflict: Daesh.

PKK/YPG not solution to Daesh trouble

Turkish operations in the region have the potential to eradicate Daesh infrastructure, unlike what is suggested by the Pentagon report, according to Duran.

He argued that Daesh first emerged in the prisons of Iraq following the U.S. invasion in 2003, then shifting to Syria. “Given that Daesh could emerge even when [Iraq] was under full control of the U.S., what sort of Daesh [alternatives] could emerge in a region controlled by PKK/YPG?” he asked.

He added that the fight against Daesh should be conducted by state actors, or else the grassroots levels of the terror group would remain alive.

Safe zone deals with US, Russia

Underlining that recent agreements for a safe zone in northern Syria with the U.S. and Russia were in accordance with Turkey’s Operation Peace Spring, Duran noted that these agreements indicated that the first phase of Ankara’s fight against the PKK/YPG was complete.

However, the terror group had yet to be removed from the 444-kilometer (276 miles) area by Russian and U.S. forces, he said.

Duran stressed that Turkey exhibited a balanced policy in its relationships with the U.S. and Russia, saying: “This balance is an approach centering on Turkey’s national interests.”

He added that “leader diplomacy” was practiced by all three countries and that President Recep Tayyip Erdogan’s talks with his American and Russian counterparts led to concrete results on the ground that enabled Turkey’s three anti-terror operations and contributed to its fight against PKK/YPG terrorists.

PKK/YPG use of Syrian oil as ‘crime’

He underlined that the U.S. did not seek to fully dismantle the terror group and continued to use it south of safe zone boundaries on the pretext of “protecting oil”.

“It is a crime in terms of international law,” he said, referring to the PKK/YPG and Syrian oil. “Both in the sense of violating the sovereignty of the Syrian state and openly supporting a terror group.

Duran underlined that Washington followed an asymmetric policy towards Turkey, which it must change. He said this asymmetric relation could not be imposed on Turkey under a strategic partnership or NATO.

In addition, he said Russian efforts to use Turkey by creating a conflict within NATO would not work out.

Ankara reached two separate deals with the U.S. and Russia to pause the operation to allow PKK/YPG terrorists to withdraw from a planned safe zone, where Turkey wants to repatriate the refugees.

In its more than 30-year terror campaign against Turkey, the PKK — listed as a terrorist organization by Turkey, the U.S. and EU — has been responsible for the deaths of 40,000 people, including women, children and infants. The YPG is the PKK’s Syrian offshoot.

'Welcome to the real world. It sucks. You're gonna love it.'
Previous

Opposition CHP crisis points to political plot within party
Next
Loading...
Loading...
We use cookies to ensure that we give you the best experience on our website. If you continue to use this site we will assume that you are happy with it.Ok