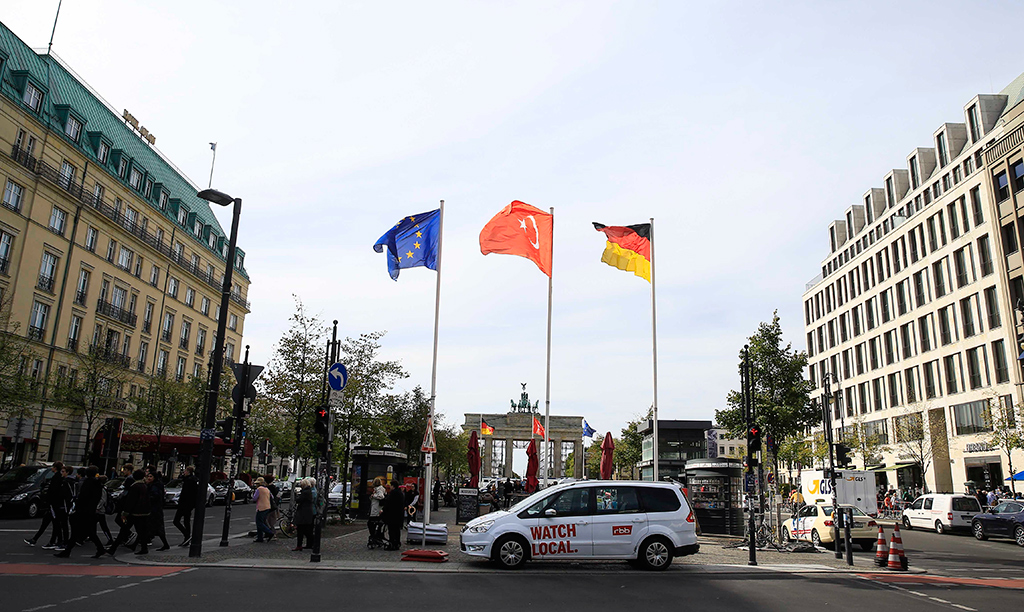 Turkish, German and EU flags wave near the Brandenburg Gate in Berlin, one day before President Recep Tayyip Erdoğan arrives to the German capital to meet with German President Frank-Walter Steinmeier and German Chancellor Angela Merkel.

Turkey and Germany: Strategic partnership in the making

If Ankara and Berlin can overcome the challenges of recent years, a new strategic partnership could be in the making

President Recep Tayyip Erdoğan has arrived at the German capital Berlin on Thursday. His goal is to expedite the process of normalization between Turkey and Germany. Both sides are eager to build renewed confidence and work more closely together on a range of issues. If Ankara and Berlin can overcome the challenges of recent years, a new “strategic partnership” could be in the making. The driving force behind this change can be detected in the speeches that Erdoğan and U.S. President Donald Trump delivered at the United Nations last week. The differences between their visions for the future of the international system were self-evident.

Trump’s U.N. address was a message to his domestic audience. World leaders laughed at the U.S. president when he claimed that his administration was more successful than any other administration in history. At the same time, however, Trump offered some insights into his campaign slogan, “America First,” which is a new brand of American exceptionalism. Stressing the importance of Washington’s sovereignty, he publicly rejected the “ideology of globalization” and announced that he subscribed to the “doctrine of patriotism.” This approach refers to a radical revision of international organizations and multilateral agreements. The U.S. president’s most recent attacks against the International Criminal Court, UNESCO and the United Nations Human Rights Council reflected this position. Spinning out of control on the podium, Trump recommended all member states to protect their independence and sovereignty. He thanked the North Korean leader and targeted Iran and Venezuela. Trump also praised Poland’s efforts to reduce its dependence on Russia, warning that the German government could become completely dependent on Russian energy unless it changes its course.

Erdoğan, in turn, called for a reform of the U.N. Security Council and highlighted pressing problems regarding income inequality, the fight against terrorism and refugees. He talked about Turkey’s humanitarian diplomacy around the world and called on the international community to set up “an equitable system of global government.” The Turkish president’s call was a constructive effort to encourage the United Nations to play a more prominent role in certain cases, including Somalia and Syria. Standing in stark contrast with Trump’s selfish interpretation of patriotism, Erdoğan highlighted global humanitarian responsibilities and stressed the need to create a “circle of justice.” He publicly opposed trade wars and economic protectionism by reiterating Turkey’s support for the World Trade Organization, the G20 and the customs union with the European Union.

The two leaders’ speeches at the United Nations established that Washington was going back to its pre-World War II foreign policy. Trump’s criticism against Berlin regarding energy dependence is just part of the problem. At the same time, the United States is unsettled by its trade deficit with Germany. There is no doubt that the transatlantic alliance must undergo certain structural changes. To be clear, Washington’s new direction is unlikely to change even if Trump leaves the White House. Europe’s relations with the United States will never be the same again. Washington won’t care about the negative side effects of its Middle East policy on its European allies. The Trump administration’s imminent sanctions on Iran and efforts to impose a deal on Palestine will create new problems for Turkey and Europe. Their effort to evade U.S. sanctions on Iran by creating a new financial mechanism without using the greenback is a case in point. Under the circumstances, Germany desperately needs Turkey to counterbalance Russia.

Which is why Erdoğan encouraged the German leadership to turn over a new leaf in bilateral relations ahead of his visit. In an op-ed essay for German newspaper Frankfurter Allgemeine Zeitung, he called on Berlin to work more closely with Ankara on counterterrorism, the refugee crisis, trade wars, mercantilism and the rise of far-right movements. Judging by the most recent developments, the term strategic partnership could refer to Turkey’s relations with Germany rather than the United States.

Turkish-German Relations: From Conjunctural Cooperation to the Solution of Structural Issues
Next
Loading...
Loading...
We use cookies to ensure that we give you the best experience on our website. If you continue to use this site we will assume that you are happy with it.Ok