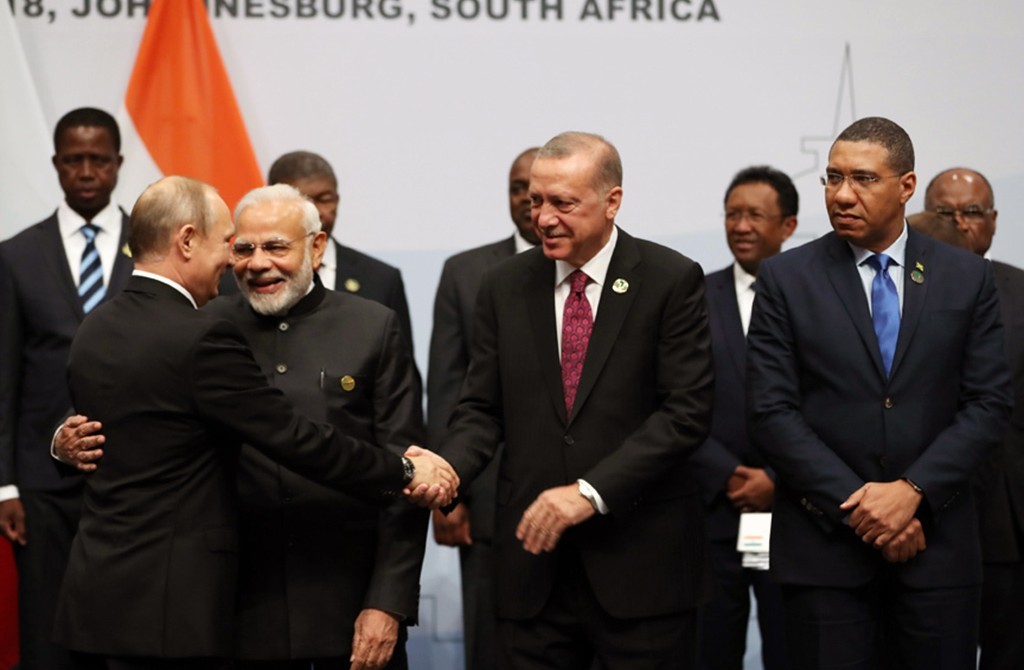 The world of alternatives

President Recep Tayyip Erdoğan’s participation in the BRICS summit in Johannesburg, South Africa last week was significant for Turkey’s search for a new direction. Unfortunately, Turkey’s efforts to join BRICS, namely Brazil, Russia, India, China and South Africa, within the G20, and the Turkish leader’s statements to members of the press, including myself, on his return flight from Africa, have been sidelined by growing tensions between Turkey and the U.S. over the legal case of American pastor Andrew Brunson. One word the president used in his remarks on the tensions with the U.S. caught my attention: “Alternatives.” Upon closer examination, Erdoğan was not just saying that Turkey would not bow to Washington’s threats. He talked about a broad range of issues and initiatives with reference to the word “alternative,” including: Turkey’s efforts to join BRICS and the Shanghai Cooperation Organization (SCO); promoting international trade with national currencies; responses to the threat of sanctions by U.S. President Donald Trump and Vice President Mike Pence; Turkey’s commitment to purchasing the S-400 missile defense system; Ankara seeking international arbitration over the delivery of F-35 fighter jets; criticism of the unfairness of Iran sanctions; Turkey’s eagerness to develop closer relations with Russia and China; and an upcoming summit in Istanbul, which will bring together Turkey, Russia, Germany and France to discuss the situation in Syria.

At a time when Trump issues random threats against his country’s allies and adversaries alike, Erdoğan discussed those issues as part of a broader search for “alternatives.” In the end, he summarized his position as follows: “We are not dependent on the United States. … The U.S. must keep in mind that it stands to lose a powerful and genuine ally in Turkey if it does not change its attitude.”Those words do not necessarily represent an ultimatum proposed by a powerful leader, who will be in power for the next five years, against his Western allies. Nor does Erdoğan subscribe to a new ideological approach that seeks to sideline the U.S. or leave NATO. If anything, Turkey wants to repair its relationship with key European countries – as the recent rapprochement with Germany and the Netherlands suggests. At the same time, the Turkish effort to hold talks with Russia, Germany and France on the brewing trade war, Syria and Iran hints that Ankara is seeking new partnerships.

As the definition of an “alliance” seems to change daily, allies tend to experience disagreements over strategy in many issues. Moreover, allies seek to cooperate with their old enemies on a range of other issues. For example, Turkey, Russia and two key European countries will get together in hope of finding common ground on Iran sanctions.

To be clear, it was Trump who irreversibly damaged the traditional notion of alliance. Based on his campaign motto, “America First,” the U.S. president has been trying to transform the post-World War II political and economic “liberal order.” To be clear, his targets are not limited to North Korea, Iran, China and Russia. Trump is willing to threaten countries like Turkey and Germany if necessary. He is not worried about the EU’s potential disintegration and supports Brexit, showing complete disregard for the destruction that trade wars could bring to the world. This is the world that the great powers must brace themselves for.

China cannot protect its global interests through strong economic relations, i.e. investments and loans, alone. If the U.S. proceeds to rely on its military and political power to pursue commercial interests, Beijing will find it difficult to sustain its networks in Latin America and Africa. Ultimately, China will have to find new strategic partners with independent foreign policies. The same goes for Russia and the European Union.With its independent foreign policy and strong political leadership, Turkey is capable of playing several strategic roles simultaneously.

The country went through a five-year period of turbulence, which made it stronger than before. Against the backdrop of global uncertainty, Turkey represents a resilient regional player for Russia, Europe and China. The fact that German Chancellor Angela Merkel will host the Turkish president in September despite vast anti-Erdoğan sentiments at home is directly related to that new reality.

There is no doubt that problems continue to emerge in the world of “alternatives” amid regional and global uncertainty. Turkey, however, will presumably find new opportunities over the next five years. Those who find ways to work with one side without abandoning the other will survive.

The evangelical burden and the destructiveness of threats
Previous

Trump's policies generate a loss of trust in the US
Next
Loading...
Loading...
We use cookies to ensure that we give you the best experience on our website. If you continue to use this site we will assume that you are happy with it.Ok