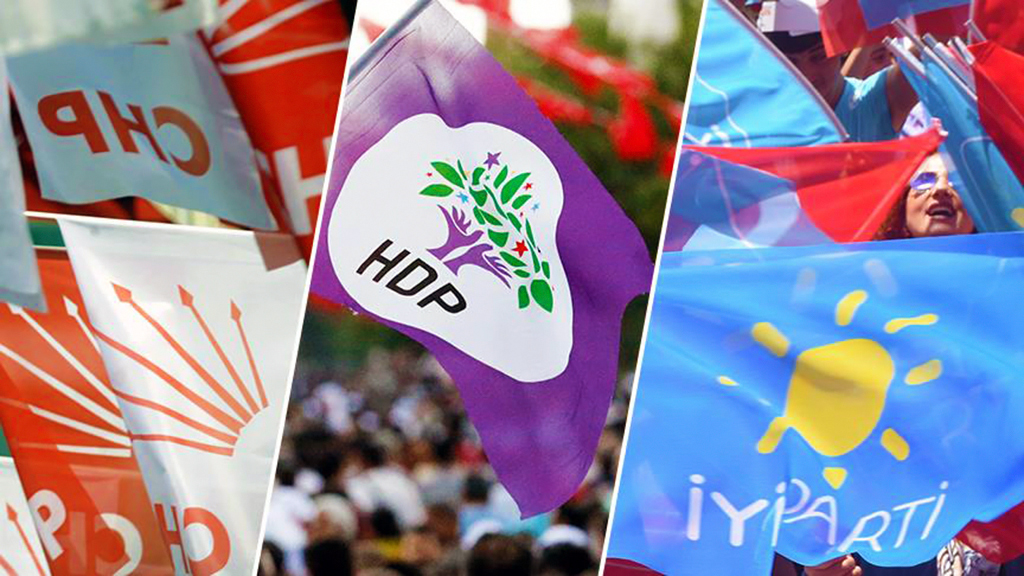 As Turkey inches toward the municipal elections, the "national survival" debate is deepening with new wars of words between competing definitions of nationalism.

As Turkey inches toward the municipal elections, the “national survival” debate is deepening with new wars of words between competing definitions of nationalism. Opposition leaders cannot stay away from the survival debate that President Recep Tayyip Erdoğan kicked off. At a campaign event in the city of Aydın, Good Party (İP) Chairwoman Meral Akşener claimed that Erdoğan had described 18 million voters as terrorists, “How are you, the people of Aydın, whom the president called terrorists?” she asked.

At the same event, Republican People’s Party (CHP) Chairman Kemal Kılıçdaroğlu fired additional salvos: “Until recently, you claimed to step all over all forms of nationalism. You cannot refer to [a president], who sells his own army’s weapons factories to a foreign country, a nationalist.”

Erdoğan responded by denying that he described Kurdish voters, who support the Peoples’ Democratic Party (HDP), as terrorists, and criticized Akşener for spreading lies.

In other words, both the People’s Alliance and the competing alliance centered on Kılıçdaroğlu portraying themselves as “true nationalists” to the people. Both sides accuse their opponent of betraying the nationalist cause. Here’s why the ruling party participates in that debate from a stronger position.

First of all, the race over nationalism on the campaign trail is nothing new. It is a leftover item on the political agenda from last year’s national elections. In June 2018, Kılıçdaroğlu and Akşener adopted a populist and exclusionary interpretation of nationalism to target Syrian refugees. This time around, the point of emphasis is “support for terrorism.” Kılıçdaroğlu’s controversial partnership with the HDP, whose chairman talks about the dream of “Kurdistan,” fuels tensions in Turkey.

The nationalism debate became more prominent for two reasons. Primarily, “nationalism” and “nativism” are making a comeback around the world. The crisis of globalist liberalism, experts argue, fuels populist nationalism in the United States, Europe and developing nations. For example, Jack Snyder predicts that global markets and supranational institutions will be compelled to adapt to the nation-state and nationalism. Nation-states, after all, remain the most reliable source of stability and democracy. At a time when the United States is trying to erect a wall across its border with Mexico and the European Union faces criticism for failing to stop the influx of some 1 million refugees, there is no doubt that nationalism will become more and more prominent.

The second reason is related to Turkey’s idiosyncratic circumstances. Since 2013, a series of attacks against the country engendered a new brand of national political consciousness. The popular resistance against the July 2016 coup attempt reflected that awareness. Keeping in mind that the United States continues to support the PKK terrorist organization’s Syrian affiliate, the People’s Protection Units (YPG), across Turkey’s southern border, the same political consciousness remains alive and kicking – with Erdoğan’s strong leadership at its core. Kılıçdaroğlu shot himself in the foot by trying to downplay the question of national survival because “the YPG won’t attack our country.” Even before uttering those words, he was under fire for working with the HDP.

Making the public debate about nationalism won’t help the opposition either. Embodied by Erdoğan, this new national identity recognizes the democratic rights of Turkey’s Kurds yet opposes separatism. It is based on love of country – rather than race, ethnicity or culture. As such, it disdains racism. As a leader who launched two reconciliation processes in the past, Erdoğan can afford to tackle separatist Kurdish nationalism head-on. By contrast, the CHP cannot invoke nationalism to account for its approach to the YPG, given the HDP’s support for the PKK’s “trench campaign.”

Turkey’s national identity has been redefined. The opposition stands to lose the current argument.

The age of Johnny English in the real world
Previous

YPG/PKK makes 12 attempts to target Turkey with drones
Next
Loading...
Loading...
We use cookies to ensure that we give you the best experience on our website. If you continue to use this site we will assume that you are happy with it.Ok