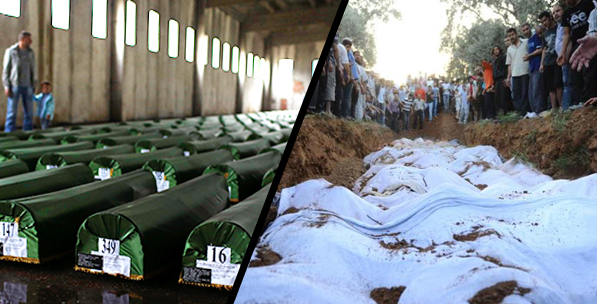 The Massacres in Syria and the Bosnian Experience

For how long will the perpetrators behind the killings in Syria be left to the conscience of real politics instead of international law as it was the case in the Bosnian War?

The systematic torture and massacres in Syria are now proven by photographs. These images have made the agenda on whether they would affect the decisions to be reached at the Geneva II Conference or not. However, in the face of the documents reflecting the systematic torture and tyranny which are evaluated in the scope of crimes against humanity, the real question that needs to be asked independent of the Geneva II agenda is whether or not sanctions, as the requirement of the international law, will be applied against the Bashar al-Assad regime.

Will the photos pricking one’s conscience today in Syria be enough to motivate the international community for an immediate action and find a political solution or will they be used as evidence during the prosecution of the war criminals? In order to find an answer to this question and project the fate of the killings in Syria, reading the past mistakes of the United Nations (UN) and the international community, and remembering the Bosnian experience may provide critical leads.

Photos of the Atrocity: Bringing the Human Tragedy in Syria to International Law
Previous