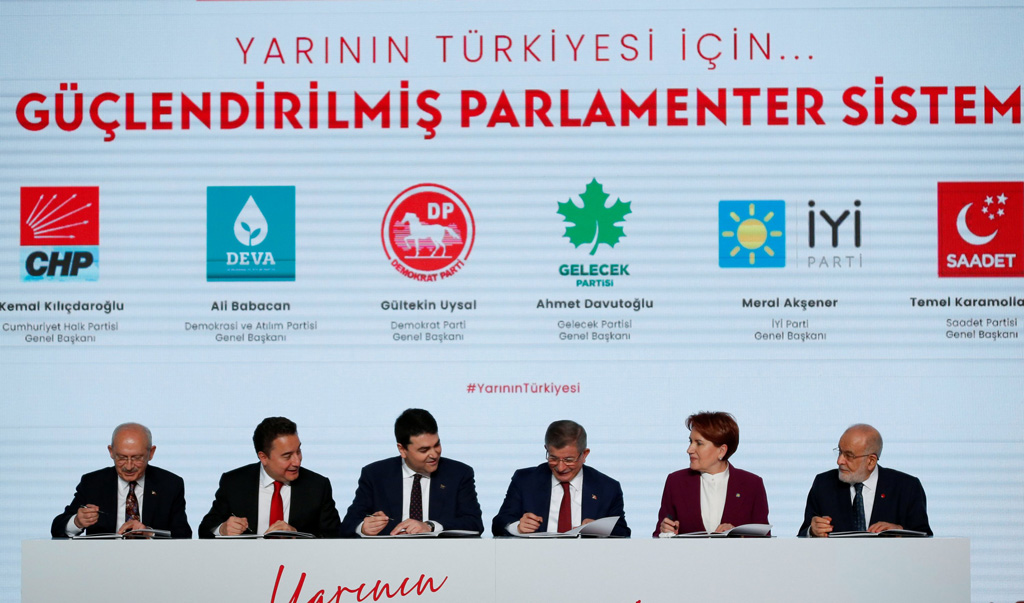 The chairpersons of the political parties in the opposition bloc – known as the “table for six” – attend a meeting in the capital Ankara, Türkiye, Feb. 28, 2022. (Reuters Photo)

The main dilemma in the Turkish opposition

The million-dollar question in Turkish politics is whether the opposition bloc – known as the 'table for six'– should stay together or disband.

The million-dollar question in Turkish politics is whether the opposition bloc – known as the “table for six”– should stay together or disband. With next year’s elections fast approaching, Türkiye’s opposition parties are finding it increasingly difficult to stick together. The most recent war of words started with Gürsel Tekin, a main opposition Republican People’s Party (CHP) parliamentarian, arguing that the Peoples’ Democratic Party (HDP) could run a ministry if the opposition were to win next year. The Good Party (IP) chairperson, Meral Akşener, delivered a harsh response: “We won’t sit at any table where the HDP has a seat and the HDP cannot sit at any table where we have a seat.” The debate further intensified due to the claim that some members of Akşener’s party were “winning contracts from the Ankara Metropolitan Municipality, which (the opposition) won thanks to HDP voters.”

CHP Chairperson Kemal Kılıçdaroğlu imposing himself on the “table for six” as the opposition bloc’s joint presidential candidate, his party’s insistence on collaborating with the HDP and Akşener’s visits to CHP-affiliated mayors (which keep them in the running for the opposition’s endorsement) also fuel tensions between the two heavyweights at “the table.”

Indeed, the people have been talking about the opposition bloc’s lack of focus and inability to perform as well as expected for some time now. Some political commentators have already placed bets on the table’s future. Yet others warn that flipping over the “table for six” now would result in the responsible party’s downfall.

Looking at the discussions between the opposition movements gathered around the “table for six,” one cannot help but ask the following question: Which comes with a heavier price tag – turning over the table or keeping it together?

The assumption is that leaving the table would hurt the relevant parties. It becomes more and more difficult, however, to remain seated at that table – given that the six opposition leaders seem unable to jointly endorse a presidential candidate and shake hands on a common agenda. At the end of the day, everyone knows that the metaphorical bike is doomed to crash unless one keeps pedaling.

Neither policy papers nor a timeline for the transition process, which the opposition bloc’s various working groups have prepared, can stop people from asking about the joint candidate. At the same time, there is an internal debate within the CHP as well as disagreements between the CHP and the IP over potential candidates and how to position the HDP vis-a-vis the “table for six.” Those factors place at risk the bloc’s future. In other words, the greatest challenges that the opposition parties face are not posed by the ruling party but by Kılıçdaroğlu, Akşener, their parties and supporters.

Under the circumstances, the government is left with no choice but to reach the following conclusion, which President Recep Tayyip Erdoğan recently drew: “The table for six has but one item on its agenda – to decide who will host their following meeting. They have made zero progress and taken no steps whatsoever. I believe that they won’t be able to make any decisions until the Supreme Electoral Board announces the winner.”

The opposition bloc’s lack of an ambitious program and a joint presidential candidate hurts them so severely that the government does not even need to criticize them. After all, the opposition leaders do not sit idly. They keep intensifying their rivalry.

While Kılıçdaroğlu drags out the prospect of his own candidacy to the point of no return, there is still talk of former President Abdullah Gül, Istanbul Mayor Ekrem Imamoğlu or Ankara Mayor Mansur Yavaş contesting next year’s presidential election. Meanwhile, the IP wants to become the leading center-right party as well as Türkiye’s largest opposition party. That is why Akşener’s movement insists on keeping the mayors of Ankara and Istanbul, whom the CHP chairperson had taken off the table, in the race.

Amid all those developments, there are some commentators that remind the opposition leaders that they are all on the same side, attempting to help the “table for six” refocus its attention by raising the question of a first-round victory.

My sense is that the opposition bloc is destined to lack focus. As such, they won’t be able to address that issue even if they try.

The most recent controversy surrounding the HDP clearly showed that the “table for six” coming up with an ambitious plan would take a toll on the relevant parties and their supporters. Indeed, the radical demands of the HDP – which aims to discredit Akşener by saying that she is “best known for her shady dealings” – include Türkiye’s restructuring.

That is certainly the main dilemma! The opposition preserving its lack of focus creates no fewer problems than actually addressing this problem. What makes matters worse for the opposition is that the ruling party has not even started resorting to campaign tactics.

The Greek war of attrition against Türkiye
Next
Loading...
Loading...
We use cookies to ensure that we give you the best experience on our website. If you continue to use this site we will assume that you are happy with it.Ok