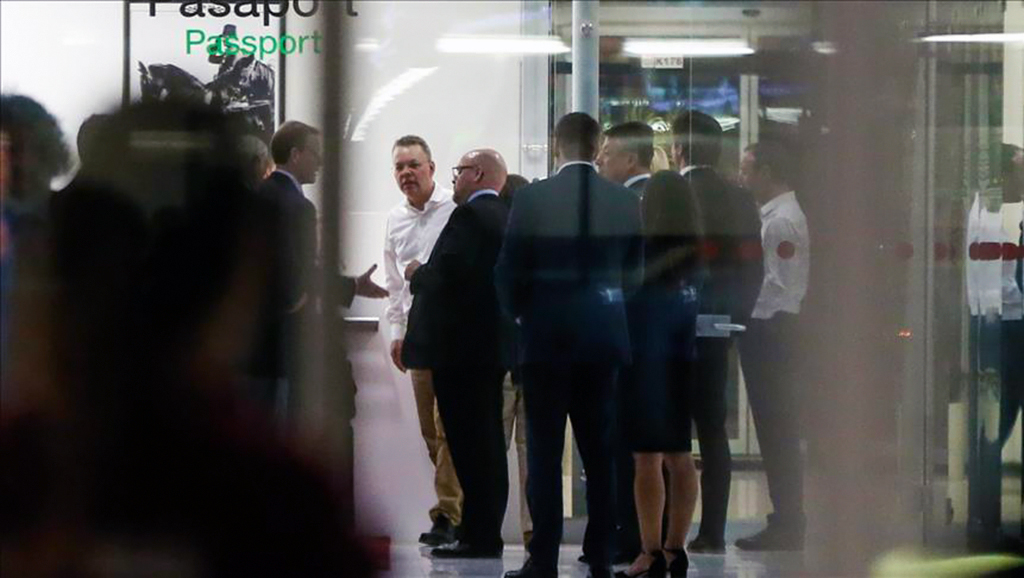 Remaining obstacles for the betterment of Turkey-US ties

A Turkish court released pastor Andrew Brunson from house arrest last week. His trial had brought Turkey-U.S. relations to a historical low. Over the last two years, the issue dominated the agenda of every meeting between the high-level officials of both countries.

A Turkish court released pastor Andrew Brunson from house arrest last week. His trial had brought Turkey-U.S. relations to a historical low. Over the last two years, the issue dominated the agenda of every meeting between the high-level officials of both countries.

For the last few months, however, the tension between the two countries escalated following a campaign in U.S. Congress and the Trump administration’s decisions to sanction two Turkish ministers. Turkish officials, from the very beginning of the crisis, reiterated that the Turkish judiciary will make the final decision about Brunson and they will not interfere in the legal process. The pressure and sanctions from the U.S. administration did not change this situation. During this period, mutual trust in relations hit rock bottom. The issue started to spill over and destabilize other spheres of bilateral ties and cooperation as well.

Now that he has returned home and met with U.S. President Donald Trump at the Oval Office, it would be interesting to see which direction the Turkey-U.S. relationship heads to next.

First of all, there were already signs of improvement in ties regarding some issues, even before Brunson’s release. Following the arrival of a new team on Syria, the U.S. administration started to adopt a more long-term strategy there. After some prolonged tension over U.S. military assistance for the PKK-linked People’s Protection Units (YPG), Turkey and the U.S. both shared the same position about the future of Idlib, albeit mostly for different reasons.

This recent mutual interest in Idlib has also shifted focus to some of the other issues in Syria, including the country’s stabilization and reconstruction after the civil war. This new dynamic, together with the potential revival of the Geneva process, can bring a new area of cooperation between the two countries. Of course, given the U.S.’ low credibility in Syria after years of inaction under Barack Obama, the possible improvement of relations have to start through some confidence-building measures that need to be adopted by the U.S.

The question about the future of the Manbij agreement and the YPG-held territories are now among the biggest irritants of the relations. Given the winding down of coalition operations in Syria, the U.S. administration needs to find a way to wrap up its “tactical, temporary and limited” relations with the YPG and respond to Turkey’s national security concerns. In this sense, the condition in Syria will be one of the most critical dimensions in the Turkey-U.S. relations in the region.

Secondly, there are a number of outstanding issues between the two countries. Turkey has not received any meaningful cooperation from the U.S. in some of them. The trial of former Halkbank executive Hakan Atilla was one of these issues. His arrest and trial created one of the most significant crises in bilateral relations. The Turkish government demanded his release from prison but is yet to get any positive response so far.

It is not the only case that disappoints Turkey in regards to the U.S.-Turkey relations. Following the July 15 coup attempt, the Turkish government asked the U.S. to start an investigation for the extradition of the Gülenist Terror Group (FETÖ) leader, Fetullah Gülen, who is in the U.S. in self-imposed exile.

There has been little to no improvement in this area. Furthermore, it was seen during Atilla’s trial that the members of the group were given witness status.

The illegally obtained tapes that were unlawfully brought to the U.S. were presented by FETÖ members. Thus this issue will continue to be trouble in the relationship between the two countries.

Moreover, the use of the F-35 joint project as a tool to pressure Turkey has created a serious lack of trust for the U.S. in Turkey.

The attempts to prevent Turkey from acquiring these fighter jets have so far been unsuccessful; however, it can generate a serious problem if it started to be discussed in a more serious setting. All of these problems generate a serious obstacle in the improvement of ties. The U.S. needs to take some steps and initiatives to prevent the consolidation of the negative atmosphere in relations.

Finally, there are potential areas of disagreements that may spoil the positive trend in relations. These are mostly about Turkey’s relations with two of its Astana partners, Iran and Russia.

First of all, it is clear that one part of the Syria strategy of the U.S. will be about the Iranian regional policies, but it is not clear if the U.S. is expecting anything from Turkey in that area. It is also not clear what Turkey’s response would be to a potential request of cooperation from the U.S. It is unclear how the implementation of sanctions on Iran will impact Turkey’s relations with the U.S. In addition, Turkey’s relation with Russia in particular, in regards to the purchase of S-400 missile defense systems, may seriously impact Turkish-American relations as well.

In light of this complicated agenda, we should expect a rather interesting time in U.S.-Turkish relations. The future of relations will depend on the successful navigation of diplomacy around these minefields and the effective use of opportunities.

Saudi Arabia before and after the Khashoggi case
Next
Loading...
Loading...
We use cookies to ensure that we give you the best experience on our website. If you continue to use this site we will assume that you are happy with it.Ok