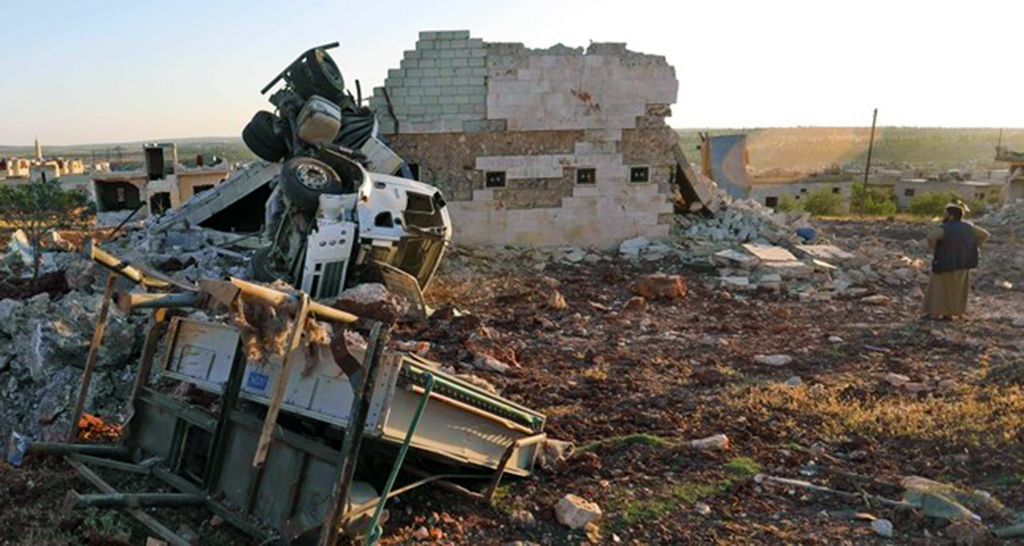 A man gazes at rubble and damaged vehicles following reported airstrikes by the Syrian regime in the town of Kafranbe, Idlib, Syria, May 20, 2019.

The recent escalation in Idlib and northern Hama is another test in Turkish-Russian cooperation and coordination in Syria. The tension in Idlib will affect more than 3 million Syrian civilians and may lead to another humanitarian catastrophe if it is not kept under control. Turkey is concerned about a new wave of refugees from the southern and central parts of Idlib. More than 300,000 civilians have already evacuated their homes to find shelter from the barrel bombs and shelling of regime forces. Hospitals and schools were also targeted in the recent regime offensive. Syrian regime forces and Russian military officials argue that those schools and hospitals are “gathering places for terrorists,” but no credible actor is buying their claims. International attention on Syria has been reduced since the defeat of Daesh, and the regime gained new ground isolating Idlib as the only remaining opposition-controlled area. The current situation gives some advantage to Syrian regime forces to push for a military solution for the ongoing civil war.

The U.S. and the other international actors are already busy with the current tension between Washington and Tehran. The regime wants to make use of the advantageous context to strengthen its position against the opposition.

Turkish and Russian defense ministers reached a deal on Sept. 17, 2018, in Sochi. According to the Sochi deal, a 20-kilometer demilitarized zone would be created in the area south of Turkey’s border with Syria. Free movement on the Aleppo-Latakia and Aleppo-Hama highways were the other essential articles of the agreement.

Turkish officials do not want to jeopardize relations with Moscow but are concerned that the Russian side is violating the terms of the Sochi deal. Russia also criticized Turkey for not being able to control the extremists attacking the Russian base in Hmeymin and other Russian military posts from the southern and western parts of Idlib.

There were more profound crises between Turkey and Russia earlier that were handled with the specific efforts of the leaders of both countries. There is trust between President Recep Tayyip Erdoğan and Russian President Vladimir Putin that allows the handling of crises between the two countries, but other officials from both sides are more skeptical about the cooperation of the two actors in Syria. With the recent escalation, regime forces once again pushed their limits, testing the strength of the Turkish-Russian agreement in Syria.

The Syrian regime wants to push the rebels further from Idlib, putting pressure on Turkey and also European powers. Strengthening its military position in the field in case there are political talks is the main aim of the Assad regime. By generating the threat of a new refugee flow, the regime also wants to prevent the possibility of intensified political pressure from Europe and the U.S.

Massive human rights violations and the war crimes committed by the regime have been documented. The New York Times report about the Assad regime’s inhumane use of prisons to systematically torture inmates and death chambers to suppress the opposition has increased the pressure on the Assad regime.

Washington also launched new allegations about the regime’s use of chemical weapons in a recent offensive. Many instances of war crimes and human rights violations have been documented by credible sources.

The regime has tried to break the political and legal pressure by increasing its violence against civilians and threatening to create another wave of migration from Idlib. Assad’s inhumane practices gave him some advantages in the past, but after the defeat of Daesh in Syria no international actor seems to be as sympathetic to him and his regime.

It is crucial for all responsible international actors to mitigate the current escalation in Idlib. Short-term gains of the regime in Syria may ruin Moscow’s credibility in the Syrian crisis. If Moscow can handle the political process in Syria successfully, this may turn into a significant international achievement for Putin.

To reach such an agreement, Moscow’s cooperation with Ankara and coordination with other international actors is crucial. It would be better for Moscow to turn the current situation in Syria into an internationally recognized political deal rather than another brutal victory for the Assad regime, which may further fuel extremism in Syria and elsewhere.

The 'second round effect' in Istanbul
Previous