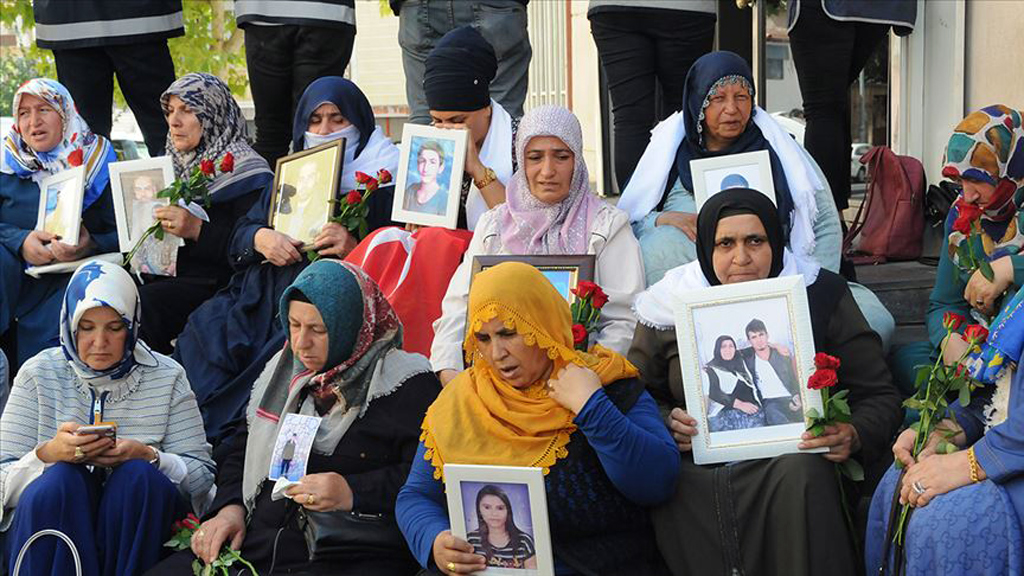 Families whose children were abducted by PKK terrorists hold a sit-in protest in front of the pro-PKK Peoples' Democratic Party (HDP) headquarters in Diyarbakır, Sept. 14, 2019.

Pressure on HDP good for Turkey and Kurds

Kurdish mothers are cursing the PKK, the HDP and their 'Kurdistan cause' today. History won't kindly judge any politician who fails to live up to their responsibilities.

The terrorist organization PKK targeted a group of civilians gathering firewood in southeastern Turkey on Friday. Following the deadly attack, which claimed at least seven lives, the police detained, among others, Kulp’s mayor and the local representative of the Peoples’ Democratic Party (HDP). The investigation was extended to the local municipality, as road work was being conducted on the day that the improvised explosive device (IED) exploded.

With Kurdish mothers still waiting outside the HDP’s headquarters in Diyarbakır to retrieve their children from the PKK, public pressure continues to mount on the HDP. At the same time, the PKK continues to escalate its violent campaign in a seeming attempt to shelter the HDP from criticism and prevent a potential ban on the party. Last but not least, the PKK wants to ensure that the 28 families, who jumped over the “wall of fear,” do not encourage others.

Such protests may not result in the PKK’s release of abducted Kurdish children. Earlier this month, PKK leader Murat Karayılan said, “No one will return, even if they sit there for a decade.” An HDP parliamentarian added that new recruits will continue to join “the guerrilla forces.” Yet, the Kurdish parents’ protest could encourage child soldiers to flee from their terrorist handlers. Going forward, HDP officials and other fronts for the PKK might find it more difficult to recruit Kurdish children. Perhaps some HDP politicians could prove willing and able to withstand the PKK’s pressure. Finally, the protest might lay the groundwork for a nonpartisan condemnation of terrorism on humanitarian grounds in Turkey.

The democratic pressure on the HDP, therefore, must continue. The Republican People’s Party (CHP) and the Good Party (İP), too, must set aside their short-term political interests and throw their weight behind the Kurdish mothers. All political parties must join forces to transfer condemnations of terrorism and the parents’ protest into public pressure. The HDP’s most recent efforts to raise that issue in Parliament within the framework of the Kurdish question merely aimed to ease that pressure – to save itself from further marginalization.

Pro-PKK circles describe the Kurdish mothers’ protest as a “state operation.” They have repeatedly used the same argument over the years to account for the lack of recruits from wealthy Kurdish families. It is hard to understand, however, why some reporters misrepresent the courage and determination of parents to see their children again as “a political operation against the HDP.” It is true that the dismissal of three mayors, like the ongoing sit-in, pushes the HDP to the corner. The party, however, faces public pressure to integrate into Turkey’s democratic system by distancing itself from the PKK – not closure. HDP politicians have not encountered such immense public pressure in years.

For the sake of the future of Turkey and its Kurds, the HDP must remain under scrutiny. We must draw a concrete line between the representation of ethnic demands in the political arena and support for violence. Both existing opposition parties and emerging movements, which look to court Kurdish voters, must acknowledge this necessity. We have a responsibility, as fellow human beings, to prevent the PKK from abducting children and forcing them to fight and die as pawns.

Kurdish mothers are cursing the PKK, the HDP and their “Kurdistan cause” today. History won’t kindly judge any politician who fails to live up to their responsibilities.