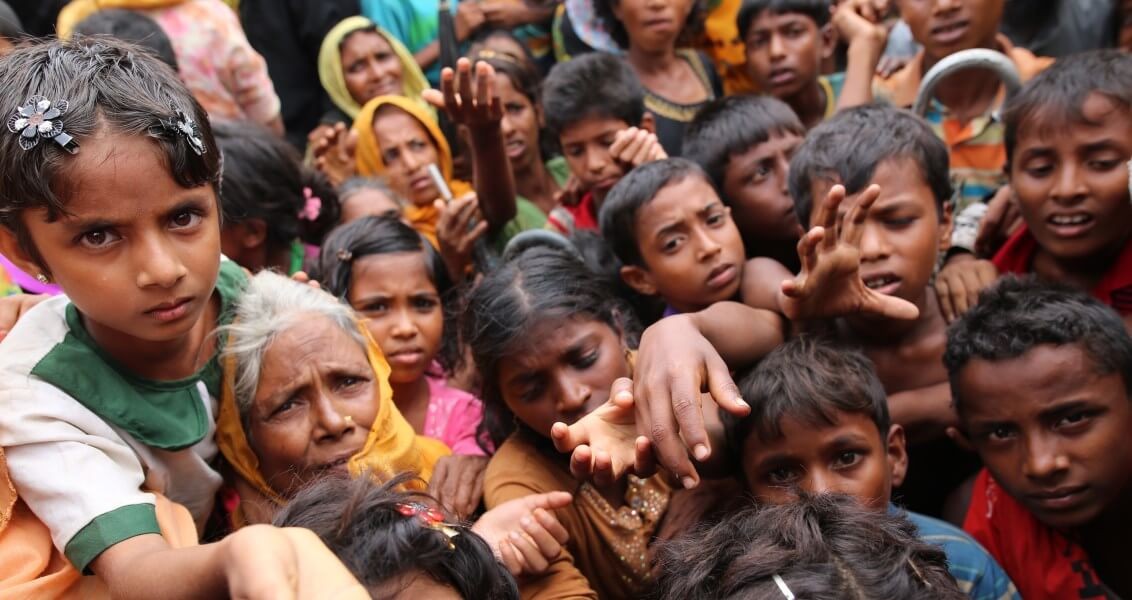 According to United Nations records, Rohingyas constitute the most persecuted minority in the world. Their persecution has continued almost uninterrupted for decades.

As Muslims around the world prepare to celebrate Eid al-Adha, the Muslim Rohingya minority community in Myanmar’s western Rakhine state is faced with the fact that their endless tragedy is reaching massive proportions. Certain international observers call ongoing organized state violence a secret genocide while others describe it as ethnic cleansing or disproportional response to insurgents. But whatever the term used and position taken, concrete developments and grave suffering is a disgrace for humanity.

In recent weeks, the systematic and organized destruction of hundreds of villages and settlements by paramilitary groups secretly supported by the Myanmar military and police, especially in the Fifth Quarter of the city of Maungdow, has extended the scope of the humanitarian disaster. Indiscriminate use of military force against civilians on the precept of occasional attacks by Rohingya rebels, including heavy machine guns and artillery, has displaced more than 20,000 people while around 3,000 innocent civilians have lost their lives across the region in a matter of five days.

The worsening tragedy attracted widespread global attention and responses came from the Organization of Islamic Cooperation (OIC) and President Recep Tayyip Erdoğan strongly condemning the violence and calling upon the Myanmar government to immediately restore peace and rule of law, allow displaced people back to their homes and enable humanitarian aid agencies entry to the worst affected areas. Britain has also called for an emergency session of the United Nations Security Council (UNSC), but no definitive decision was taken in the view of deep disagreements between the U.S., China and Russia on how to deal with the Myanmar administration.

Previously, the Advisory Commission on Rakhine State chaired by Kofi Annan indicated that greater efforts are needed by the government to prevent violence, maintain peace, foster reconciliation and offer a sense of hope to the long-suffering Rohingya population.

The plight of the Rohingya community constitutes a very complicated problem with its historical roots in the legacy of British colonialism and its present amid global power struggles in Southeast Asia. Following British annexation of Arakan state in 19th century, most Rohingyas migrated there from Bangladesh. But during independence in 1948, the state was allocated to Buddhist Myanmar rather than the Muslim eastern Pakistan – now Bangladesh – and since then, Rohingyas have always been seen as a national security threat by the Myanmar government. They were deprived of their citizenship rights as early as 1948, and lost their legal existence as an ethnic group in 1982.

According to United Nations records, Rohingyas constitute the most persecuted minority in the world. Their persecution has continued almost uninterrupted for decades, but the global public only became aware of when there was a sudden deterioration in widespread human suffering and violence. Although Muslims constitute 4 percent of Myanmar’s population of 60 million, since 1982, Rohingyas, as the largest Muslim group, are considered stateless, undocumented immigrants in their homeland. They have no citizenship, no registration or legal rights, no rights to ownership and no rights to marry or receive an education along with no resettlement options. So when they are attacked, persecuted or accused for domestic instability – as Myanmar’s authoritarian government frequently does, they are practically defenseless, because legally, they do not exist.

Systematic ethnic cleansing, pursued by the military regime since 2012, triggered a decline in the local population from 1.3 million to 800,000. It is estimated that around 100,000 civilians lost their lives and 400,000 were forced to migrate to neighboring countries, including Bangladesh, India, Thailand and Malaysia.

The plight of Rohingyas became a matter engulfed in global power struggles among the United States, Russia and China after 2004, when massive energy reserves were discovered in Rakhine state. China completed two geo-strategically important oil and natural gas pipelines in 2013 from Rakhine to its Yunnan province and gained the opportunity to bypass the busy Malacca Straits in its transport of energy resources from the Middle East. This territorial link to the Indian Ocean made Myanmar and Rakhine extremely valuable for Beijing in view of its global energy strategy.

Moscow is also aligned with Beijing in its support of the military regime in Myanmar against Western interference and diversification of energy routes. Therefore, China and Russia are likely to block any potential decision against Myanmar at the UNSC.

In return, the U.S. and Western media started to publicize the plight of Rohingyas and human rights violations in Myanmar in an effort to discredit the authoritarian regime of which Beijing as its most ardent supporter. But this support is only conjuncture and is not based on principles, as even the Nobel laureate Aung San Suu Kyi, the current state councilor of Myanmar, refuses to accept that Rohingyas are targeted in ethnic cleansing.

Unless there are radical changes in the balance of power among the relevant actors, the current crisis and suffering in Rakhine seems set to continue. Unless the core issues of citizenship, equality and justice are addressed, the crisis has the potential to undermine regional stability, not to mention the decay of brotherly consciousness among the ummah.

Everybody Knows Who Killed Whom
Previous

Does Erdoğan Have a Cool Job?
Next
Loading...
Loading...
We use cookies to ensure that we give you the best experience on our website. If you continue to use this site we will assume that you are happy with it.Ok