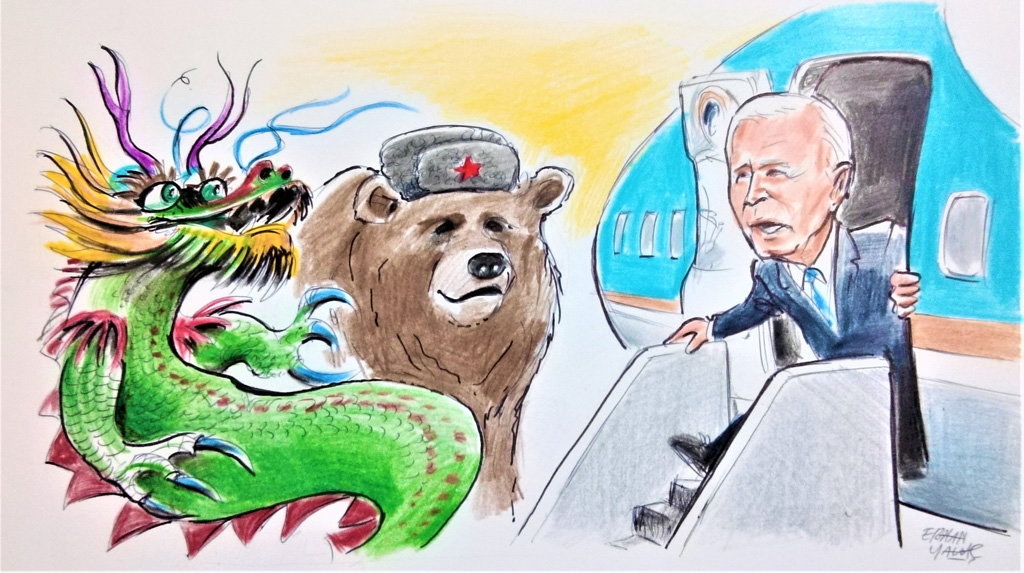 New US engagement with Middle East: Is it possible?

Under the current circumstances, it seems impossible for the U.S. to discover a new kind of engagement that would contain Russia and China in the Middle East as well as address Iran’s problems with Israel and the Gulf. It is highly likely that the fresh diplomatic efforts by Washington, which cannot even appreciate Türkiye’s balancing and stabilizing/securing role, will prove to be a complete waste of time.

The last three presidents of the United States – Barack Obama, Donald Trump and Joe Biden – promised a partial disengagement from the Middle East to focus their country’s attention on China. As a matter of fact, President Biden rushed to withdraw American troops from Afghanistan, handing over that country to the Taliban. Under his watch, Washington distanced itself from Saudi Arabia and the United Arab Emirates (UAE) and returned to nuclear talks with Iran. That change in U.S. policy encouraged the countries in the region to pursue normalization. Yet, the Russian invasion of Ukraine caused the region to regain importance in the world economy and for global stability. Accordingly, Biden spent three days in the region, on July 13-16, 2022, to reengage with the Middle East and to “strengthen America’s strategic partnership” with its allies. Having visited Israel and Palestine, the U.S. president met with Gulf leaders on Saturday in Saudi Arabia, which he had previously pledged to turn into a “pariah.”

Biden, whose party could lose the midterm elections in November due to the soaring cost of energy, hopes to persuade Saudi Arabia to increase its petroleum output. He was compelled to explain why he was going to Saudi Arabia in an opinion essay, where he argued that the Middle East mattered due to its waterways, to the global supply chain, and because it has energy resources. Stating that the region’s safety and integration could mitigate the global impact of the Russian invasion of Ukraine, Biden said that his visit aimed to “counter Russia’s aggression” and “outcompete China.” As such, Washington’s great power competition with Russia and China caused the U.S. to focus on the region once again.

It goes without saying that the top priority of any U.S. administration in the region is to strengthen Israel. The main purpose of last week’s visit by Biden, who once said that “you need not be a Jew to be a Zionist,” was to help Israel build “a new security and economic architecture” with other countries in the region. In other words, his goal was to facilitate normalization between Israel and Saudi Arabia, mount pressure on Iran’s nuclear program, and to unite the Gulf states under a common defense and security umbrella against Tehran.

It seems unlikely for the U.S. president to successfully bring together Israel and the Gulf states or the leaders of Egypt, Iraq and Jordan – who attended the meeting in Jeddah – in an anti-Iran bloc. After all, the frequent changes in Washington’s level of engagement with the region do not inspire confidence in regional players. Moreover, the Gulf states pursued a more autonomous policy in the wake of the Ukraine war. In addition to refusing to join sanctions, they opted to diversify their relationships with Russia and China.

Nor is it likely for Biden to forge an anti-Iran bloc – which the Trump administration could not achieve with the “orb” alliance. The Gulf states simply won’t risk normalization with Iran over Biden’s half-baked comments. Furthermore, the security umbrella, which Israel offers, cannot protect the Gulf from Iran or its proxies. There is a big difference between engaging certain Iranian targets and carrying out a regional war against Iran.

The U.S. may have discovered the region’s role as a “linchpin” of global politics once again, yet hardly anyone expects its new engagement with the Middle East to be particularly strong.

The Russian president, Vladimir Putin, too, takes a close interest in the region. He will meet President Recep Tayyip Erdoğan and the Iranian leader, Ebrahim Raisi, in Tehran tomorrow. It is noteworthy that the Russian leader will visit Iran’s capital shortly after the White House claimed that Tehran was going to deliver hundreds of unmanned aerial vehicles to Moscow and Joe Biden’s tour of the Middle East. It would not be surprising for Russia, which increased its regional influence, especially in Syria, to deepen its relationship with Iran and to became a facilitator between the Gulf and Iran.

As the Ukraine war drags on, Europe’s economic losses worsen, giving Russia more breathing room. Under the current circumstances, it seems impossible for the U.S. to discover a new kind of engagement that would contain Russia and China in the Middle East as well as address Iran’s problems with Israel and the Gulf. It is highly likely that the fresh diplomatic efforts by Washington, which cannot even appreciate Türkiye’s balancing and stabilizing/securing role, will prove to be a complete waste of time.

Türkiye’s Climate Policy: Aligned with International Climate Politics
Next
Loading...
Loading...
We use cookies to ensure that we give you the best experience on our website. If you continue to use this site we will assume that you are happy with it.Ok