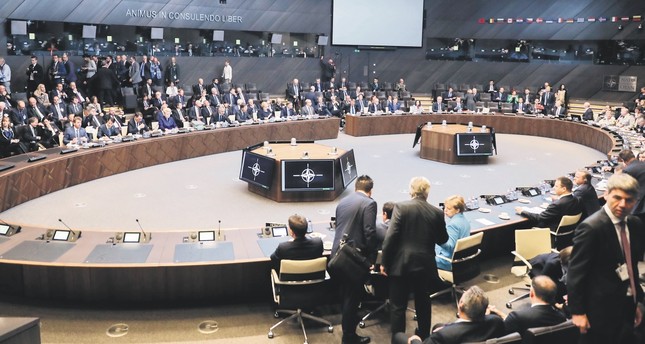 Heads of state and government with their delegations attend a working session during the summit at NATO headquarters, Brussels, July 11.

NATO is considered the most potent and successful military alliance in modern history. Every year, leaders of the NATO member countries meet in one of the member countries to discuss the critical issues and agenda items of the alliance.

NATO is considered the most potent and successful military alliance in modern history. Every year, leaders of the NATO member countries meet in one of the member countries to discuss the critical issues and agenda items of the alliance. This year, the leaders’ summit met in Brussels with some pessimism due to significant disagreements among the member countries. U.S. President Donald Trump’s criticism of some European countries and his initiation of trade wars with European economies was one of the catalysts of NATO skepticism and pessimism concerning the future of the transatlantic alliance.

The transatlantic alliance, which is at the core of NATO, is crumbling due to American President Donald Trump’s unwillingness to invest further in European security. European powers, on the other hand, are disturbed by Trump’s restrictive trade practices. It is still not clear whether the NATO allies will maintain their solidarity in the face of a significant threat. NATO’s Brussels summit was unable to clarify the primary concerns, and the allies were unable to hide their disagreements; therefore, the Brussels Summit cannot be considered a success story.The main problem with NATO is the diverging threat perceptions among the principal partners in the alliance.

The second issue, which also disturbs actors specifically like Turkey, is the ambiguity related to NATO members’ commitment to their obligations concerning their allies’ security. It is not clear for actors like Turkey or the Baltic states whether NATO member countries will be committed to their obligations to defend their allies in a situation of dire threat. For Trump, the focal problem is the material cost of defending Europe. Trump feels that the transatlantic alliance is not sustainable unless European actors increase their share in the defense budget of the alliance.

While European actors benefit from the NATO alliance as a collective good in maintaining their security, they are “free riders” regarding sharing the costs of defense investments according to Trump. Germany, especially with its massive trade surplus and productive economy, is a target for Trump’s criticisms. Those three problems need to be sorted out to strengthen cooperation among the members and to invest further in the security infrastructure of the alliance.

The U.S., Germany, the U.K., Turkey and France no longer have a similar list of threat perceptions. Soviet expansionism, the spread of communism and nuclear apocalypse are no longer shared threats that bring all these actors together. Trump does not consider Moscow as its archenemy or rival, whereas Turkey has started to see Moscow as one of its key partners regarding trade, tourism, and strategic infrastructure investments. Baltic states have a very skeptical perception of Russian military activism in the Baltic Sea and other surrounding regions. NATO member countries such as Italy, Hungary and Bulgaria, on the other hand, have warm relations with Moscow. Germany has long-standing strategic energy cooperation with Moscow. Britain had been confronting Moscow due to the Skripal Crisis, whereas the rift between Moscow and London seems to be much broader at the strategic level.

NATO needs more forces on the ground to counter-balance Russian influence over the Baltics, Poland and Eastern Europe, but the U.S. is not willing to invest more in European security. This means a fundamental investment in European troops for Washington. There is a need for more investment but mainly from the European side. Some countries prefer to deepen their ties and cooperation with Moscow rather than see Russian military presence as a strategic threat. NATO allies’ diverse perspectives concerning Russia, which used to be a shared threat in the past, is just one example that demonstrates the lack of consensus on threat perceptions. Views of the member countries concerning the terrorist threat, ethnic separatism and cyber-security are even more diverse. It is, therefore, challenging for NATO member countries to harmonize their medium-term agenda.

Shortsighted politicians in Europe do not shy away from making statements about their unwillingness to cooperate with Turkey if Turkey faces significant national security challenges. Many members of NATO still question to what extent their “allies” are willing to commit to their obligations about the fundamental national security issues they are facing. Turkey is not the only country that is frustrated about the uncooperative attitudes of its allies in its struggle against extremist terror networks. Almost all the member countries have their frustrations about the critical security issues that threaten themselves but are not taken seriously by the other allies. They try to invest in their stand-alone security concerns rather than contributing to common macro challenges. It is usually the U.S. that takes initiatives to address those significant problem areas on behalf of all of NATO. Within such an ambiguous context, all member countries try to focus on bilateral relations and maximize their core security and other security related interests on their own.

The U.S. no longer sees Moscow as an actor that may challenge its global supremacy. Moscow may eventually threaten European powers, but the major challenge for the U.S. is rising Chinese power. Today, the fast rise of China in the fields of economy and trade seem to be drivers of growth in the world economy. Washington expects that this economic and political growth may eventually have strategic and geopolitical consequences. The initial zone of confrontation seems to be the South China Sea, but if China feels more confident, this geopolitical confrontation may be extended to other domains as well.

The most likely zone for the next round of battle seems to be the Afghanistan-Pakistan region where Beijing makes strategic and military investments via Pakistan. China’s growth in economic and political fields may be quiet and peaceful, but Trump’s administration feels that if they cannot stop China now, it may be too late in the future. Washington thinks that European actors would either be too weak or unwilling to help the U.S. in counterbalancing the Chinese strategic challenge. Global trade wars are a strategy to confront China “peacefully,” but this confrontation also hurts the interests of Washington’s transatlantic partners. Washington feels that its allies will not be too helpful when confronting the threat of a more aggressive and more potent China in those regions.

NATO member states failed to reach a consensus on critical issues in the recent summit, but at least these issues were taken as priority agenda items at the leaders’ summit. New security issues like cybersecurity and migration were also discussed in the NATO’s leaders’ summit. None of the actors in NATO wants the alliance to be tested with a significant challenge in such a period of fragmentation and ambiguity.

Turkey's new Cabinet and the transformation of bureaucratic rule
Next
Loading...
Loading...
We use cookies to ensure that we give you the best experience on our website. If you continue to use this site we will assume that you are happy with it.Ok