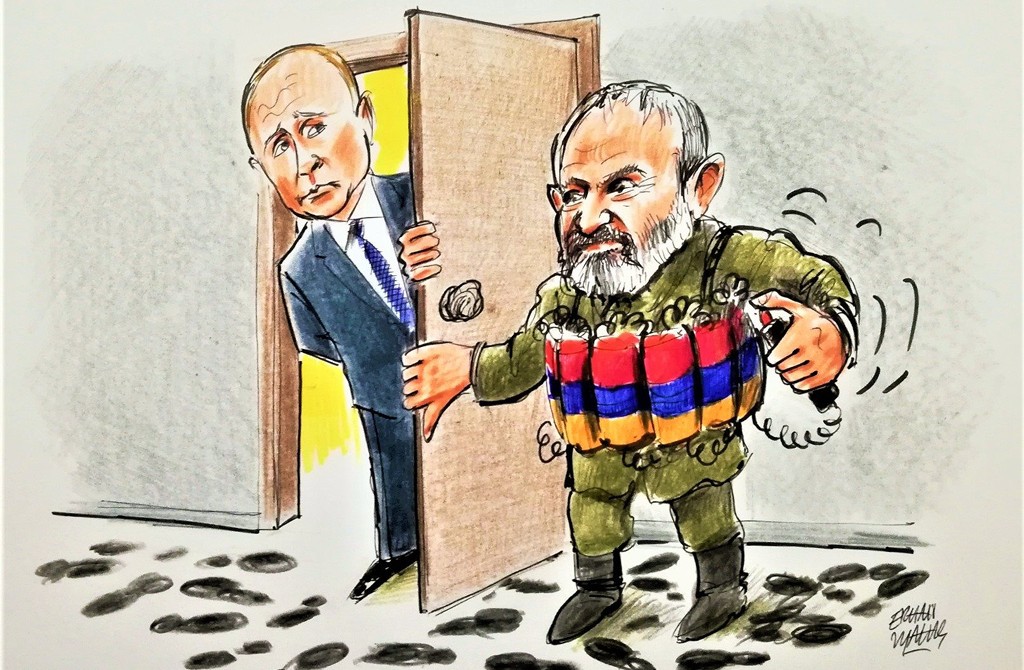 Nagorno-Karabakh: The next Syria in the Caucasus?

Pashinian threatened to turn Nagorno-Karabakh into the next Syria in order to fuel fears in Russia, Iran and Europe.

It was Washington’s turn to make a diplomatic move regarding the Nagorno-Karabakh conflict yesterday. Although Moscow initially stepped in to broker two cease-fires between Azerbaijan and Armenia, those pauses proved short-lived. Likewise, no one seriously expects U.S. Secretary of State Mike Pompeo’s meetings with the two foreign ministers to yield lasting results. One thing is clear: As Azerbaijan’s military liberates more villages from Armenian occupation every passing day, Armenian Prime Minister Nikol Pashinian continues to explore every avenue to save himself. One day, he talks about a war between rival civilizations. The following morning, we hear him denounce Russia and play the U.S. card. With the U.S. presidential election around the corner, Yerevan seeks to tap into the Armenian diaspora. At the same time, Pashinyan claims that there can be no diplomatic solution and says that Nagorno-Karabakh will be the next Syria.

Needless to say, Pashinian threatened to turn Nagorno-Karabakh into the next Syria in order to fuel fears in Russia, Iran and Europe. Having failed to turn the fighting in Nagorno-Karabakh into an all-out war between his country and Azerbaijan, the Armenian premier threatens the world with a war that could last for many years. Obviously, Russia does not want a prolonged conflict in the Caucasus, which would undermine its influence over the region and possibly lead to U.S. or NATO intervention. Tehran, in turn, would be more concerned than others in the case of prolonged fighting and a spread of violence, because it fears that the United States and Israel may attempt to carry out operations on Iranian soil through foreign fighters. Europe, which has been sidelined in a number of conflicts, including the Syrian civil war, cannot do more than settle for France’s statements and symbolic efforts.

Judging by the current situation in the Nagorno-Karabakh theater, Pashinian’s Armenia is in no shape to fight a prolonged war. At the same time, global and regional powers are experienced enough not to be dragged into another Syria-style conflict. What the Armenian premier really wants is to put an international force on the ground, so that his country won’t be forced to end its occupation of additional regions in Nagorno-Karabakh. He also hopes that the international community would be willing to recognize an independent state in the region.

Keeping in mind Russia’s strong influence over the Caucasus, it seems that Moscow is just letting Yerevan exhaust all options. In its own way, the Russians allow Pashinian’s Armenia to face the consequences of refusing to withdraw from five regions – as Moscow requested. At the end of the day, the Armenian military has been extremely unsuccessful. That won’t change despite shipments of heavy weapons from Moscow to Yerevan.

Azerbaijan, in contrast, appears to have made adequate preparations for an armed conflict in light of Armenia’s July 2020 attack on the strategically important Tovuz region. To make matters worse, Turkish and Israeli drones have dealt a heavy blow to the Armenian forces – which hurts the Russian defense industry’s reputation.

In light of those facts, Pashinian, having failed to get what he wanted from NATO and the United States, will eventually turn to Russia. His threat of creating the next Syria, however, isn’t just an admission of helplessness on Armenia’s part. It is also a reminder that Moscow must avoid a new and costly military adventure. Indeed, Russia is in no position to endorse Armenia’s refusal to withdraw from occupied Azerbaijani lands. Moscow and Baku, too, have mutual interests – which the former would not wish to undermine.

There is a new situation in the Caucasus now. Turkey’s support for Azerbaijan has the potential to challenge the balance of power in the region. Moscow’s traditional policy of keeping both Baku and Yerevan around is no longer meaningful. Azerbaijan has new strategic calculations and considerations as President Ilham Aliyev enjoys greater room to maneuver. Compared to 1992 or 2016, Baku has a stronger hand today.

Hence the Russian statement about Turkey’s potential involvement – if Yerevan and Baku sign off on it. Tehran, in turn, calls for a tripartite mechanism, à la Astana, involving Turkey, Russia and Iran. Due to uncertainty surrounding the upcoming election and its aftermath, what role the United States will play in this new balance of power remains unclear. It would be extremely surprising if an armed conflict in Russia’s sphere of influence would stop under pressure from the U.S. One would therefore expect Moscow to enter into negotiations with Ankara, as opposed to Washington, and mount pressure on Yerevan accordingly.

Wishful thinking and allegations instead of strategy
Previous

‘Regional consensus can drive peace in Afghanistan’
Next
Loading...
Loading...
We use cookies to ensure that we give you the best experience on our website. If you continue to use this site we will assume that you are happy with it.Ok