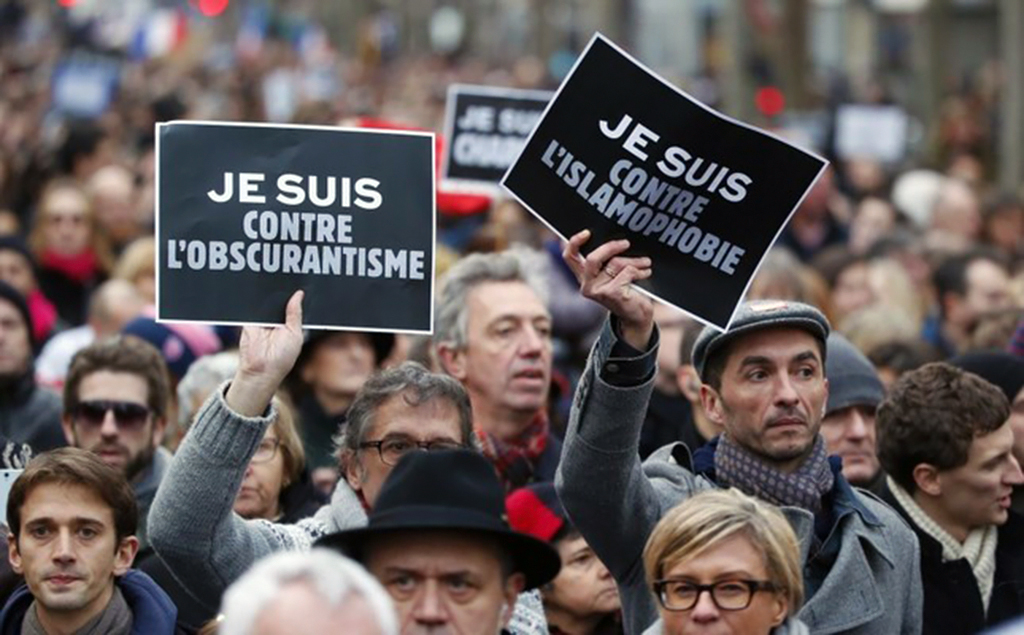 Demonstrators hold posters reading "I am against obscurantism" (L) and "I am against Islamophobia" during a march in Paris following a bloody attack by Daesh members in the French capital that killed 17, Jan. 11, 2015.

The escalating violence in French media continues to worsen every day. I am surprised that my fellow citizens are encouraging a possible civil war in France with calmness and serenity, as if it were a normal scenario we should anticipate in the short or long term.

The escalating violence in French media continues to worsen every day. I am surprised that my fellow citizens are encouraging a possible civil war in France with calmness and serenity, as if it were a normal scenario we should anticipate in the short or long term. How can it be? How can French people and intellectuals easily debate a “war against Islam” without feeling shame or sense any trouble? Yes, we are used to reoccurring debates about the “war on Islamic terror” and “assimilation problems” in French media, but now journalists and politicians are coldly discussing a “war against Islam” and a civil war. Their claim is explicit, straightforward and unequivocal: Islam and Muslims as a whole are a national threat, and France should tackle it.

On Sept. 15, the polemicist Eric Zemmour warned France of a coming “civil war against Islam and its French collaborators” on the public radio station France Inter. On Sept. 27, journalists Zineb El Rhazoui and Jean-Claude Dassier respectively claimed, “Women wearing headscarves belong to and manifest an ideology of radical Islam that leads to terrorism” and “we are in armed conflict against Islam,” on the popular C News TV channel. On Oct. 3, former French Interior Minister Gerard Collomb claimed in his resignation speech, “Today we live side-by-side … I am afraid that tomorrow we will live face-to-face,” portraying implicitly French Muslims and French non-Muslims as enemies. The list is desperately long, and we could find many more examples of such statements.

It seems that for those French journalists and demagogues, any display of affiliation to Islam, such as headscarves, halal food or prayers, constitutes a rejection of French values, isolation from the rest of the society and finally, a call for terror attacks. In other words, they intrinsically link the way of life of millions of French Muslims with the terrible terror attacks that took place in the last years in France. As a result, every Muslim has become the target, the national enemy, the impure and the ones we should neutralize.

How can we explain this dangerous semantic shift?

It is true that a far-right minority has always attributed all French problems to Arab or Muslim communities and advocated extreme solutions. Yet, open and blatant hate speech toward Muslims has become the new norm in mainstream media. One may argue that this semantic shift reflects the high degree of violence submerging French society after every Daesh terror attack. For sure, no one may euphemize the deep consequences of these terror attacks upon French society. They led to more resentment among French people in general and stigmatization of French Muslims in particular. On June 2018, French police even arrested 10 far-right members of a shadowy cell that plotted to attack Muslims, including attacks on veiled women, imams, mosques and halal grocery stores.

Yet, we should also recognize that hate speech against Islam and Muslims has deeper roots than Daesh attacks alone. There has been a structural approach to Islam since the colonization that systematically refers to Islam as inferior, barbaric and reactionary. We know for instance that French colonial authorities organized human zoos as well as anti-headscarf campaigns in North African colonies. Many sociological studies have already related the old French colonial policy of Islam and the post-colonial dispositive toward North African workers and families established in France. I mean, here a range of segregating discourses materialized in law, urbanism and symbols that led to relegate Muslim populations to subaltern jobs, to the city’s suburbs, to limited social rights and to poor civic participation.

These allusions to civil war not only represent the normalization of anti-Muslim discourse but also the legitimization of hate attacks toward individuals. These statements are irresponsible since similar rhetoric has led to mass deportation, massacres and genocides in the past. Is this really the alternative we want to oppose the Daesh threat? Is it not time to tackle French challenges through rational deliberation and thoughtful speech? Is it not time for all of us to be responsible?

In a period of economic and social crisis, it has become very difficult to advocate pragmatic and reasonable approaches. Yet, there are some facts no one can deny. There are around 6 million Muslims in France, most of them born and raised in the country; 6 million Muslims who work, study, vote and simply live in France. We have no choice but to live together, whether we like it or not. We have no choice but to find solutions to our common problems if we do not want to face the worst-case scenario. It is simple: There is no other plan but to renew respectful dialogue and common understanding; otherwise, we will be condemned to watch our society sink into the bloody abyss of hatred, just a few decades after the end of World War II and the Algerian War.

Let us learn from our history.

Syria and US credibility
Previous

Saudi Arabia is in big trouble
Next
Loading...
Loading...
We use cookies to ensure that we give you the best experience on our website. If you continue to use this site we will assume that you are happy with it.Ok