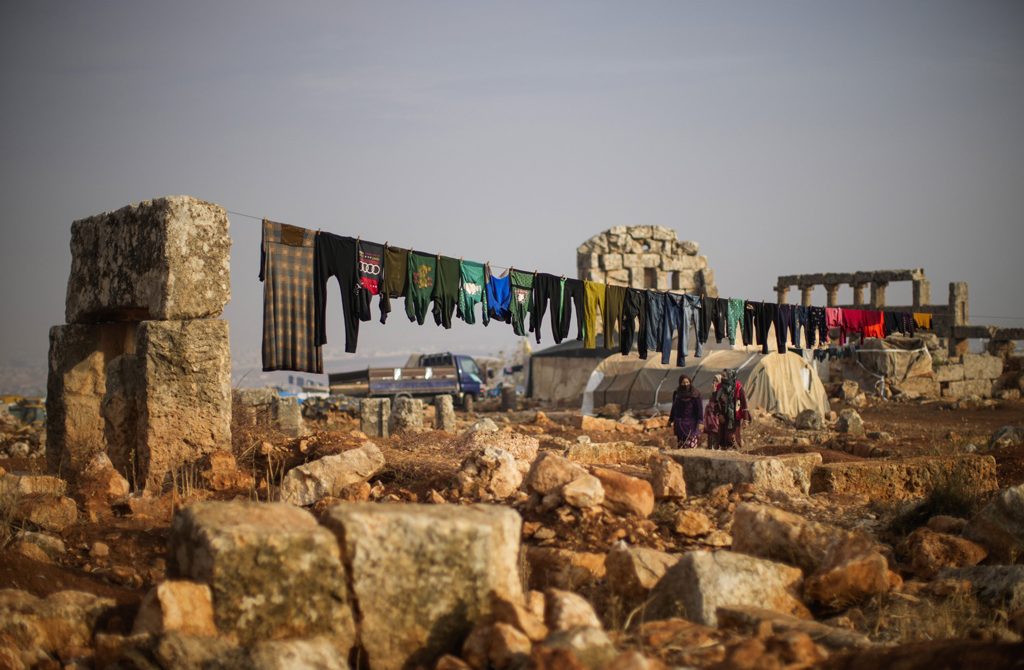 Displaced Syrian people walk next to ancient Roman-era ruins where they have set up their tents in the Sarmada district, north of Idlib city, Syria, Nov. 25, 2021. (AP Photo)

Ideological fight on refugees and their return

'The opposition has a democratic right to criticize the Turkish government’s refugee policy. That right, however, should be exercised without poisoning the country’s democratic culture'

Asylum-seekers and illegal migration are hot topics in Turkey and around the world. The discussion is evolving into a platform that has the most potential to influence Turkey’s democracy in the sense of identity and values. In this regard, it emerges as a factor shaping the popular base of all political parties in a negative sense, whether they govern or are in the opposition.

Refugees keep making headlines due to the continuation of the Syrian civil war, prolonged temporary protections, the challenges of integration, recent economic challenges, the opposition’s populism (which borders on racism) and acts of provocation by certain groups that fuel chaos in an attempt to strongarm the government ahead of next year’s election.

Indeed, approaching the question of asylum-seekers in an uncontrollable and reckless manner within the context of electioneering represents a grave danger. Our nation’s common sense, hospitality and humanitarianism are its greatest assets. Unfortunately, there is no saying whether the anti-refugee sentiment, which some have fueled in recent years, will or won’t generate racism or xenophobia in Turkey.

It goes without saying that Turkey needs to implement a stable repatriation policy in the medium to long-term. For the record, the government adopted a policy of voluntary repatriation back in 2017. Turkey’s three cross-border operations and its military footprint in Idlib not only aimed to combat terrorism but also sought to prevent the arrival of additional asylum-seekers and facilitate the departure of Syrians from Turkey to those safe zones.

In this regard, Turkey’s military interventions in Syria ensured that up to 4 million Syrians would stay within their country’s borders. Until the Bashar Assad regime creates a political atmosphere that will facilitate the return of Syrian nationals to their homes, Turkey should not be expected to withdraw from Syria’s territory.

At the same time, everyone knows how strongly President Recep Tayyip Erdoğan has advocated for the voluntary repatriation of Syrians in his addresses to the United Nations General Assembly (UNGA) and meetings with Western leaders. More recently, he unveiled the details of a new project that the government developed to facilitate the departure of a million asylum-seekers to the safe zones – on top of the 500,000 Syrians that have relocated there in recent years.

Any politician in their right mind knows that the asylum-seekers cannot be sent home instantly and forcibly. Such conduct would not reflect the state’s responsibility or comply with international law and humanitarian values. Managing the repatriation of asylum-seekers is an area where the government and the opposition must assume responsibility together.

Ahead of the 2023 elections, Turkey’s political parties should remove the repatriation of asylum-seekers from the domain of populism – as they removed the fight against terrorism. After all, the anti-refugee discourse, which certain fringe parties use today, threatens to take a racist turn and influence people from all social groups. That discourse has been turning into an exclusionary norm in its various manifestations, crudely or softly, among all groups, including journalists and academics. Failure to take necessary precautions may result in all political parties being besieged by the anti-refugee discourse. The international state of affairs, too, seems likely to promote such sentiment.

The new and aggressive strain of nationalism, which came to power in the United States under former U.S. President Donald Trump’s leadership and with the “America First” campaign, has not weakened. Quite the contrary, the pandemic and the Russian invasion of Ukraine have rendered it more permanent. The anti-refugee sentiment (and Islamophobia), which haunt the European far-right and far-left as well as the political center, remains the driving force behind racism. Even French President Emmanuel Macron, who just beat the far-right politician Marine Le Pen, has been dragged away from Europe’s world-famous liberal values. In truth, the refugee crisis alone was enough to demonstrate the collapse of Western values.

Obviously, the opposition has a democratic right to criticize the Turkish government’s refugee policy. That right, however, should be exercised without poisoning the country’s democratic culture with xenophobia. Nowadays, it is en vogue to criticize the discourse of fraternity between hosts and guests. However, the ruling Justice and Development Party’s (AK Party) policy toward asylum-seekers, which simultaneously pursued integration and repatriation, successfully prevented racism and xenophobia until now thanks to that discourse of “fraternity” and Erdoğan’s leadership.

The purpose of that policy is not to keep asylum-seekers in Turkey forever. Yet any policy that aims to facilitate voluntary repatriation must be well-planned and in line with common sense. Those folks, who talk about an “invasion” by asylum-seekers, undermine the common ground in Turkish politics. Sadly enough, it was the main opposition Republican People’s Party (CHP) and the Good Party (IP) that laid the groundwork for that discourse. The Democracy and Progress Party (DEVA), the Future Party (GP) and the Felicity Party (SP) cannot speak their minds either. Meanwhile, the Peoples’ Democratic Party (HDP) is unfamiliar with everything except an aggressive brand of nationalism tainted by separatism in the guise of leftism. While some left-leaning liberals vaguely criticize that attitude, they cannot seem to communicate in effective language.

To obstruct xenophobia and prevent any plans that fuel chaos and target our democracy, we need to get this ideological fight under control.

Turkiye, Pakistan need to ‘fortify bilateral relations’: Security dialogue
Next
Loading...
Loading...
We use cookies to ensure that we give you the best experience on our website. If you continue to use this site we will assume that you are happy with it.Ok