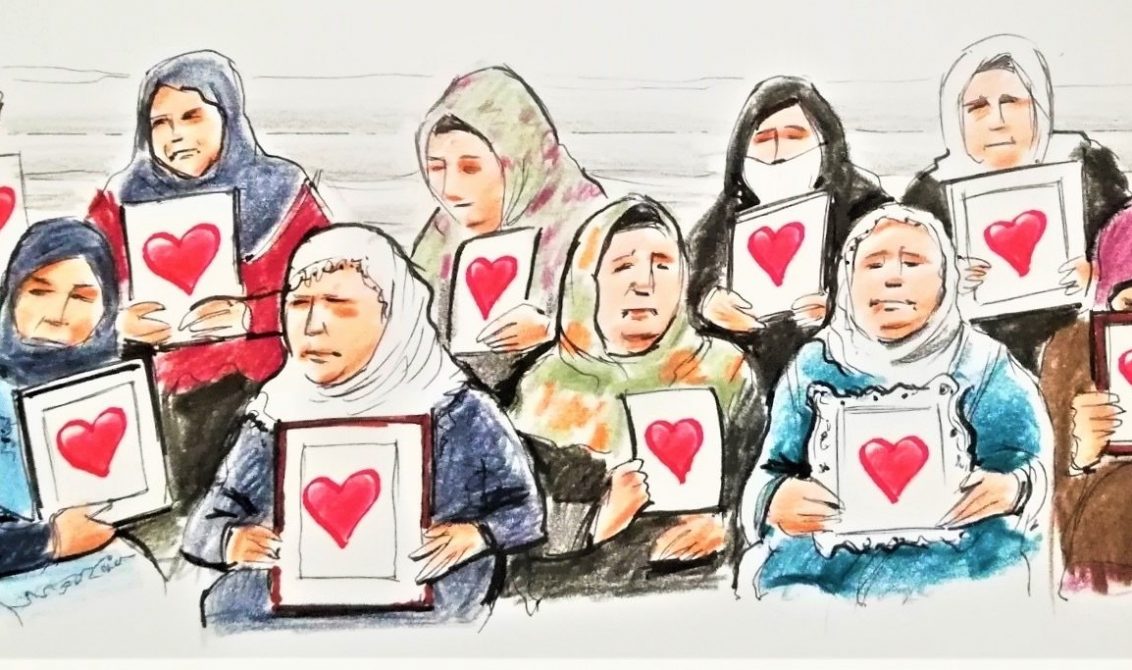 An illustration by Erhan Yalvaç shows mothers of those who have been abducted by the PKK terrorist organization protesting against the bloody group and its political wing Peoples' Democratic Party (HPD) in the southeastern province of Diyarbakır, Turkey.

Turkey just entered a period of renewed debate on the Kurdish question, when the way we talk about that issue, too, will be the subject of discussion.

President Recep Tayyip Erdoğan visited Diyarbakır on July 9 after two and a half years and tested out a new discourse – whose analysis I had to postpone due to the coup attempt’s fifth anniversary.

Let me begin by saying that Erdoğan essentially said the same things that he told the people of Diyarbakır back in 2005. That did not, however, mean that an early election or a new “peace process” was around the corner.

Instead, Erdoğan’s remarks provided insight into the upcoming debate on the closure case against the Peoples’ Democratic Party (HDP) and the Kurdish question.

What was the gist of Erdoğan’s 2005 address? That speech was about confronting past mistakes and addressing the Kurdish community’s problems through more democracy, citizenship, law and welfare.

He even had the courage to “swallow the hemlock poison” by sticking to the “peace process” – until the other side unilaterally derailed the talks with the encouragement of imperialists.

What did Erdoğan, who had been saying that there was no Kurdish question, hope to accomplish by bringing up his public statement from 2005 – when he acknowledged that problem?

From my perspective, those two discourses complement, rather than contradict, each other. Erdoğan’s rhetoric, in turn, hints at the Justice and Development Party (AK Party) government’s blend of counterterrorism and reformism. In other words, they are two sides of the same coin.

Essentially, Erdoğan recalled that he largely solved the Kurdish community’s problems through democratization and welfare.

In doing so, he shut the door on the maximalist demands of Kurdish nationalists, such as autonomy.

Again, the president notably stressed that “the other side” ended the peace process, accusing the HDP of harming the Kurds.

Going forward, Erdoğan will highlight the HDP’s marginality and warn against the mistake of supporting that party, by saying that those folks, who derailed the peace process, hurt the Kurds themselves.

In other words, Erdoğan’s new talking points are not about slowing down the fight against PKK terrorists or ending the HDP’s marginalization.

Quite the contrary, the new rhetoric contains various arguments designed to mount democratic pressure on the HDP.

Erdoğan criticizes the HDP for derailing the reconciliation process and its complicity in the PKK’s urban campaign in Turkey’s eastern and southeastern provinces.

As such, the president’s Diyarbakır address did not disturb the Nationalist Movement Party (MHP), which is part of the People’s Alliance, or its chairperson, Devlet Bahçeli.

Quite the contrary, Bahçeli, too, appreciates that the People’s Alliance cannot afford to surrender Kurdish voters to the pro-opposition Nation Alliance in 2023.

As such, Erdoğan’s unique blend allows the People’s Alliance to deliver warm messages to the Kurdish community and remains in line with the national security policy of the AK Party and the MHP.

Could the opposition benefit from Erdoğan’s most recent remarks in Diyarbakır, which endorsed the peace process? That is highly unlikely because the president continued to problematize any partnership with the HDP while talking about the Kurdish question.

That new approach, coupled with the closure case, will likely force the HDP leadership to go on the offensive.

Pervin Buldan, the HDP’s co-chair, demands the opposition stop treating her party as a “boogeyman” and expects active support from them against the backdrop of the closure case.

Furthermore, she wants the opposition parties to discuss the Kurdish question and to come up with concrete proposals.

By talking about the need for a new administration, inclusive of multiple HDP members, Buldan attempts to strengthen the movement’s hand in future negotiations.

Failure to comply, she warns, may encourage the HDP to explore a “third way” outside the Nation Alliance.

It seems that the HDP leadership will continue to demand to be in the “family picture” with the other opposition parties and to request a debate on potential ways to address the Kurdish question – which could make life difficult for the Republican People’s Party (CHP) and the Good Party (IP).

Those movements will find themselves stuck between Erdoğan’s new discourse and the HDP unless they prove willing to talk about autonomy or Kurdish-language education.

In other words, Erdoğan will be taking credit for reforms and the peace process, while the opposition leaders bring nothing to the table.

If the CHP’s Kemal Kılıçdaroğlu and IP’s Meral Akşener openly support the HDP, then Erdoğan will target them for collaborating with a political party that has never been interested in legitimate, democratic and legal politics.

Hence the main opposition party’s reluctance to share its report on the Kurdish question with the general public.

To summarize, Turkey just entered a period of renewed debate on the Kurdish question, when the way we talk about that issue, too, will be the subject of discussion.

The symbol of rebuilding the TRNC
Next
Loading...
Loading...
We use cookies to ensure that we give you the best experience on our website. If you continue to use this site we will assume that you are happy with it.Ok