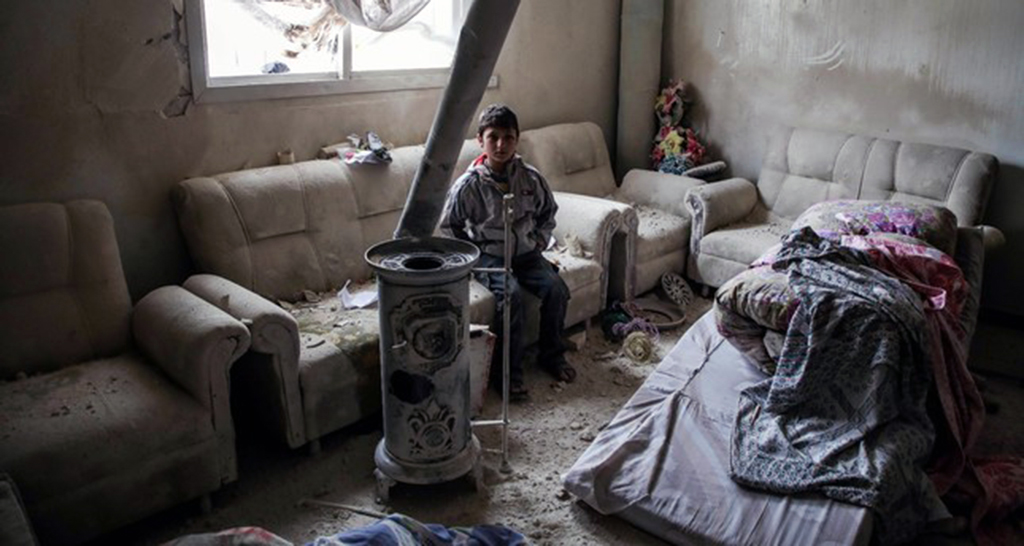 A Syrian boy sits inside a living room that was damaged by an airstrike in the opposition-held town of Orum al-Kubra, Aleppo, northern Syria, Jan. 5.

Better to lose the saddle than the horse: Trump’s Syria withdrawal

The U.S.' past is full of wrong decisions and miscalculated operations in Syria, but President Trump's withdrawal decision is obviously not one of them

On Dec. 19, U.S. President Donald Trump declared absolute victory over Daesh and publicly disclosed the withdrawal of American troops from Syria, which were initially sent there to fight against Daesh via the Global Coalition against Daesh. U.S. forces, however, made a controversial Marxist-Communist ally in the process, namely the Democratic Union Party (PYD), stirring up the conflict in northern part of the country and escalating tension with Turkey. Now that the U.S. is preparing for a well-conducted pullout that is likely to increase cooperation with Turkey, an anti-withdrawal camp is taking over Washington with gripping assumptions to reverse the course of the case in Syria.

Following Trump’s Twitter announcement, many have taken to speculating that his unsolicited decision to withdraw from Syria was a result of a phone call with President Recep Tayyip Erdoğan. In reality, however, Trump made it very clear that the U.S. was “knocking the hell out of Daesh” and would bring American troops home “very soon” at an event held in Ohio on March 29 – back when Turkish-American relations were going downhill. Now, due to a few recent promising steps toward rapprochement between Ankara and Washington, it does not make much sense to tie the withdrawal decision to a single phone call, mainly because Turkey has long been pushing the U.S. to reconsider its pro-PYD strategy in Syria, and never really succeeded before.

Whether we praise or disapprove of Trump, his withdrawal decision has factual and realistic ground, one that complies with international law. Organizing one terrorist group to fight against another, at the expense of a failed state’s territorial integrity and hindering a 67-year-old NATO alliance, is by far the worst counterterrorism strategy the U.S. has relied on in the Middle East. While many in American bureaucracy condemn Trump’s withdrawal decision with the claim that the U.S. is leaving allies, mainly the PYD, behind, it must be kept in mind that Congress has never really approved this involvement in the first place, and it is illegal. The U.S. involvement in Syria solely aimed to defeat Daesh, not to “protect Kurds” or help them cede territory from Syria for the PYD. A particular camp in American politics, currently seeming to be led by Sen. Lindsey Graham, should consider the NATO allies and partners the U.S. has already upset first instead of shedding tears for the PYD, a group with organic ties to the PKK – a terrorist organization recognized as such by the U.S. After all, U.S. cooperation with the PYD is an unconventional partnership, and the PYD fought against Daesh for no one but its own agenda. In fact, for the U.S., the PYD constituted nothing more than a mere instrument that could easily be mobilized against Daesh and Iran.The horrible fact

Those who are concerned about the so-called humanitarian consequences of an American military withdrawal should check their facts first. Take Mosul and Raqqa for instance, where the U.S.-led coalition conducted numerous airstrikes against Daesh resulting in a terrifying death toll of approximately 5,000 civilians, which is almost the same as the total number of civilians killed by Daesh since 2011.It should be noted that official coalition reports often undermine the scale of the humanitarian disaster, and the exact number of civilian deaths might actually be much higher. So to speak, the U.S. presence in Syria has not done anything to truly protect anyone, but instead has caused a great deal of destruction and turned a blind eye to those who really need help and support, including over 300,000 Syrian Kurds who have fled from Daesh’s violence and PYD oppression to Turkey and northern Iraq. Hence, it is debatable whether the U.S. intervention has been grounded on humanitarian concerns.Today, even if Daesh is not completely defeated and still poses a threat, keeping American troops in Syria will not bring an ultimate solution to this terrorist group, mainly because violent ideologies as such demand profound long-term political solutions. If worse comes to worst, the U.S. is still perfectly capable of conducting airstrikes through its bases located in Iraq and carrying out the fight via the Global Coalition against Daesh.

Another popular assumption is that Russia and Iran will quickly fill the vacuum created by an American withdrawal, which is misguided on multiple levels since the U.S. is by no means capable of forcing Russia out of the equation or containing Iranian influence in the region. As put forth by former Secretary of Defense Chuck Hagel, with only 2,000 troops on the ground, it is folly for the U.S. to think that it can force Iran, Syria or Russia to do anything.

Technically speaking, Trump cannot simply be handing Syria over to Russia by withdrawing troops since the U.S. never really had Syria in the first place. Syria has traditionally been a Russian ally and had a foothold in the Mediterranean.

When it comes to growing Iranian influence in northwestern Syria, it is possible to argue that the U.S. is still a significant actor for having bases in close proximity to the country and can continue its efforts to contain Iran. Moreover, Iran currently lacks the economic sources it was once able to pour into local proxies, and when making such assumptions, the hardships of furthering foreign policy goals via proxies with varying agendas in Syria must be acknowledged, as well.

The likelihood of increased cooperation between Ankara and Washington will potentially discouraging Iranian ambitions. As Turkey and the U.S. share common motivation in terms of containing the Iranian influence in Syria, Turkish-American cooperation can prove much more influential in this

regard than a mere American presence to limit a single power from dominating the area. America is marked due to its never-ending engagements in the Middle East and not held in high-esteem by the public. Turkey, a long-time American ally, on the other hand, is a regional actor with cultural, religious and historical ties to the denizens of the region, which are majority Sunni Arabs.

For some, the withdrawal is bad policy because Trump’s move resembles former President Barack Obama’s withdrawal from Iraq. Yet, before we simply compare Iraq in 2011 to Syria in 2019, one should keep in mind the similarities and differences. In Iraq, the U.S. invaded the whole country, changed its regime and formed a new government with around 170,000 troops, while paying little attention to the demographic complexities of the nation-state. The U.S. was still the most capable and perhaps the only stable force in Iraq when it withdrew in 2011. As a result, the American withdrawal from Iraq directly contributed to the emergence of an environment where Daesh was able to rise. In Syria, however, there are multiple state actors, and dozens of nonstate actors with varying degrees of power. The U.S.’ only nonstate ally, the PYD, is one that has no other friends in the country and is a potential problem for all the nation-states in the region. An American withdrawal from Syria cannot possibly create the same effects in the region. Therefore, drawing misevaluated analogies between Iraq and Syria regarding the withdrawal decision generates false conclusions.

The Turkish goal in Syria

Turkey’s premier objective in Syria is to protect Syrian territorial integrity and to ensure the safe return of 3.5 million refugees residing on Turkish soil while facilitating the stabilization process in close cooperation with the majority Arab population. The previous U.S. strategy enabled the PYD to gain power and significance. The PYD’s territorial ambitions and a consequent disintegration of the already fragile country would bring even more instability to the region and encourage more groups like Daesh. For this reason, the U.S. withdrawal represents a strategic shift rather than a mere tactical decision. It is a grounded realignment with Turkey, which indeed contributes to the stability of the region.

The U.S. made a series of bad choices regarding Syria, but the withdrawal decision is not one of them. Trump must have realized, in the end, it is better to lose the saddle than the horse.

Turkey will shoulder the 'heavy burden' of ending terror in Syria - Erdogan
Next
Loading...
Loading...
We use cookies to ensure that we give you the best experience on our website. If you continue to use this site we will assume that you are happy with it.Ok