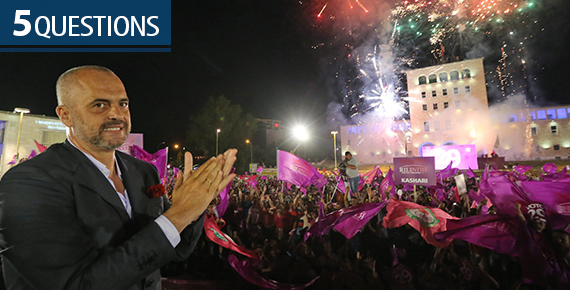 The votes to the Alliance for Employment, Prosperity and Integration led by the Democratic Party (DP) of Albania remaining around 40 percent mean that the 2-term PD ruling is soon to end in the country.

Albanians headed to the ballot box on June 23, 2013. So far, 98 percent of the votes are counted. The Alliance for a European Albania led by the Socialist Party (PS) is ahead in the elections, winning 60 percent of votes for now. Although the final results are not announced yet, the votes of the Alliance for Employment, Prosperity and Integration led by the PD remain around 40 percent and that tells that the 2-term PD ruling in Albania is about to end.

1. Who are the main actors of the elections? What are their political positions?

Although a total of 66 political parties joined the elections, the race took place between two main blocks led by two big parties. The block under the Democrats’ leadership consisted of 25 opposed to 37 parties of a broad-based election coalition led by the Socialists. In addition, there were four small parties and three independent candidates that joined the race.

Since Albania has adopted the multi-party system in 1991, a cut-throat competition continues between Democrats and Socialists. The margin of voting ratios is quite narrow, so the country is split into two politically. The center-right Democratic Party as the first opposition party established against the Labor Party following the line of Enver Hodja, in a way symbolizes the democratic change in the country. The PD led by Sali Berisha has been in the government since 2005. Berisha who served as the president of Albania previously is a veteran politician. He has created a leadership image with his populist and sometimes nationalist policies and high popularity not only for the Albanians in the country but also for the Albanians living in the neighboring countries. The SP under the leadership of the former Mayor of Tiran, Edi Rama, is a continuation of the Labor Party but adopts a social democrat view. The image of Rama is quite positive due to his successful political past and less suspicious political nature compared to Berisha.

Another party that should be mentioned other than these two is the Socialist Movement for Integration (LSI) with its key position. The LSI led by Ilir Meta separated from the PS in 2004 and joined the PD coalition. The LSI determined the fate of the elections by departing from the coalition in April and joining an alliance together with the PS.

2. How was the election atmosphere?

Elections in Albania have always been controversial, full of stress and even fights since 1991. International observers following the previous elections were underlining that the parties were not acting in full cooperation with law, neither were they acting responsibly. Prior to the last elections, there were rumors about election fraud. Since the margin of votes between the two big parties was significantly narrow last time, the competition was at the highest level. The PS in particular fiercely accused the PD in the government of bribery and corruption.

As the election time approached, the tension escalated. The LSI in partnership with the government announced to act together with the opposition, and Prime Minister Berisha dismissed the LSI member in the Central Election Committee. The opposition leader Rama, in return, withdrew the representatives of his party from the committee; therefore, not leaving any member of the opposition behind. Supporters of the two parties were engaged in fights, even causing injuries in various cities.

The international media paid a great deal of attention to the Albanian elections because one of the accession conditions for Albania to join the European Union is the conduct of elections in accordance with international standards. About 500 observers were sent to Albania to cover the elections. Due to the lack of trust among parties, about 8000 Albanian observers followed the elections.

As the polls were held under these circumstances, an opposition representative died in a fight with a PD candidate in the city of Laci. Besides, some people were caught for distributing money in envelopes to voters in some cities. Desp