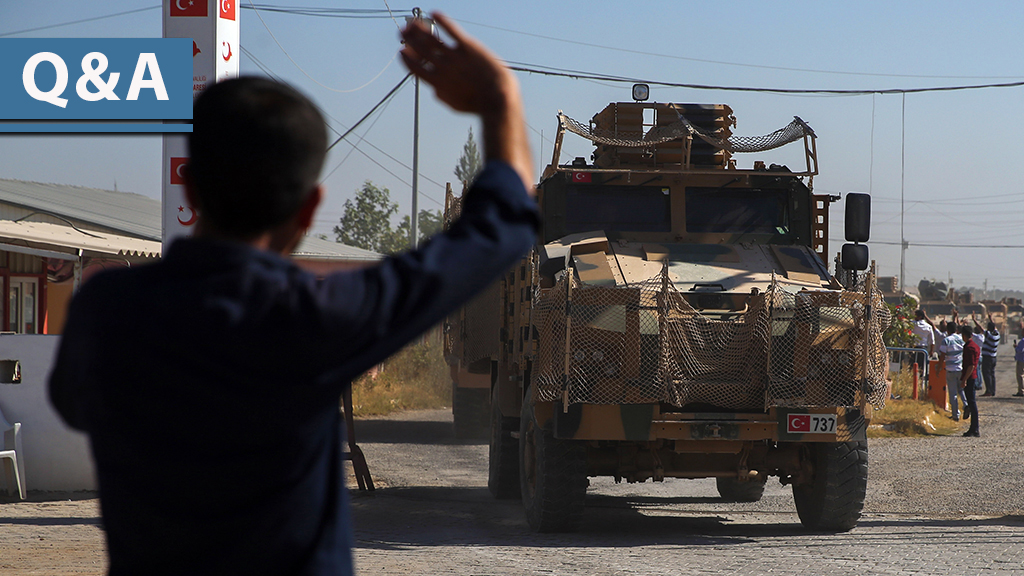 Operation Peace Spring is being carried out for two main objectives. The first is the eradication of the terrorist organizations PKK/KCK/PYD/YPG and DAESH which constitute threats to Turkey’s national security. The second objective is ensuring the safe return to their homes of the Syrian asylum seekers who came to Turkey due to the civil war, and providing humane standards of living for them in their country. As a result of Operation Peace Spring, Turkey will eradicate a major geopolitical threat and will provide the ground for about one million refugees to return to their homes safely.

Operation Peace Spring is the third in a series of cross-border Turkish military operations in northern Syria, following from Operation Olive Branch and Operation Euphrates Shield. The operation is being carried out in accordance with the right to self-defense recognized by Article 51 of the UN Convention and the UN Security Council’s Resolutions on the fight against terrorism. The operation is mainly targeting the PKK/KCK/PYD-YPG and certain terrorist groups related to them and to DAESH. The active terrorist organizations located east of Euphrates are Turkey’s targets. The fact that the military operation started against Tel Abyad and Ras al-Ayn puts eradicating the terrorist organizations between these two areas -approximately 120 km – on the agenda. The M-4 Highway stands out as the border determining the depth of the operation. Operation Peace Spring is only targeting terrorist organizations in that area. The necessary sensitivity is being shown by both political decision-makers and the executive military authorities to prevent any damage to civilians, tourist sites, and historical buildings. Presenting the operation as a “Turkish-Kurdish war” is an unjust accusation that targets not only Turkey but also the region’s peace and tranquility.

The elimination strategy of the terrorist organization DAESH with the help of the PKK/PYD, despite different concrete proposals by Turkey, has been a major security threat for the country. The PYD-YPG has become a national security threat to Turkey because of the fact that the PYD-YPG gains de facto field control in Syria, finances itself by using oil resources, while heavy arms and logistical support are provided to them by the United States. Using different names for this organization does not change the facts. Moreover, U.S. President Trump and the U.S. National Intelligence director have explicitly cited the PYD as the Syrian branch of the PKK. Despite the eradication of DAESH, the continuation of support to the PKK/PYD/YPG has become unacceptable for Turkey. Turkey, prior to the military operation, has made all the necessary diplomatic contacts to solve the problem in cooperation with actors such as European countries, Russia, and Iran, and particularly the United States, and has offered concrete proposals. However, these actors’ approaches to the issues of terrorist organizations in Syria such as DAESH, the PKK, and the YPG, and refugees have been far from meeting Turkey’s concerns. The underestimation by the U.S. and European countries of the importance of these topics, which have become a matter of national security for Turkey, brought Turkey to the point of taking the initiative. Turkey’s preparations and coercive diplomacy, which the country practices in a stable manner, resulted in the withdrawal of the United States’ military component from the border. Operation Peace Spring, within this framework, started on October 9 at 16:00 following the instruction of President Recep Tayyip Erdoğan, after the completion of the necessary preparations.

The Turkish Armed Forces have planned and are performing this operation. Free Syrian Army elements are also expected to participate in the operation, which is sponsored by Turkey, as was the case in the Operations Euphrates Shield and Olive Branch. The operational process started with air bombing of the points identified during the preparation phase and continued with shots from howitzers. As a result of the process being carried out quickly, the ground troops entered the area on the same day and launched a sweep operation against terrorist threats.

The United States was Turkey’s main interlocutor in the commencement of operations and the process of execution. Conflicting statements from U.S. officials are distracting for Turkey and the international public opinion. The points of fundamental importance for Turkey are that it has reached an agreement with the U.S., and that the United States’ military components are withdrawn from the area of operation.

Moreover, Turkey has made the necessary diplomatic notification to Iran, along with the member states of UNSC, NATO, and the UN Secretary-General. Spain has given open support, while NATO declared that it takes Turkey’s security concerns into account. Russia has also announced its support within the framework of the territorial integrity of Syria. Turkey is waiting for its allies to support in word the operation – not to react against it. The operation begins the process for a solution to the issues of the presence of terrorist organizations and refugees in Turkey, which have become pressing issues of national security. The provision of support to Turkey is dictated under the NATO institutional support framework and by Turkey’s alliances with many of these countries under the NATO umbrella. Meanwhile, the threatening statements that have been made from the moment the operation commenced have no deterrent effect on Turkey and will not affect the process of Turkey’s operation.

Western media launches its propaganda machine before Turkey’s operation
Next
Loading...
Loading...
We use cookies to ensure that we give you the best experience on our website. If you continue to use this site we will assume that you are happy with it.Ok