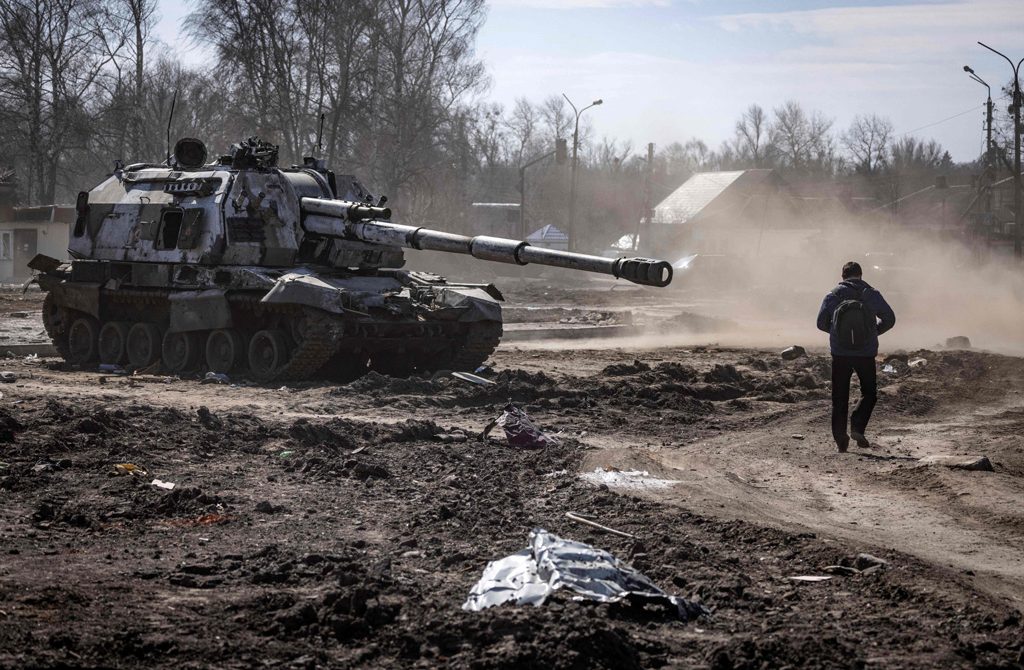 A resident walks near a damaged Russian tank in the northeastern city of Trostianets, Ukraine, March 29, 2022. (AFP Photo)

Regardless of the outcome of the talks, Europe won’t forget the Russian threat and Russia can no longer avoid being isolated from the Western-centered global economic system

Representatives from the Russian Federation and Ukraine met in Istanbul on March 29. That meeting represented a new stage in Turkey’s push to mediate peace talks after bringing together the two foreign ministers at the Antalya Diplomacy Forum. At the same time, the new round of talks reflected President Recep Tayyip Erdoğan’s calls urging his Russian counterpart, Vladimir Putin, to consider a cease-fire. Indeed, as the world shows its appreciation for Ankara’s policy, Moscow followed in Kyiv’s footsteps to agree to a meeting in Istanbul – which clearly demonstrates that the country’s diplomatic initiative has yielded results. Over the next weeks, governments around the world will keep their eyes on the peace talks in Istanbul.

There are, however, certain tough questions that need to be answered: Since the negotiations in Belarus hit an impasse, will the talks in Istanbul facilitate a cease-fire or peace? Could Moscow, which declared that it had “completed the first stage of (its) special military operation,” resort to stalling tactics and try to win some time? Or will Russian President Vladimir Putin take the “honorable exit” President Erdoğan proposed and end this war? It is hard to make any predictions at this time. What we already know is that Ukrainian President Volodymyr Zelenskyy has agreed to neutrality, not pursuing NATO membership and terminating the development of nuclear weapons. Meanwhile, the Kremlin will not push for a “regime change” in Ukraine. The sticking point, however, includes the status of Crimea and Donbass. Since Zelenskyy cannot give up on his country’s territorial integrity and Putin cannot give up Crimea, the talks will focus on the Donbass region.

The first month of fighting has shown that a prolonged war does not serve Russia’s interests. It is true that Ukrainian cities have been destroyed, millions have been displaced and civilian casualties keep rising. Yet the United States and the European Union will continue their military assistance as long as the Ukrainians keep fighting. At the same time, the U.S., the EU and NATO have achieved internal consolidation in the face of the Russian threat. Russia’s isolation, in turn, keeps deepening. U.S. President Joe Biden’s distinction between Putin and the Russian people, coupled with his (retroactively corrected) remarks on the Russian president, suggest that Washington subscribes to a long-term policy of weakening Russia. The U.S. should be expected to pursue that goal as long as it doesn’t further strengthen China’s hand. After all, Russian weakness in Central Asia, the Middle East and Africa tend to entail the growth of Chinese influence.

Putin could still buy some time, seeing that hardly anyone except the U.S. and the EU supports economic sanctions. Many heavyweights, including China and India, either oppose sanctions or comply with them only on paper. As a matter of fact, U.S. allies in the Middle East (with the notable exceptions of Qatar and Kuwait) have assumed a mildly pro-Russian stance. That could be an attempt to signal their dissatisfaction with the Biden administration or a reflection of their assessment that Russia will play a more permanent role in the region. Despite all those developments, Putin would be making a big mistake if he chooses to prolong the war in Ukraine. It is abundantly clear that the country is morphing into “Europe’s Afghanistan” – a place that could consume Russia in many ways. Having failed to anticipate the duration of that war and the Western reaction, it remains to be seen when Vladimir Putin will decide to stop.

Obviously, one would hope that the negotiations in Istanbul lead to a cease-fire and, ultimately, peace. The two presidents, Putin and Zelenskyy, have undoubtedly difficult decisions to make. Where Putin and his team stand, however, will determine the conflict’s future course. More questions to be answered: What does the second stage of Moscow’s plan involve? Will the Russians deepen their occupation with fresh military moves like heavy bombardment and tank operations in besieged towns? Or will they focus on Donbass in an attempt to reach their goals at the negotiating table? Certainly, Erdoğan’s recommendations could guide the Kremlin toward an honorable exit.

Regardless of its outcome, the Russia-Ukraine war has established two facts: First, Europe won’t forget the Russian threat and cannot refrain from building a new security architecture. Secondly, Putin’s Russia can no longer avoid being isolated from the Western-centered global economic system. As such, it will pursue certain radical agendas, such as using its national currency in international trade, to change that system.

Ukraine crisis and the leadership debate in Europe
Previous

The West must support Turkiye's Ukraine diplomacy
Next
Loading...
Loading...
We use cookies to ensure that we give you the best experience on our website. If you continue to use this site we will assume that you are happy with it.Ok