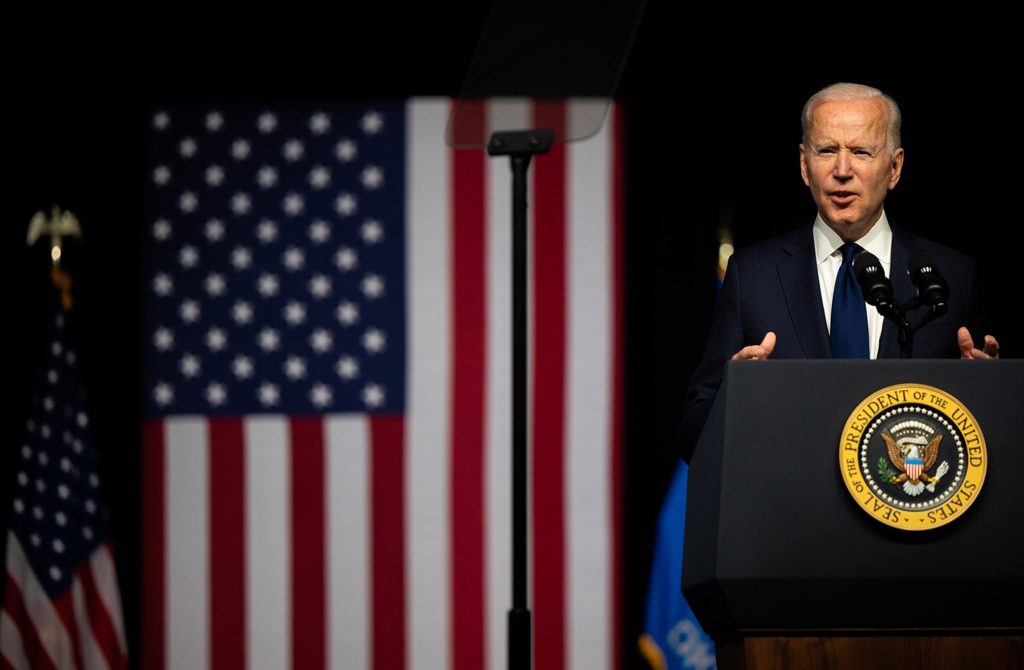 While determining its foreign policy, the U.S. has a major responsibility to please its own nation. The latest polls show that American citizens demand security and to put an end to the spread of arms overseas

Since the inauguration of U.S. President Joe Biden, there have been debates about the priorities of the new administration during its tenure.

In January 2021, the U.S. experienced multiple crises including a global pandemic, emerging economic recession and deepening social and political polarization. Additionally, it was also in the midst of a period of turbulence in its relations with countries around the world.

There was a trade war with China, cyberattacks and election interference rumors in regard to Russia and most significantly, there was a crisis of confidence and trust in relations with allies.

Losing the support of the public in regard to a foreign policy matter would not only weaken the administration internationally but would also create a significant point of opposition in a highly polarized society.

Because of that, the members of the administration made sure that the public would endorse all of its foreign policy actions. In his first-ever remarks to State Department staff, U.S. Secretary of State Antony Blinken asserted that he will take into account the interests and wellbeing of the American people in every step of the foreign policy decision-making process.

Blinken said: “The American people are watching the U.S., too. They want to see that we’re safeguarding their wellbeing, that we care about their interests, that our foreign policy is about them and their lives. We will do right by them – by pursuing a foreign policy that delivers real benefits to American families, protects their safety, advances their opportunities, honors their values, and leaves their children and grandchildren a healthier and more peaceful world.”

Later in several other speeches and documents, this issue was raised by the Biden administration.

The question is what do Americans expect from the administration in terms of foreign policy? Over the last several months, different institutions and public opinion companies conducted surveys about the priorities of the American people in regard to foreign policy agenda items.

Another survey that was released three months after the aforementioned research provided a slightly different set of priorities. According to this poll, the top 10 priorities include:

These two surveys demonstrate a few points about the foreign policy priorities of the American people. First of all, it is clear that the economy and American jobs are the American public’s most significant priority.

It is not a coincidence that during the announcement of the Interim Strategic Guidance, Blinken asserted that the top priority of the administration will be for America’s foreign policy to serve the needs and fulfill the aspirations of the American people.

“We’ve set the foreign policy priorities for the Biden administration by asking a few simple questions: What will our foreign policy mean for American workers and their families? What do we need to do around the world to make the U.S. stronger here at home?” Blinken said.

This shows that the administration will try to keep this issue in mind while executing its foreign policy.

Secondly, the polls show that two significant security issues, including terrorism and weapons of mass destruction, are still considered top foreign policy issues in the eyes of the American public.

Similarly, two rivals, China and Russia, are believed to constitute a threat by the American people.

Thirdly, the results show that global warming and climate change are becoming a foreign policy priority for the American people.

A person sits in Delores Park as smoke and fog hang over the skyline in San Francisco, California, U.S., Sept. 9, 2020. (Photo by Getty Imates)

Although there is probably a partisan divide about this, it is still important to see climate issues on the list of priorities.

More significantly, it will be important to see if it can generate a set of bipartisan policies addressing these matters that the American people consider to be priorities. It will be probably the most important test of the U.S. administration.

Saudi-Iran duet: Will peace never come to Yemen?
Next
Loading...
Loading...
We use cookies to ensure that we give you the best experience on our website. If you continue to use this site we will assume that you are happy with it.Ok