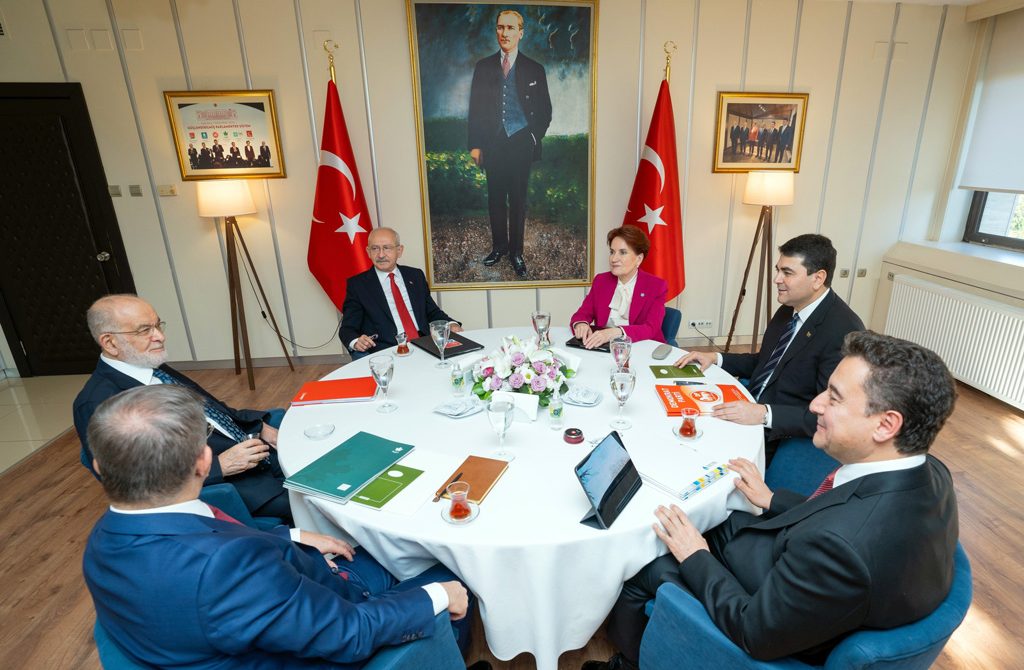 The chairpersons of the political parties in the opposition bloc – known as the “table for six” – attend a meeting at the headquarters of the Democrat Party (DP) in the capital Ankara, Türkiye, Nov. 28, 2022. (IHA Photo)

As the Western-dominated liberal world order gives way to multipolarity, the opposition seems to think romantically about the possibility of aligning with this past reality

President Recep Tayyip Erdoğan dictates the political agenda by taking additional steps within the framework of his administration’s normalization policy and talking about a potential ground incursion into northern Syria.

The opposition heavily criticized Erdoğan’s handshake with Egyptian President Abdel-Fattah el-Sissi and the suggestion that he could contact Syria’s Bashar Assad, recalling that they had urged the government to take those steps in the first place. That does not, however, alter the fundamental reality of Turkish political life: That the Justice and Development Party (AK Party) is miles ahead of the opposition in foreign policy and national security.

Meanwhile, some commentators keep asking whether the opposition has developed (or could ever develop) a foreign policy.

Before answering that question, let me stress that the AK Party governments have been using foreign policy to transform domestic politics and improve Türkiye’s international standing for two decades.

Accordingly, the government did everything in its power. Yet, it opted for repositioning at the moment of change and developed the discourse to support that decision.

In my opinion, Erdoğan’s success as a political leader rests on a delicate balance between domestic politics, national security, foreign policy and the economy.

Obviously, it takes a lot of skill to strike that golden balance.

In a world, where domestic politics and foreign policy are virtually inseparable, reminding politicians of any old war of words has very little impact. That is because they can explain to the electorate that they have adopted a new stance after doing everything in their power.

As in the Turkish people remembering that Erdoğan, who adheres to a proactive policy in the fight against PKK/YPG terrorists, made two attempts in the past to tackle the Kurdish question.

Just like they remember that the AK Party took radical steps to join the European Union, which hindered Türkiye’s admission process, whenever Ankara experienced tensions with certain Western governments.

Just like Türkiye could not have survived the extreme turbulence in 2013-2016 without antagonizing many countries. As in Türkiye’s post-2016 national security approach focusing on independence – which is worth risking tensions with some nations.

Just as Türkiye had to pursue a normalization policy to cement its gains, having used hard power in Syria, Iraq, Libya and the Eastern Mediterranean. Indeed, beneath Türkiye’s successful balancing policy in the Ukraine crisis lies that experience.

To date, the “table for six” has been unable to create an alternative to the People’s Alliance in foreign policy and national security. Erdoğan, by contrast, has been reaping the benefits of his strong performance in foreign policy as a force multiplier. The combination of normalization and new security policies represents a fresh approach for the government.

Accordingly, it highlights diplomacy to push back against the opposition’s criticism and boosts Türkiye’s image as a country that acts independently when its security is at stake.

Nowadays, the opposition parties – which disagree on the Kurdish question, counterterrorism measures, Syria, and the PKK terrorist organization’s Syrian branch YPG – seem to agree on Türkiye’s ideal position in the international system. They maintain that the country must “position itself in the West through comprehensive democratization.”

As the Western-dominated liberal world order gives way to multipolarity, the opposition seems to think romantically about the possibility of that kind of alignment.

Today, the transatlantic alliance appears to be united regarding the Russian invasion of Ukraine. Yet, the EU, starting with Germany, shoulders the financial burden. Many find Europe’s growing dependence on the United States unsettling. Meanwhile, Germany cannot even get France, let alone the remaining members of the fragmented EU, to support its China policy.

New stance toward the West

Türkiye adopted a new stance toward the West due to the latter’s blatant disregard for Turkish interests (as opposed to ideological concerns).

Has anyone forgotten that the U.S. and the EU abandoned Türkiye in 2015, when it faced Russia in Syria? Will cozying up to the EU, which imposes the maximalist demands of Greece and the Greek Cypriots on Türkiye, solve any problem?

Is it possible for Washington, which still chooses PKK/YPG terrorists over Türkiye in the name of fighting Daesh, to persuade Ankara?

Türkiye’s policy toward Russia, Syria, Libya, Karabakh and the Eastern Mediterranean marked the beginning of a new chapter, even though some of the Western Alliance’s members do not support that policy.

Accordingly, Ankara consolidated its status as a country with “autonomy” within NATO and the Western Alliance.

That status allows Türkiye to expect Finland and Sweden to meet certain demands to join NATO and to pursue an exceptional balancing policy in the Ukraine crisis.

At the end of the day, the opposition’s romantic pro-Western stance would not counterbalance Russia and other regional challenges. What they could receive from the U.S. and the EU by playing nice would be a fraction of all the problems that they could not manage.

The path to repairing Türkiye’s relations with the West in a healthy and lasting manner goes through accepting Türkiye’s new realities.

World Cup 2022: Massive hypocrisy of the West toward Qatar
Previous

Clash of 'visions' as Türkiye's 2023 elections loom
Next
Loading...
Loading...
We use cookies to ensure that we give you the best experience on our website. If you continue to use this site we will assume that you are happy with it.Ok