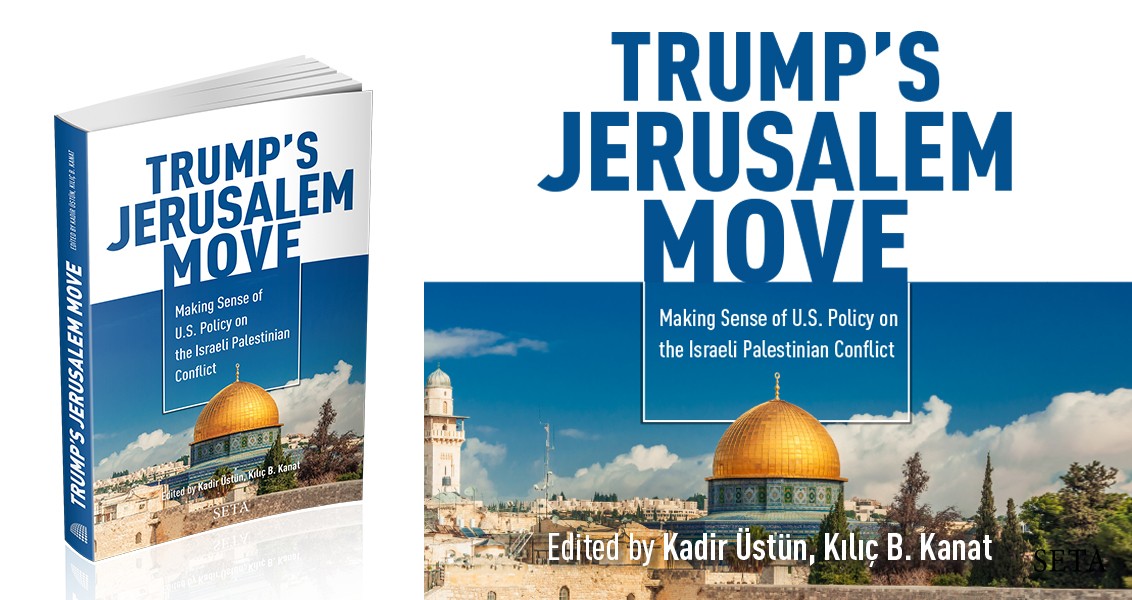 President Trump’s decision to recognize Jerusalem as the capital of Israel and move the U.S. embassy to the city prompted this edited volume. Trump had already promised to make this move on the campaign trail but most of the foreign policy experts did not expect him to go forward with the idea as quickly as he did. Many judged that it would most likely be a promise unkept and the decades-old U.S. policy would hold. The Jerusalem Embassy Act of 1995 recognized the city as the capital of the State of Israel and called for Jerusalem to remain an undivided city. However, all the U.S. administrations left the issue to be resolved between the parties as part of the final status negotiations. Prior to Trump’s decision, most experts considered the peace process to be real in name only with very little prospect for a two-state solution. In this sense, Trump’s decision was essentially a nail in the coffin of the peace process. The U.S. was finally openly admitting what many critics argued for a long time, that is, the U.S. would side with Israel.

The Jerusalem embassy move triggered a diplomatic pushback energized by Turkey’s leadership in various international fora. It also resulted in clashes on the ground and the killing of many Palestinians by Israeli security forces during the official opening ceremony of the embassy. Clearly, Palestinians were not in a position to start yet another Intifada, as violence in previous Intifadas cost them immensely and led to further deepening of the Israeli occupation. The Muslim leaders around the world joined Turkey in condemning the Trump administration’s decision, however, the international isolation of the U.S. remained largely in the diplomatic arena. Many Muslim countries avoided a serious clash with the U.S. over the issue although they were apprehensive about potential violence on the ground. Turkey mobilized the OIC and the UN while calling for a recognition of East Jerusalem as the capital city of Palestine. The importance of Jerusalem cannot be overstated for the Muslim world but the international mobilization against Trump’s decision fell short of reversing the U.S. decision.

In this volume, we analyze the rationale and implementation of President Trump’s Jerusalem decision, what it means for the U.S. sponsored peace process, and the international reactions it triggered. In the first chapter, Lara Friedman draws attention to a fundamental failure of experts in not taking Trump seriously on his pronouncements regarding Jerusalem. Friedman outlines the history of U.S. policy on Jerusalem prior to Trump and demonstrates how the policy evolved over the previous decades. Friedman shows it was not out of the blue for Trump to make the Jerusalem declaration but rather that most of the experts refused to listen and take him seriously. Friedman’s contextualization of the decision within the Trump administration’s broader efforts to redefine the peace process is a stark reminder that the Jerusalem move has to be considered within this wider framework. Friedman skillfully shows how the Trump administration systematically undermined different aspects of the peace process as we knew it.

In the second chapter, Yousef Munayyer argues that the U.S. policy on Jerusalem allowed successive U.S. administrations to claim a mediator role while they were consistently supporting Israel. Munayyer shows that Trump’s decision effectively ended this already flawed claim and exposed the reality of the U.S. policy. Having shown the internal contradictions of the decision, Munayyer focuses on the message sent to the Israelis and the Palestinians. As the decision closes the Oslo era, according to Munayyer, the U.S. policy is becoming increasingly indistinguishable from the Israeli position. However, as the mask on the decades-old U.S. policy falls, he foresees a fundamental shift in the U.S. policy in the near future, partly owed to congressional action and partly to developments on the ground.

In the fourth chapter, Guilherme Casarões argues that Trump’s decision was met with skepticism across South America. Focusing on Paraguay and Brazil, countries that seemed to oscillate between siding with and going against Trump’s Jerusalem decision, Casarões shows that the decision created frictions even among politicians supporting it largely as a result of domestic political ramifications and economic relations with Arab countries. In Brazil, for example, Bolsonaro ended up striking a middle road with opening a trade office in Jerusalem instead of going forward with moving the Brazilian embassy to the city. Casarões presents a complex interplay of a variety of political and economic factors for Paraguay and Brazil on the issue of Jerusalem.

In the fifth chapter, Jacob Eriksson explores how the Jerusalem move played itself out among European countries. Pointing out that Europe opposed the move from the beginning, Eriksson outlines the growing divisions as well as the right-wing nationalist populism’s increasing pressure to revise the European policy on Jerusalem. These difficulties have made it difficult to oppose Trump on the matter as a united front, Eriksson argues, while Europe tried to maintain its traditional position on the two-state solution no matter how elusive. Eriksson’s analysis suggests that the EU will continue to be divided between these forces (international norms and rise of populism) in the near future thanks to the lack of effective decision making.

In the sixth chapter, Kadir Ustun and Kılıç B. Kanat explain the evolution of the Turkish policy toward Israel and identify the Israeli-Palestinian conflict as a major determinant of the nature of the Turkish-Israeli relationship. They argue that all Turkish governments, regardless of their ideological alignments, have been highly sensitive to the plight of the Palestinians since the 1990s and earlier. Outlining the main developments in the Turkish-Israeli relationship under the AK Party during the 2000s, they identify the Operation Cast Lead as a major turning point in Turkey’s consistent critique of the Israeli policies against Palestine. Under President Erdogan’s leadership, they analyze the Turkish efforts to lobby the international community against Trump’s Jerusalem decision at a time when Turkey was trying to also fix its relations with the U.S.

In the seventh chapter, Mark Perry recalls his encounters with the late Palestinian leader Yasser Arafat who was under immense pressure and physical siege by Israel in the early 2000s. Perry argues that the main contribution Arafat hoped to receive from the U.S. was for them to “balance the scales” at a time they were heavily weighing tilted in Israel’s favor. Debunking the myth of Arafat as the responsible party for the failure of the peace talks, Perry analyzes the emergence of a fundamental division between various groups within Fatah. Nothing seems to summarize this division and change within Fatah better than the one differences between Yasser Arafat and Mahmoud Abbas, according to Perry. Perry argues that Trump simply made it crystal clear to everyone that the U.S. was “not only Israel’s lawyer … but also its realtor.”

This volume includes a rich and diverse set of perspectives on various aspects of Trump’s Jerusalem decision. It provides us with an in-depth evaluation of the history and background of the decision, its implications for the U.S. policy, and the future of the peace process. The two-state solution has never appeared so out of reach as today. Ironically, some have welcomed the idea that the U.S. will no longer be able to pretend as the neutral mediator that can resolve the Israeli-Palestinian conflict. There is no doubt that the decision is consequential for the U.S. policy but its implications for the rest of the world are also just as significant. There are very few people who still think the two-state solution is a distinct solution or even a possibility. Latin America, Europe, and the Muslim world’s policies are all affected by this monumental change in the status quo. As Israel is fast on its way to becoming an apartheid, in the judgment of most observers, the international community will need to craft a new approach in the absence of true leadership by the U.S. Turkey’s leadership has been very critical in keeping the attention on the matter and even isolating the U.S. and Israel in the international arena. At the same time, Turkish efforts have to be supported by the Muslim leaders as well as their European and Latin American counterparts to reach a just solution in Palestine.

Opposition in the age of coronavirus
Next
Loading...
Loading...
We use cookies to ensure that we give you the best experience on our website. If you continue to use this site we will assume that you are happy with it.Ok