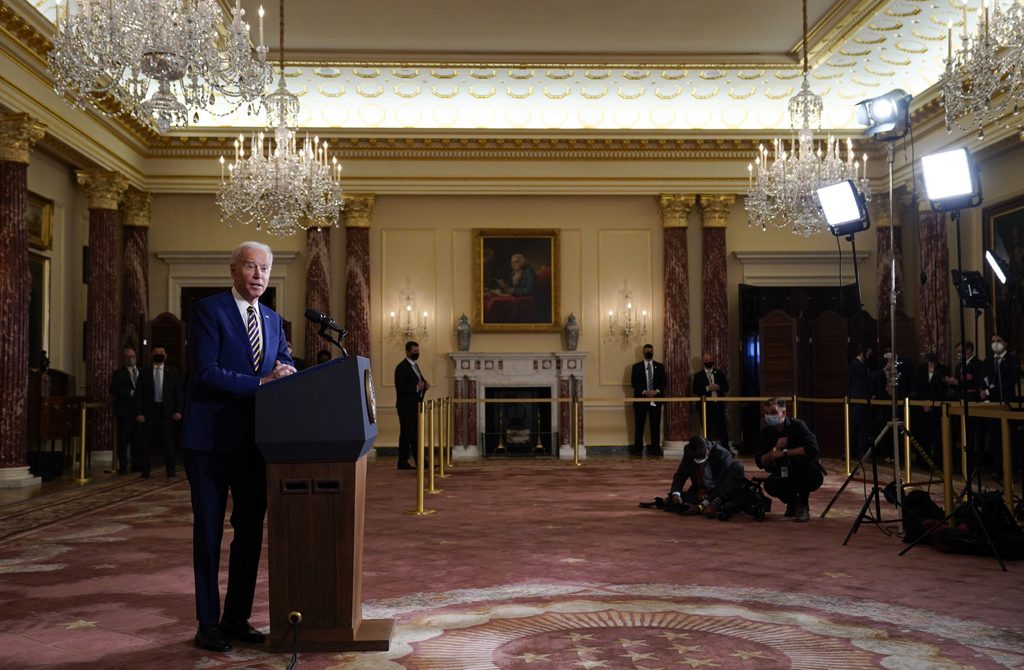 U.S. President Joe Biden has declared that he will follow a different policy toward the countries in the Middle East. Former U.S. President Donald Trump established "the alliance of the globe” consisting of Saudi Arabia, the United Arab Emirates (UAE), Bahrain and Egypt. Israel was a de facto member and external supporter of this alliance.

U.S. President Joe Biden has declared that he will follow a different policy toward the countries in the Middle East. Former U.S. President Donald Trump established “the alliance of the globe” consisting of Saudi Arabia, the United Arab Emirates (UAE), Bahrain and Egypt. Israel was a de facto member and external supporter of this alliance.

Trump asked that alliance to punish Qatar, the home of the largest American military base in the Middle East, to normalize their relations with Israel, the main “other” of the Arab world, and to pursue a simultaneously anti-Iran and anti-Turkey policy.

It became evident during Biden’s first days that the new president, who stated that he would try to normalize American relations with Iran, would not give an “open check” to any of the members of “the alliance of the globe,” including Israel.

The Biden administration has declared that it will recalibrate its relations with Saudi Arabia, the longtime ally of the U.S. since the early 1950s. It seems that the good days have ended for the ringleaders of “the alliance of the globe.”

When looked at closely, one can see that there are several significant developments indicating this negative recalibration of bilateral relations between Riyadh and Washington.

First of all, Biden did not meet with Saudi Crown Prince and de facto leader Mohammed bin Salman (MBS). Instead, he gave a message to MBS by calling the king himself.

When the White House spokesperson was asked whether Biden will call MBS or not, he replied that Biden’s counterpart is not MBS but the king himself. Although the king is old and unable to run the country, Biden preferred to call him.

Second, the lack of democracy will be used as a strategic asset by the Biden administration. In this term, Saudi Arabia will be one of the victims of the return to the “democratic political discourse.”

The new U.S. government will problematize the imprisonment of opposition figures. As a positive message to the Biden administration, Riyadh has freed the famous woman activist Loujain al-Hathloul from the prison.

Third, the U.S. has begun to question Saudi Arabia’s interventionist and irredentist policies in the region.

For instance, the U.S has criticized the Saudi military intervention in the Yemeni crisis and the anti-Qatari embargo imposed in 2017. Saudi Arabia, which has been following an irredentist policy in order to protect the regional status quo, has otherized any change of power in the Middle East, including democratic forces.

Fourth, Saudi Arabia has taken some steps showing policy changes in its regional policy in order to please the new U.S. government. It has normalized its relations with Qatar and ended the anti-Qatari embargo, which was read as an official step declaring the end of “the alliance of the globe.”

The U.S. has imposed several sanctions against Saudi Arabia. It has put a visa limitation for 76 high-level Saudi officials, who were involved in the Khashoggi murder.

U.S. Secretary of State Anthony Blinken claimed that the U.S. will not tolerate silencing policies and pressures against the opposition.

However, similar to the Trump administration and contrary to Biden’s previous explanations, the Biden administration does not consider sanctions as a viable option against MBS, who was named as the responsible party for the Khashoggi killing.

MBS in the game

It seems that the new U.S. government will put some pressure on MBS, but it will keep him in the game. That is, the Biden administration’s aim is not to redefine its relations with Riyadh but to recalibrate its bilateral relations.

In other words, the report will not change the nature of bilateral relations between the two countries.

Finally, the Biden administration’s use of the report has shown that the problem is not the lack of democracy but the maximization of national interests.

What is the greatest problem in Turkish politics?
Previous

Развојот на односите Анкара - Париз зависи од „нормализацијата“ на Франција
Next
Loading...
Loading...
We use cookies to ensure that we give you the best experience on our website. If you continue to use this site we will assume that you are happy with it.Ok