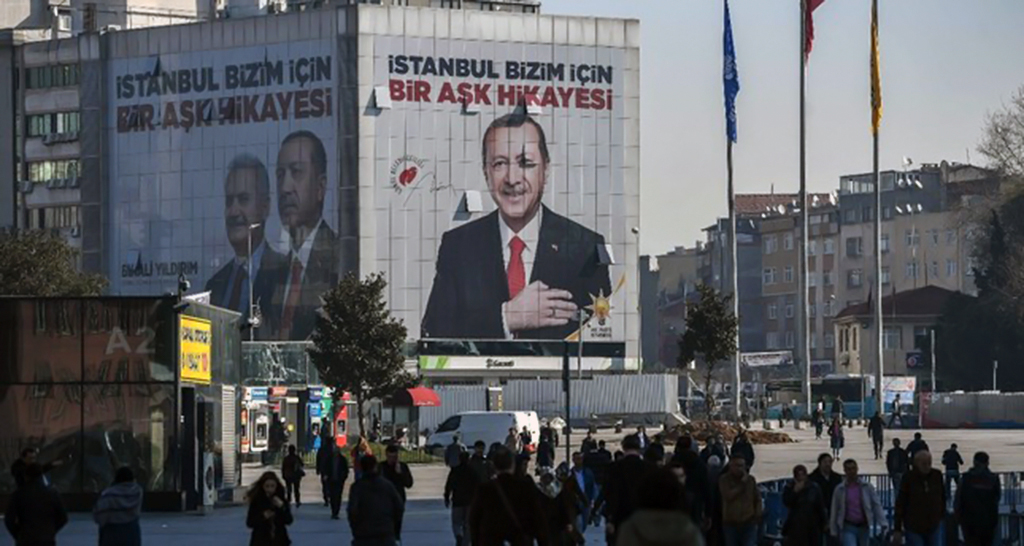 A giant campaign poster for local elections bearing a picture of President Erdoğan and reading “Istanbul Is a Love Story For Us” covers the facade of a building, March 26, 2019.

Turkey's Supreme Election Council (YSK) has been reviewing objections to the unofficial vote count in Istanbul. The election watchdog found errors in the vote count as well as certain irregularities.

Turkey’s Supreme Election Council (YSK) has been reviewing objections to the unofficial vote count in Istanbul. The election watchdog found errors in the vote count as well as certain irregularities. These proceedings, which are intended to establish what exactly the people decided, are the safeguard of democracy. It is crucial to place one’s faith in the recount, which takes place in the presence of all parties’ representatives. Indeed, all parties and candidates must agree that not even a single vote may go to waste. Refusal to comply with procedure would raise questions about one’s self-confidence and could amount to disrespect for the people’s voice. Under the presidential system, the Turkish people will have to get used to close races between two large blocs. Challenges and an extended wait for official results simply come with the territory. We already know that recounts are built into the U.S. electoral system. Let us recall that the 2000 presidential election’s outcome was heavily contested and subject to a recount.

The same thing happened in Turkey after last month’s municipal elections. An even smaller margin could emerge in a presidential race; therefore, Turkey might have to pass new legislation to introduce, among other things, an automatic recount if the margin of victory is below 1 or 5 percent. Indeed, the war of words between the two electoral alliances over recounts was saddening. In recent days, we witnessed problematic developments like Ekrem İmamoğlu, the Nation Alliance’s mayoral candidate in Istanbul, declaring himself the winner and signing the guestbook at Mustafa Kemal Atatürk’s mausoleum with his self-proclaimed title.

That the opposition portrayed challenges to the unofficial vote count, which is a democratic right, as “stealing the election” was irresponsible to say the least. Democratic maturity requires more than inclusive rhetoric. Words must be backed with concrete, reasonable actions. At the end of the day, the YSK alone will decide the fate of the election. There is no doubt that voters will have their way.

All the comments about the municipal election revealed how critical it was. Various political parties highlighted their strengths to write their own success stories. They added that their opponents had suffered setbacks. Western media, in turn, was quick to declare “the beginning of the end” for President Recep Tayyip Erdoğan – and the downfall of a political legend. Others jumped to the conclusion that the Justice and Development Party (AK Party), weakened by the election results, won’t be able to recover. Such extreme views must be taken with a grain of salt, as they are merely politics by other means rather than part of a genuine effort to make sense of Turkish politics.

We must be diligent in our efforts to subject the election results to objective analysis. It makes sense to look into the impact of individual candidates and campaign rhetoric on the outcome. It is absolutely necessary to see how competition in metropolitan districts affected individual parties and resulted in volatility within and between electoral alliances. Another important question is how the changing sociology of urban areas impacts voter behavior. Finally, we must analyze how urban conservatives and Kurds are changing.

Yet, the following mistakes must be avoided in learning the election’s lessons:

First: The single gravest post-election mistake is to ignore real problems and to underestimate one’s opponent. Likewise, exaggerating one’s accomplishments could lead to a misinterpretation of actual trends – which often leads to new losses.

Second: Exaggerating and misinterpreting one’s losses to the extent of undermining morale and one’s motivation is an equally grave mistake. Desperately looking for scapegoats among one’s own ranks could undermine the group’s sense of unity.

In the end, taking stock must be done in the right way to ensure that it leads to meaningful results.
[Daily Sabah, 10 april 2019]
Share

The resurgence of regional chaos and instability
Previous

The Rise of the Turkish Defense Industry
Next
Loading...
Loading...
We use cookies to ensure that we give you the best experience on our website. If you continue to use this site we will assume that you are happy with it.Ok