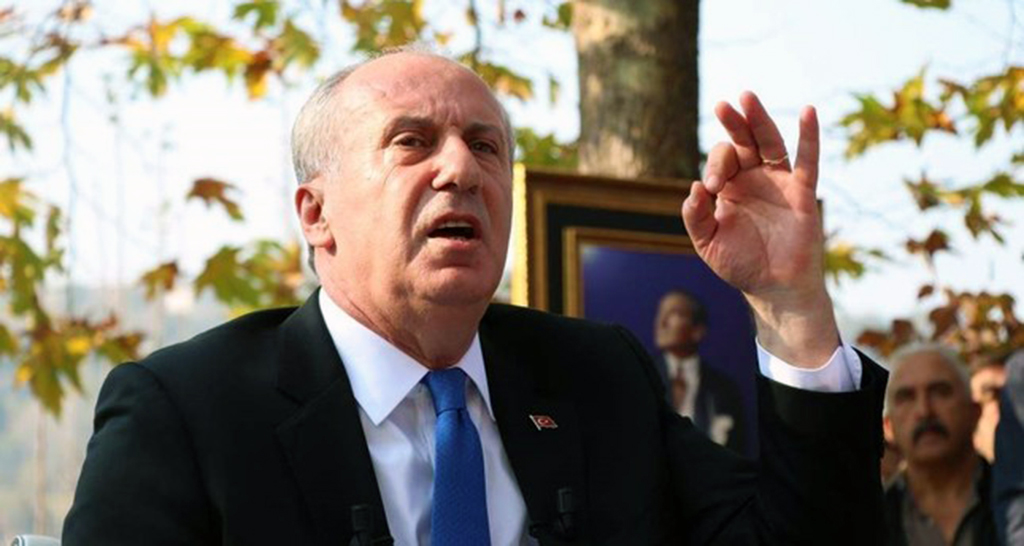 While different factions within the main opposition continue to blame one another for once again emerging intra-party crisis, experts say point to a power struggle as the main cause of the problem in the Republican People's Party (CHP)

The Republican People’s Party’s (CHP) intra-party crisis that started with claims that a senior CHP member had visited the presidential palace is not likely to end soon as the debate has taken a complex turn, with different poles in the party blaming each other. The party’s former presidential candidate, Muharrem İnce, who has been the target of the allegations regarding the visit, has been blaming “a particular gang” within the party for creating the conspiracy.

Speaking to Daily Sabah, journalist Mahmut Övür stated: “A political plot originating from within the CHP is happening, and [party Chairman Kemal] Kılıçdaroğlu himself has been the one activating this plot. Kılıçdaroğlu has created this by saying ‘I do not know the name’ while verifying the news, the writer of which has even apologized for,” explaining that this proves that he has personally been involved in this since the beginning and that it is no coincidence but rather a plan. “Even though at first it seemed as if the agenda was being manipulated and the rival defamed, there is a deeper political operation in the background. Its aim is to realize the ‘last clearance’ in the CHP,” Övür added.

The main opposition has been shaken by the claims, which were brought forward with Sözcü daily columnist Rahmi Turan. Turan cited another journalist, Talat Atilla, as the source of his claim, who said a source within the CHP told him about the alleged meeting.

While CHP leader Kılıçdaroğlu blamed the ruling Justice and Development Party (AK Party) for causing trouble within the CHP, İnce stated that a circle within the CHP has been plotting and spreading lies against him since the 2018 presidential election. He also said all actors involved in the series of attacks targeting him since the presidential election are from within the CHP, rather than AK Party members. Meanwhile, İnce announced yesterday on Twitter that he filed a claim against those writing the fake news and their sources.

Offered as the CHP’s presidential candidate in the 2018 elections, İnce declared a few months ago his intention to run again in the next polls. İnce competed in the June 24 presidential elections and received 30% of the votes, falling behind the winner, President Recep Tayyip Erdoğan. Yet support for İnce surpassed the support for his party, the CHP, by 8 percentage points in the parliamentary elections. The vote gap inspired İnce and his entourage to attempt to dislodge the party’s long-standing leader Kılıçdaroğlu.

“There is an underhanded debate going on within the CHP. Different factions exist in the party. Among these are socialists, Kemalists, liberals, etc. There has always been a power struggle, yet due to the elections that came one after the other, these debates had been delayed – until now,” Nebi Miş, a political analyst, told Daily Sabah, adding that provincial and district congresses have already started and that this debate has been reflected in them as well as in the delegation elections.

In a press conference held at his home in northwestern Yalova province on Nov. 24, İnce urged the CHP to get rid of all actors who cause internal strife and spread lies, causing great harm to the party.

“A feud between the group İnce describes as the ‘gang’ and himself has been going on since the beginning. They have done everything to defame İnce, but he could not offer a clear political stance in this matter,” Övür added.

“The CHP does not produce politics but lies. It does not produce solutions but problems. Mr. Kemal [Kılıçdaroğlu] has turned the CHP into a lie-production center. Currently, their own conspiracies are clear and obvious,” President Recep Tayyip Erdoğan told journalists on the presidential plane on his way back from Qatar on Monday.

Referring to allegations that intelligence units intervened in the CHP’s interior affairs, Erdoğan stated: “The intelligence has such grand issues … does it have the time to waste on this? Currently, our intelligence unit is coping with Operation Peace Spring.” The president added that Kılıçdaroğlu tries to claim that there is no conspiracy within the party and that he should talk to İnce. “He [İnce] describes you well. We do not need intelligence, Mr. Muharrem is already enough,” he stated.

Upon being asked if he preferred Kılıçdaroğlu to be at the head of the CHP, Erdoğan responded: “This is a plus for us. Mr. Kemal’s stay is an advantage. He denies what he said the very next day. He says ‘Why not?’ And then they have an odd approach as to say ‘that something did not happen, but could.’ I have been prime minister, president for years, what I regret most is that I could not find opposition with ability.”

This is not the first time the CHP has experienced internal conflict. Several dissidents, including prominent figures, were either fired or resigned from the party. Many of these figures criticized Chairman Kılıçdaroğlu for failing to step down even though he has never won a single election in almost a decade.

“The poor man has no idea that every license plate entering the Presidential Complex is recorded. Whichever vehicle enters (the complex), it is recorded. Photos are taken at the entrance. When we presented all of these, he had nothing to defend,” Erdoğan continued.

Indicating that the time this debate occurred is also noteworthy, Övür stated: “The CHP is holding its congresses, and next year the general assembly will take place. The aim is to eliminate classical CHP political actors that could raise objections through the most obvious critic, Muharrem İnce. This effort is also overlapping with the expectations of foreign powers targeting Turkey and their apparatus FETÖ [the Gülenist Terror Group] and the PKK.”

“How much time is left for the 2023-2024 elections? What are they [CHP] fighting for, for the general assembly? After all, the sir [Kılıçdaroğlu] has no other candidate other than himself,” Erdoğan said, adding that the CHP is defaming Turkish politics. “They try to discredit politics. If there is trust in politics, then the trust of people also rises. Yet, if these disappear, the people’s confidence in politicians and the political basis will also disappear,” the president also stated.

Övür further explained that İnce mentioned a “national and local” political line and that this might be the key; accordingly, the possibility of such a gathering around İnce in the CHP must have scared those trying to shape the party, leading them to target İnce. “İnce did not have a chance in the upcoming general assembly anyway, but he had the potential to cause trouble,” Övür said.

Presidential Complex open to every citizen

Speaking on the Turkish Grand National Assembly (TBMM) group meeting yesterday, the president reminded everyone that the presidential complex is the home of the people and that just like everyone else, CHP members have also the right to visit. Erdoğan further gave examples of leading figures visiting the complex, such as Kılıçdaroğlu after July 15, Nationalist Movement Party (MHP) Chairman Devlet Bahçeli and the visit of İnce, who did not come to the complex but visited the AK Party at its headquarters during his presidential candidate period. Istanbul Mayor Ekrem Imamoğlu also visited as well as all other metropolitan mayors.

On the other side, Takvim daily Ankara representative Zafer Şahin explained that this is an attack on Turkey and not only the CHP. “What is important here is that Turkish politics are trying to be shaped by FETÖ methods. It is obvious that İnce being a presidential candidate does not comply with the plans of someone.”

“We would not refrain from discussing and evaluating Turkey’s issues with Turkey’s second-biggest party’s leaders; yet, what has happened over the last few days is going in another direction. I did not advise any CHP member to be the head of the party because there cannot be a more ideal head than Kılıçdaroğlu,” the president added yesterday.

On the other side, Miş emphasized that there are multiple goals behind the attack on İnce. “There have been plots against Deniz Baykal with the tape scandal, against AK Party and against the MHP.”

Opposition attempts to change Turkish agenda
Next
Loading...
Loading...
We use cookies to ensure that we give you the best experience on our website. If you continue to use this site we will assume that you are happy with it.Ok