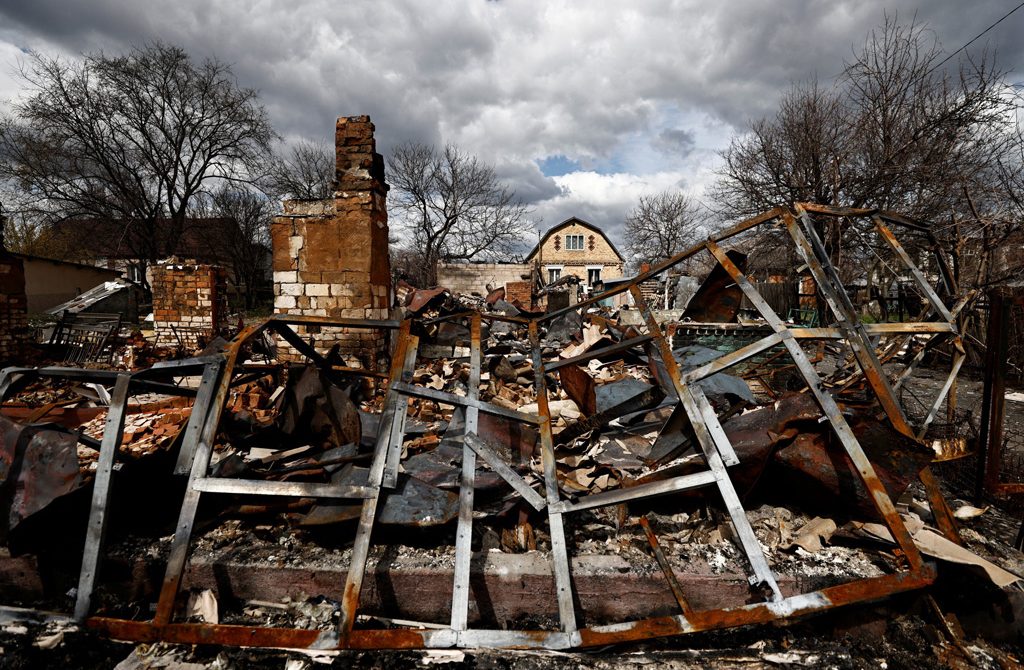 The remnants of a house destroyed by Russian shelling, amid Russia's invasion of Ukraine, in Borodyanka, Kyiv region, Ukraine, April 12, 2022. (Reuters Photo)

As the Russia-Ukraine war resumes and the tension in world politics deepens, we are starting to hear more about the discourse of a 'new Cold War'

When the coronavirus pandemic started, many commentators argued that it was going to give momentum to the “great power competition.” Holding China responsible for spreading the virus, they posited that a new Cold War was brewing between the United States and the Asian country. As the pandemic slowly dies down, the debate has shifted to the potential impact of the Russian invasion of Ukraine on the international system. That same phrase – a new Cold War – is being used to describe the global change that the war has triggered. This time around, of course, it refers to tensions between the Western alliance and Russia.

The American-dominated liberal world order, which emerged after the Soviet Union’s collapse, was already in a crisis. Nowadays, however, people are saying that the liberal order has ended and the world is experiencing a new period of global (dis)order. As a matter of fact, it goes without saying that the most recent revisionist invasion by Russia, a permanent member of the United Nations Security Council, represents a serious crisis within the U.N. system.

For the Western alliance, President Vladimir Putin’s Russia poses a serious threat. It is a positive sign that Moscow no longer talks about using nuclear weapons, as it did at the beginning of the Ukraine war, but it is not lost on anyone that U.S. President Joe Biden’s critique of Russia and its president keeps getting more vocal. Indeed, Biden’s rhetoric has moved from “war criminal” to “genocide.”

Provided that the United States cannot possibly stop trying to contain China, the real competition, one could conclude that today’s great power competition increasingly looks like a new Cold War with two fronts. In their Foreign Policy article, Mathew Burrows and Robert A. Manning argue that this new situation would mean “far higher military expenditures, great uncertainty weighing down the global economy, and a diversion from the Biden administration’s foundational goal of rebuilding the United States.” As such, they warn the Biden administration against fighting a two-front Cold War against Russia and China.

A prolonged war in Ukraine and the West’s potential insistence on ending Russia’s great power status through military defeat would deepen the first front of the Cold War. In that case, the second front – China’s choice – will be critically important. Providing military and economic support to Russia would significantly hurt Chinese interests in the global trade balance. However, watching Moscow get roughed up does not work for Beijing either. Instead, China could build a “strategic relationship” with a weakened Russia under more favorable conditions. Considering that China and India, not to mention many regional powers, have not sanctioned Russia, it also seems unlikely for the United States to keep fighting a two-front Cold War. Europeans who expect Putin to share the fate of former Serbian President Slobodan Milosevic seem to seriously underestimate Russia’s ability to tilt the global balance of power. Indeed, even at this stage, sanctions have resulted in global food, energy and financial crises. There are already predictions that the U.S. dollar’s status as the world’s predominant reserve currency could be weakened. Meanwhile, U.N. Secretary-General Antonio Guterres warns that the world is not ready to cope with the war’s effects – which he describes as “global and systemic.” He thus calls on world leaders to end the war.

Turkey has been leading efforts to limit the negative impact of the pandemic and the Ukraine war. President Recep Tayyip Erdoğan is known for frequently highlighting the unjust nature of the current international system and calling for a reform of the U.N. system. Indeed, the Turkish leader turned to diplomacy before the war started and ever since in an attempt to facilitate a cease-fire and peace. Having engaged with many leaders, Erdoğan made talks possible between Russia and Ukraine in Antalya and Istanbul. Even though what happened in the Ukrainian cities of Bucha and Irpin, together with the fight intensifying in Donbass, undermined those negotiations, Turkey remains committed to bringing together the Russian and Ukrainian presidents.

Indeed, it was noteworthy that Austrian Chancellor Karl Nehammer was in touch with Erdoğan prior to his meeting with Putin and, after that meeting, said that his only source of optimism was the Russian president’s reference to the negotiations in Istanbul. Of course, the Russia-Ukraine talks alone cannot end this climate of war. An agreement must be reached between the U.S., the European Union, NATO and Russia, too, to define the new chapter. As a country that most accurately interprets changes in the international system and adapts its a policy to such changes, Turkey could make serious contributions to that agreement.

To prevent a new Cold War, which could continue for decades, it is time for the leaders to lead.

Opposition against opposition in Turkey
Previous

Tough questions facing opposition bloc in Turkey
Next
Loading...
Loading...
We use cookies to ensure that we give you the best experience on our website. If you continue to use this site we will assume that you are happy with it.Ok