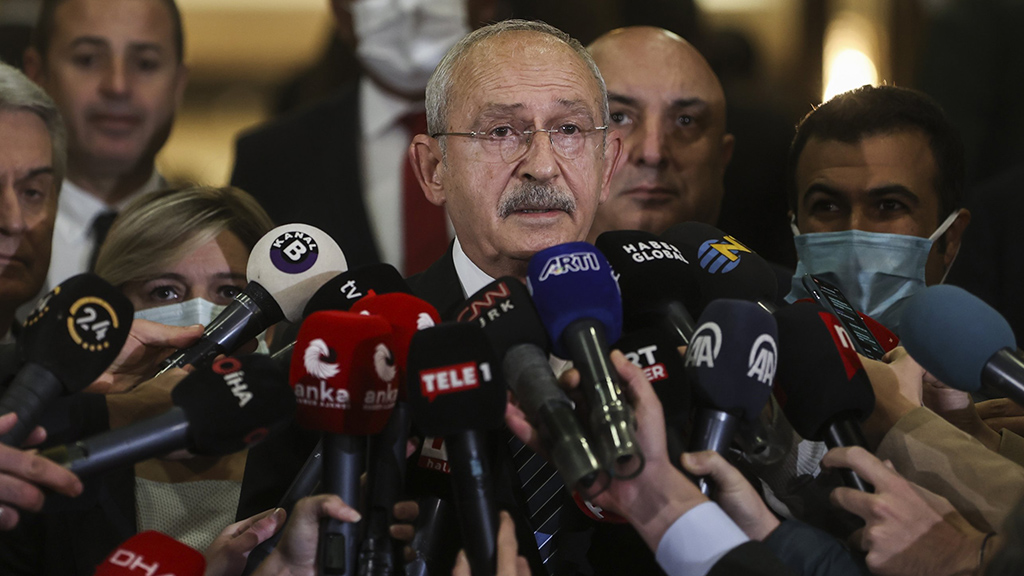 The main opposition leader is attempting to make intra-party and alliance changes. However, it seems he will need more than just that

There are mind-blowing developments taking place in Turkey’s political arena. The pro-opposition Nation Alliance, in particular, has been dealing with major crises and policy changes. The main opposition Republican People’s Party (CHP) sparked a fresh controversy by opposing military operations in Syria and Iraq, thus aligning itself with the Peoples’ Democratic Party (HDP) that faces closure over its links to the PKK terrorist organization. Leaving aside the mounting criticism from the ruling Justice and Development Party (AK Party) and the Nationalist Movement Party (MHP), the Good Party (IP) is finding it difficult to cope with that decision. The recent statements by party officials, who accused the HDP of being “on the PKK’s side” and threatened to withdraw from the alliance if the CHP were to join forces with the HDP, attest to that fact.

For the record, it was the CHP’s decision to overhaul its national security policy that started the latest crisis, rather than any moves by the pro-government People’s Alliance. Thus emerged a major theme of the 2023 campaign.

At this rate, the HDP question, together with the trauma caused by IP lawmaker Lütfü Türkkan insulting a relative of a fallen soldier, will haunt the IP for the foreseeable future. After all, Türkkan is no foot soldier that Meral Akşener, the party’s chairperson, can simply toss aside. While Akşener was dealing with that trauma, CHP Chairperson Kemal Kılıçdaroğlu made his next move and announced his decision to go on a trip to “make amends.”

‘For those who were offended’

In a recently published video, Kılıçdaroğlu is seen saying that his party, CHP, inflicted deep wounds in the past and is taking credit for transforming the system that caused those grievances. He subsequently unveiled a plan to meet with “individuals and communities that we have offended or scared in the past, and representatives of various lifestyles.” At the same time, the main opposition leader pledged to “hold accountable all governments that made a small group of people rich” including the AK Party and his own party. Of course, it was initially unclear whether Kılıçdaroğlu was talking about the single-party regime, the coalition governments of the 1970s, or the aftermath of military coups, including 1960 and Feb. 28, 1997. In particular, one cannot help but wonder how he intends to “hold accountable” all those governments whilst “making amends” with all those social groups. Still, ideas like “confrontation” and “making amends” must be taken seriously – even if they seem to have been recycled by Kılıçdaroğlu’s new advisors as that they are extremely reminiscent of the AK Party’s platform and rhetoric.

Does the main opposition leader attempt to justify his rapprochement with the HDP by talking about “making amends with all social groups” and, by extension, pushing back against the charge of “betraying” the fight against terrorists? Or does he hope to address the deeply rooted concerns of religious conservatives regarding his party? Specifically, what will “making amends” mean to the Kurdish and Alevi communities? Will the CHP attempt to appease those critics, who say that it abandoned the left and drifted to the right? Will it reach out to non-Muslims? Or is this a prelude to some radical critique of Kemalism and the rise of a new leftist platform?

There is a chance that these questions will not arise. After all, there is no reason to believe that the CHP won’t launch an ambitious project to “make amends” – specifically because the impromptu alliance, which Kılıçdaroğlu put together for the 2023 election, has no shared vision for Turkey’s future, barring a return to the parliamentary system. Again, the main opposition leader is highly unlikely to persuade the electorate by imitating the discourse of “radical love” that Istanbul Mayor Ekrem Imamoğlu utilized in the municipal elections.

To be perfectly clear, I do not subscribe to the essentialist view that the CHP is incapable of reinventing itself. It is important to note, however, that the main opposition party has not completely confronted its own past at the leadership, elite or grassroots levels. Indeed, one could say that process is still in the early stages: There has been no serious criticism over the treatment of Kurds or religious citizens. Instead, Kılıçdaroğlu attempts to make progress amid pressure from neo-nationalists, leftists and liberals.

The main opposition leader’s advisers must honestly answer the following question: Are they absolutely confident that asking the CHP to imitate the AK Party’s confrontation with its own past and the Kemalist guardianship regime is a good idea? Let us not forget that learning to stomach the AK Party’s reforms (such as lifting the headscarf ban) does not necessarily mean that the main opposition party managed to rid itself of its Jacobin culture. To ensure that “making amends” becomes more than some political maneuver, Kılıçdaroğlu needs to stop the radical secular anger/hate that his supporters continue to exhibit. After all, he cannot prove that there is no more hate by relying on public statements or visits alone.

What the CHP needs is to radically confront itself – not showy visits or ambigious discourse.

Experts Respond: Struggle for Spheres of Influence Regaining Momentum | How Might the Latest Developments in Europe’s Eastern Front Take Shape?
Next
Loading...
Loading...
We use cookies to ensure that we give you the best experience on our website. If you continue to use this site we will assume that you are happy with it.Ok