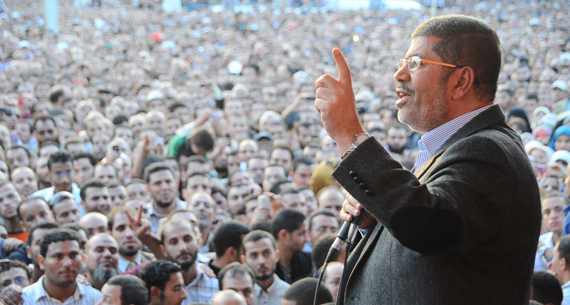 An ancient Chinese saying goes May you live in interesting times which, could describe the dramatic developments that we witnessed this week concerning two key political figures from Egypt and Turkey, former Egyptian President Mohammed Morsi and longtime Turkish politician Süleyman Demirel.

The unlikely idea to write a column in which Morsi and Demirel could coexist came to me when Morsi, who was deposed from power with the brutal force of a military coup, was sentenced to death by a mockery of a court in Egypt, and the doyen of Turkish politics, Demirel, died of natural causes at the age of 91. Needless to say that the two individuals, despite their similar careers as bright engineers with international expertise, represent two extremely different profiles when it comes to defending democracy and their values in the face of authoritarian military oppression.

Morsi was the leader of the revolution and the first democratically elected president in the history of Egypt, which constituted the shining star of the Arab Spring up until the authoritarian reversal under General Abdul-Fattah el-Sissi. He was imprisoned in an unknown location since the coup with no interaction with the outside world. As we were preoccupied by intense discussions concerning coalition negotiations in Turkey among the leading political parties, dramatic news arrived from Egypt concerning the illegal death sentence given to Morsi and several of his colleagues.

The fact that Morsi was deposed from power with a military coup during which hundreds of innocent people lost their lives and kept in prison in an unknown location with false accusations was enough to hamper our hopes for the development of representative democracy in Egypt and the Middle East. Despite strong reactions from Turkey and a handful of countries, the democratic transition in Egypt was clearly hijacked by the authoritarian administration supported openly and financially by the Gulf countries and tacitly by the U.S. and EU. Especially the U.S. administration and leading actors within the EU failed to identify the military intervention as a coup despite the loss of hundreds of lives, deliberately avoided steps to impose international isolation and reflected forged elections in which Sissi received 97 percent of the vote as a sign of political legitimacy. Despite their principled and sustained democratic position, President Recep Tayyip Erdoğan and Prime Minister Ahmet Davutoğlu were often accused of supporting the case of Morsi and democracy in Egypt on an Islamist pretext by implying that there were undisclosed political links between the Justice and Development Party (AK Party) and the Muslim Brotherhood. Yet, in the midst of all these tribulations, Morsi stood as a rock and did not falter for a second to rescue himself or his political career despite the plethora of injustices against him, which have reached to the absurd point of execution.

Yet the known attitude of Demirel over the course of sensitive conjunctures in Turkish political history provides us with a totally different narrative. Despite coming from a humble and conservative background, Demirel formed strong links with Turkey’s secular elite and became a favored partner both for the generals and international actors who wanted to have influence on Turkey’s domestic politics. His interesting political career, which included six terms at prime ministry and one as president, witnessed interruptions with fully fledged or postmodern coups in 1971, 1980 and 1997. Interestingly, during none of these interventions did Demirel try to stand against the will of the generals and defend democratic legitimacy or whatever values he could have. Instead, he managed to become a political survivor by taking his hat and leaving political office rather quietly when required.

We are pretty sure that illegal court decisions against Morsi will be reversed under tense international pressure – after all, both the Gulf countries and Western powers know all too well that a radical decision might prompt undesired chaos in Egypt and the region. But the brave stance of Morsi during this predicament will take its honorable place in history books along with the unprincipled pragmatism of Demirel.

China's War on Ramadan
Next
Loading...
Loading...
We use cookies to ensure that we give you the best experience on our website. If you continue to use this site we will assume that you are happy with it.Ok