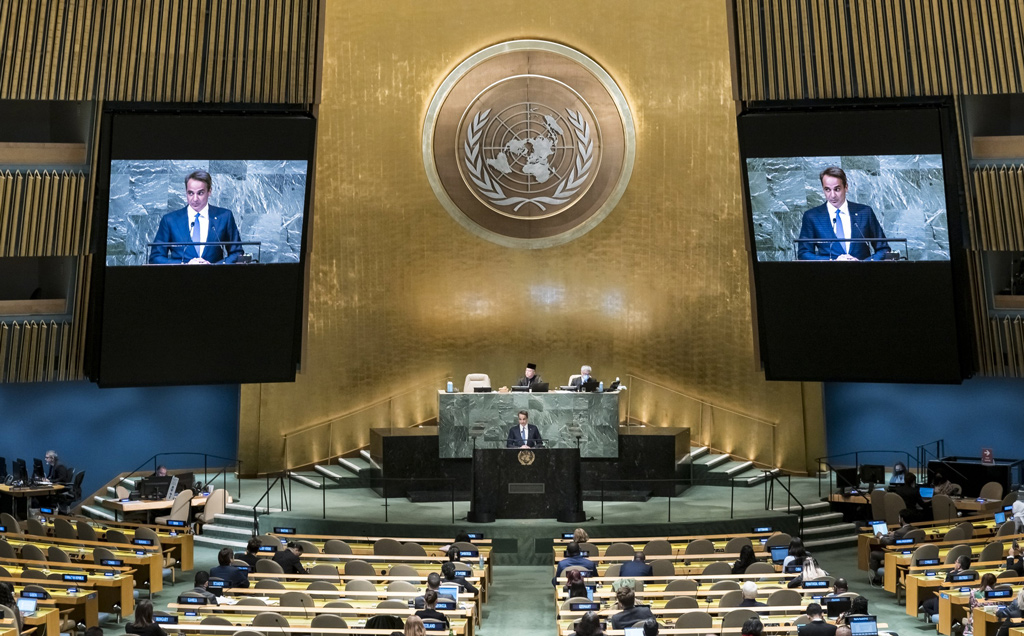 Hardly anyone is surprised by the Greek public’s concerns over Türkiye in this climate of fear. Such concerns or fears have been at the heart of Greek politics for many years.

Primarily, his government attempts to impose on Ankara certain maximalist demands in the Aegean and the Eastern Mediterranean through a fait accompli. A recent incident involving the Greeks placing a radar lock on Turkish jets while conducting a NATO mission and deploying armored vehicles to the islands of Lesbos and Samos in violation of international law attest to that fact.

At the same time, Mitsotakis talks about reconciliation in his address to the 77th session of the United Nations General Assembly, insisting that Greece poses no threat to Türkiye and adding that the two nations are neighbors, not enemies.

By taking those steps, the Greek prime minister pursues a policy that disturbs and provokes its neighbor while attempting to portray Türkiye as the aggressor in his complaints to the United States and the European Union.

That attempt is rooted in a significant amount of greed and a massive miscalculation.

The main reason why Athens has been unhappy in recent years is that Türkiye has upgraded itself to a more significant international power. Ankara’s increasing military footprint anywhere from Syria and Iraq to Libya and Karabakh, coupled with President Recep Tayyip Erdoğan’s role as a broker amid the Russia-Ukraine war earned plenty of appreciation.

Türkiye’s rapprochement with countries like Israel, the United Arab Emirates and Saudi Arabia, whose relations with Ankara were strained at some point, too, undermined the Greek attempt to isolate the Turks.

Nowadays, the Greek government believes that its strengthened cooperation with the U.S. and France and the EU’s backing present an opportunity to harass Türkiye. Washington, in turn, endorses Mitsotakis’ policy in an attempt to counterbalance the region and consolidate its foothold in the Western Balkans and Southeastern Europe. Unsettled by its ongoing competition with Türkiye in many areas, including Africa, France has a similar approach as well.

All those factors encourage the Mitsotakis government to engage in acts of provocation regarding extremely serious and vital issues like his country’s territorial waters in the Aegean and the militarization of the islands.

President Erdoğan’s recent warnings and his reference to the Turkish Republic of Northern Cyprus (TRNC) at his U.N. address showed that Türkiye has no intention of giving up on its vital interests in the Aegean, the Eastern Mediterranean, or the island of Cyprus.

Indeed, no Turkish government could or would ever make any concessions regarding these national issues. Nor could a fait accompli lead to addressing the disagreements over the strategic water body called the Aegean. Quite the contrary, multidimensional cooperation, economic integration and good neighborly relations are the only way to solve the issues.

By contrast, the Greek prime minister turned down Erdoğan’s offer of friendship by launching an anti-Turkish campaign at the U.S. Congress to fuel bilateral tensions. Hardly anyone is surprised by the Greek public’s concerns over Türkiye in this climate of fear. Such concerns or fears have been at the heart of Greek politics for many years.

By contrast, the Turks did not think of Greece as a significant threat – despite the negative perception of the Greeks linked to the Turkish War of Independence. Despite the support of the U.S., France and the EU, the Mitsotakis government engineered a campaign fueling serious concerns among the Turkish people today.

To say that Greece poses no threat to Türkiye is not to cover up the hostility of its actions.

Ahead of next year’s elections in Türkiye, which will take place on the eve of the Republic’s second century, Mitsotakis attempts to fuel hostility instead of good neighborly relations. That is a development that no politician in Türkiye could ever ignore. Greece’s actions increasingly dominate the nationalist argument, with the government and the opposition accusing each another. It would not be surprising for this issue to gain further traction on the campaign trail.

The core question is the future of 'table': İP or HDP?
Next
Loading...
Loading...
We use cookies to ensure that we give you the best experience on our website. If you continue to use this site we will assume that you are happy with it.Ok